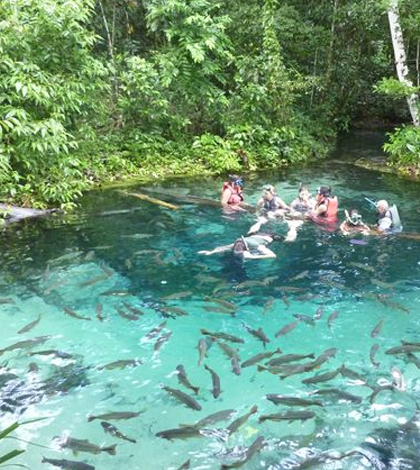 Tourists in Brazil interact with fish in a tributary of the Culabá River. (Credit: Benjamin Geffroy)

A study led by scientists at the University of California, Los Angeles, finds that ecotourism — often meant to help conservation efforts — could actually harm animals that tourists are looking to protect, according to a release. This is because of the effects that repeated human exposure can have on animals.

Researchers at the school analyzed more than 100 studies in the work and uncovered connections between ecotourism and several effects on animals. These include diminished responses to the presence of humans, which they say could translate to delayed reactions to predatory attacks. Another was that animals observed by humans, like vervet monkeys, tend to act out more when we’re around, presumably because their predators stay away.

Protected areas around the world get more than 8 billion visits each year, researchers say. They add that the effects the visits have on animals could be considered another rapid environmental change produced by humans.

Top image: Tourists in Brazil interact with fish in a tributary of the Culabá River. (Credit: Benjamin Geffroy)