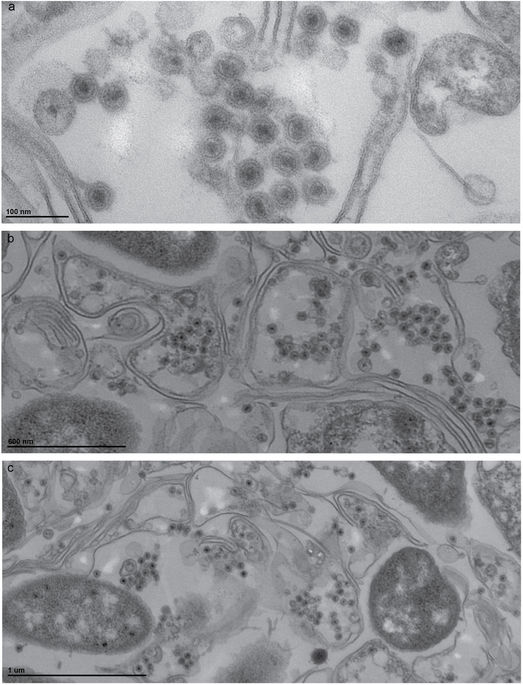 Members of the Autolykiviridae are non-tailed viruses that may form tail tubes on contact with cells. (Credit: Kauffman et al.)

New research from MIT and the Albert Einstein College of Medicine has identified a group of killers that have been at large in our oceans for an unknown period of time: non-tailed viruses responsible for regulating populations of bacteria. These viruses have been undercover indefinitely, because although they have dominated oceanic water samples, they’ve never been subjected to analysis before, out of reach of standard tests.

The variety the team describes is called Autolykiviridae, after Greek mythology’s Autolycus, who was extremely difficult to catch, an expert in covering his tracks. Dr. Kathryn Kauffman of MIT’s Parsons Laboratory for Environmental Science and Engineering spoke to EM about the discovery.

“Scientists knew that non-tailed viruses dominate surface oceans (from electron microscopy images), but we didn’t know who they infected or what their genomes looked like,” explained Dr. Kauffman. “Though the Autolykiviridae that we describe are just one type of non-tailed viruses, they have helped us to learn that the way viruses are commonly sampled and analyzed has likely led to many other related non-tailed viruses also often being missed. And yes, because most double stranded DNA bacterial viruses isolated from the ocean have tails, we were initially surprised to discover that we had non-tailed viruses in our collection and also that many of them had such noticeably broad host ranges.”

In other words, the discovery has highlighted a probable blind spot in our current understanding of bacterial diversity—a significant omission of notable ecological relevance. Unlike their tailed cousins, these non-tailed viruses are not confined to infecting one or two bacteria, but can infect dozens of species.

“The impacts of viral infection on bacterial populations are complex—whether they represent boon or bane can depend on the time frame and the scale, and predicting the impact of viruses on microbial systems is an important area of continuing work,” details Dr. Kauffman. “As we show that DJR [double jelly roll] viruses are far more diverse than currently known, and that their impacts on hosts can be quite different from the traditionally studied tailed viruses, our work highlights the importance of ensuring that the scope and methods of future studies are designed to include non-tailed viruses.”

Tracking down the elusive suspect

The team cultivated hundreds of viruses from seawater using methods that they now know allow the Autolykiviridae to survive and be detected.

“Where other studies might often use chloroform to remove contaminating bacteria from their virus samples, we did not—this was fortuitous because chloroform renders the Autolykiviridae and other lipid containing viruses uninfective; had we used it we wouldn’t have seen them, Dr. Kauffman states. “We also used a cultivation approach that prevented viruses from overgrowing each other in lab, and we waited two weeks to harvest our samples—in this way we were able to detect killing by the Autolykiviridae, many of which took longer than the traditional viruses to reveal their presence by killing their hosts in agar overlay assays.”

The team was also able to sequence the DNA of the Autolykiviridae and study their physical properties because they were able to cultivate the viruses and amplify large numbers of them. This revealed that they are also subject to loss in several other methodological approaches commonly used in studies of viruses. “For those interested in performing future isolation studies of bacterial viruses that are not biased against viruses like the Autolykiviridae, we recommend not using chloroform or density gradients during isolations, using agar overlay approaches rather than enrichments, allowing for extended incubations of at least several days and up to several weeks, and being sure to include protease treatments during extraction,” adds Dr. Kauffman.

Does the slower killing of bacteria by these tailless viruses in the lab mean that they are slower killers in the wild? Not necessarily.

“It may be, for example, that the receptors on the bacteria that the viruses need to attach and enter the cell are not expressed in laboratory cultures until the bacteria are stressed, but if those cells are more commonly stressed in the wild then those receptors will be more readily available and viruses might infect their hosts there quite quickly,” Dr. Kauffman explains. “In any case what it does suggest is that the non-tailed viruses can interact quite differently with their hosts than the tailed viruses, and so until we understand that better we are still missing part of the story.”

And while predicting the functional consequences of the presence of different viruses in microbial communities is likely to remain a challenge, studies that attempt to tease out these kinds of questions, such as how important different varieties of viruses are to water quality, will be far more effective once all viral actors in the system are accounted for.

“The greatest impact of our work is not the discovery of the new virus family per se, but rather that we show that non-tailed dsDNA bacterial and archaeal viruses are far more diverse, abundant, and active than is currently appreciated, and that biases in methods that we, as a field, thought might not matter much, in fact probably do matter quite a bit in terms of getting the full story,” adds Dr. Kauffman.