USGS makes its topographic maps tool easier to use 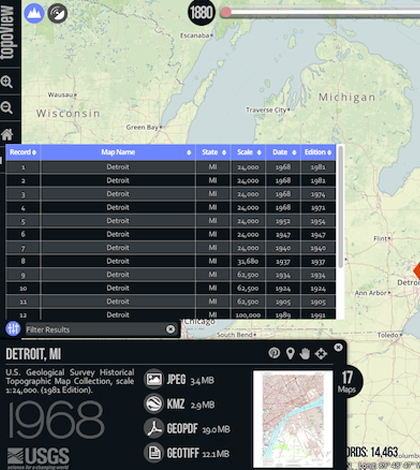 Officials at the U.S. Geological Survey have updated the way that its topographic maps database can be accessed to make things more useful for average citizens, according to Great Lakes Echo. The agency has launched a new website, called topoView, which replaces its old site providing access to the maps.

The new website lets anyone access and download nearly 180,000 USGS maps dating back to the 1880s. Using the interface is as simple as clicking on a region of the United States and then choosing a map scale and date range.

The need to update the tool became clear after its old version routinely confused and slowed down scientists who had to download maps for government projects. Developers of the new tool say it’s now more useful for researchers as well as average people who enjoy exploring areas with old maps to see how they’ve changed over time.