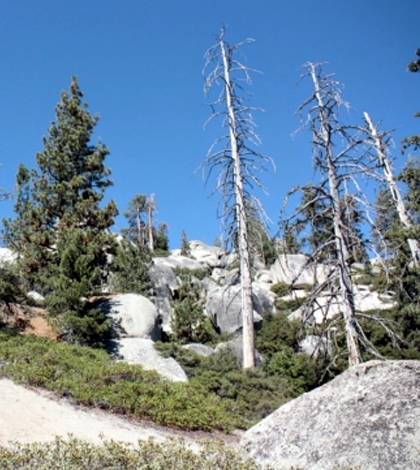 As tree die-offs result from climate change, drought, fires and beetle infestations, shrubs may take their place, but that doesn't mean more water will be available downstream in the Sierra Nevada. (Credit: Ryan Bart / University of California, Santa Barbara)

Precipitation is important for stream flows in the Sierra Nevada mountains, but new findings from scientists at the University of California, Santa Barbara, indicate that surrounding vegetation changes due to climate warming may have just as great an effect. In some cases, the impacts of vegetation changes were found to have greater effects on stream flows.

Scientists at the university used a regional hydrological model in the effort to consider the possible future distributions of vegetation in the Sierra Nevada. The two main types of vegetation they looked at were shrubs and trees.

Though there is a conception that trees are always going to use more water than shrubs, the investigators found that notion didn’t always hold up. In two Sierra Nevada watersheds where they considered multiple mixes of vegetation type, it became clear that how much water gets used really depends on the plant.

So some large shrubs use as much water as a tall tree. And if the tree is small enough, it’s easy for it to take in less water than a larger shrub. The only case in which the conventional thought held up was with small shrubs compared to large trees. With that scenario, shrubs did indeed use less water.

Findings of the work, full results of which are published in the journal PLOS ONE under open-access license, matter because of the likelihood that more areas in the West will be struck by wildfires that have become more common thanks to warmer conditions and drought. Large fires are especially damaging and clear out huge areas of trees, opening up space for shrubs to move in.

While some forest-to-shrub land conversion scenarios that scientists considered did result in higher stream flows, shrub-dominated landscapes weren’t found to always result in more water for Sierra Nevada streams. In addition, researchers mostly found that increases in stream flows will likely only be seen in wet years. During dry years, it doesn’t matter if there are trees or shrubs. Each vegetation type will be able to exploit the water that’s available.