Wetlands Give $450,000 Worth Of Annual Flood Protection To Vermont Town 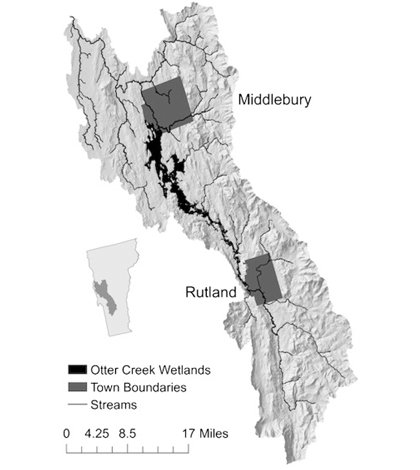 Map of wetlands around Middlebury and Rutland, Vt. (Credit: University of Vermont)

Despite knowing that wetlands are important for protecting against floods, it isn’t so easy to prove that they are. But one recent attempt by researchers at the University of Vermont has done a good job, even quantifying the monetary value in flood protection that some local wetlands provide.

Using stream gauge data from the U.S. Geological Survey, investigators at the university studied recent flood frequency for a section of the Otter Creek floodplain, near the towns of Middlebury and Rutland, Vt. They analyzed 10 flood events that have taken place on the creek to assess how much protection its wetlands have yielded.

Essentially, scientists used the stream gauge data to calculate how much more water would have struck the towns had the wetlands not been in place. From there, they used federal flood insurance models to estimate the damages that could have occurred with flooded homes and buildings.

These efforts revealed that the natural wetland barriers saved the town of Middlebury up to 78 percent of potential damage from flooding. That amounts to about $450,000 each year.

Not only are the results of the work impressive, but the methods that investigators used to make the findings may prove useful for other wetland scientists. In addition, the results make a powerful argument for protecting wetlands to reduce flood vulnerability.

The study is the first to calculate the economic benefits that river wetlands and floodplains have provided during major storms that have struck the U.S. East Coast in recent years. Full results of the work are published in the journal Ecological Economics.

One of the practices that threatens wetlands and their flood-buffering effects is the straightening of rivers to keep water from new developments. While this may help nearby, it often sends more waters to downstream areas, enhancing their flood risks.