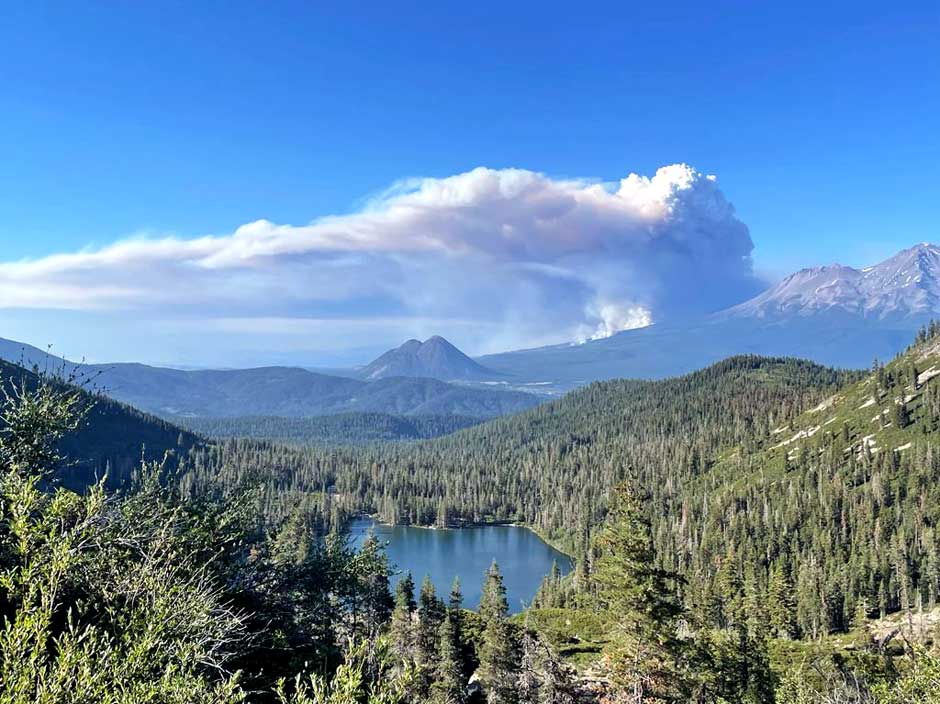 Smoke from the Lava Fire behind Castle Lake in 2021. (Credit: Erin Suenaga)

Wildfires have been big news the last couple of years. Australia’s wildfires in 2019 and 2020 and the Amazon rainforest fires in 2021 made headlines around the world. The American west has had record-breaking burns in recent years, blanketing cities in dangerous amounts of smoke and sending haze across the continent to the east coast.

While smoke has clear and apparent effects on the sky, new research finds it changed the ecology of Castle Lake, a freshwater lake in California, in 2018.

“There are some studies that have analyzed the effect of human health in respiration with the smoke of wildfire,” said Facundo Scordo, a postdoctoral researcher at the Global Water Center of the University of Nevada—Reno. “What we found in the paper is that the respiration of the lake has been affected by the smoke in the same way it affects human life.”

Smoke can alter a lake’s temperature and primary production. It can even change where fish are. During a particularly smoky period, rainbow trout that regularly turn up in shallow water sampling were gone.

“We were very surprised because we come every year and, with the same methodology, this is the first time [no rainbow trout were caught],” said Scordo who authored the study on Castle Lake in California with a team from University of Nevada—Reno, Rensselaer Polytechnic Institute, Miami University (Ohio), University of California—Davis. The paper was recently published in Scientific Reports.

Changes to the lake’s ecology occurred up and down the food web, down to the very bottom.

Smoke cover reduces the light available to algae. Both photosynthetically active radiation and UV-B radiation. Photosynthetically active radiation fosters algae production and, under normal conditions, penetrates deeper into the lake. While much of this light is blocked by shallower algae, deeper algae have evolved to use the smaller amount of light that comes through. This is usually where the maximum concentrations of chlorophyll are found in the lake.

Under smoky conditions, photosynthetically active radiation was reduced enough that this maximum never developed, Scordo and his colleagues found.

“So both good and bad light were reduced,” Scordo said. “But the good light penetrates to the first meter of the lake.”

Primary production actually increased in the shallower parts of the lake, leaving them murky and unattractive. Castle Lake is used recreationally by campers, hikers, swimmers, and fishers.

Besides the murky, unattractive water, recreational fishers would feel the effect of another surprising finding in Castle Lake.

Fish apparently abandoned the lake edge for deeper water. No brook or rainbow trout were caught in places they normally occur. It’s hard to say where in the lake they went because technical difficulties knocked sonar monitoring offline for the 2018 season.

“If we had those sonar deployed in that smoke year we could have explained the whole trophic chain,” Scordo said. 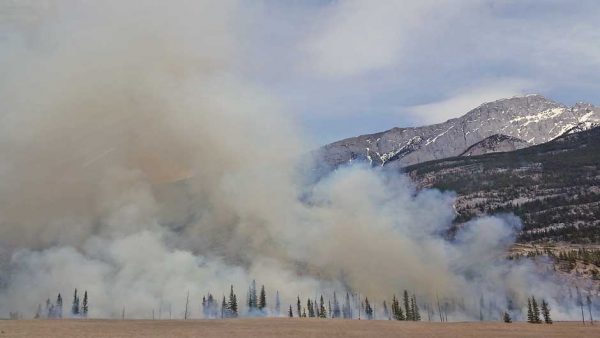 Wildfire smoke can alter lake ecology by altering the amount and type of sunlight that reaches it. (Credit: Jackie Burton/Pixabay)

At the Forefront of a Growing Issue

This research is some of the first research to look at the effects of wildfire from a distance. Similar studies in different lakes are planned.

The study demonstrated that wildfires can affect lake ecosystems that are hundreds of miles away from them. In 2020, smoky haze blew from California to the United States’ east coast, raising questions about the effects of smoke on a national level, Scordo said. (While 2020 saw more fires and more area burned, for Castle Lake 2018 was the smokiest on record.)

The reasons behind the trend of larger and more intense fires is still debated, but climate change is one clear culprit. Much of the western United States is gripped in a serious drought and record high temperatures in June point to the reality of a hotter and drier climate in the future. Climate change may mean that snow melts sooner, leaving soil and vegetation drier. It may allow populations of tree-killing pests to expand in size and range, creating more dead vegetation that burns easier.

The highly visible transport of smoke across the United States and this research shows that wildfire response and risk are not just western and California problems. Ecosystems, like Castle Lake, which aren’t burned directly, still feel profound effects.

“Not only the lake that is in a basin that is burning can be affected, but lakes 100 to 1000 miles from where the fire is burning,” Scordo said. It warrants a national response, he said.

There are still plenty of questions to be answered about smoke and aquatic ecosystems. Scordo says research into smoke’s effects on other bodies of water, the length of the effect and if there are any cumulative effects for water frequently covered in smoke.

New PhD students at the Global Water Center of the University of Nevada—Reno will begin examining smoke’s effect on other types of lakes soon.

With the rate of wildfire in the west, researchers should have plenty of opportunity to answer the other questions, too.