With Cameras and Artificial Intelligence, Fishing Vessels are Becoming Smarter 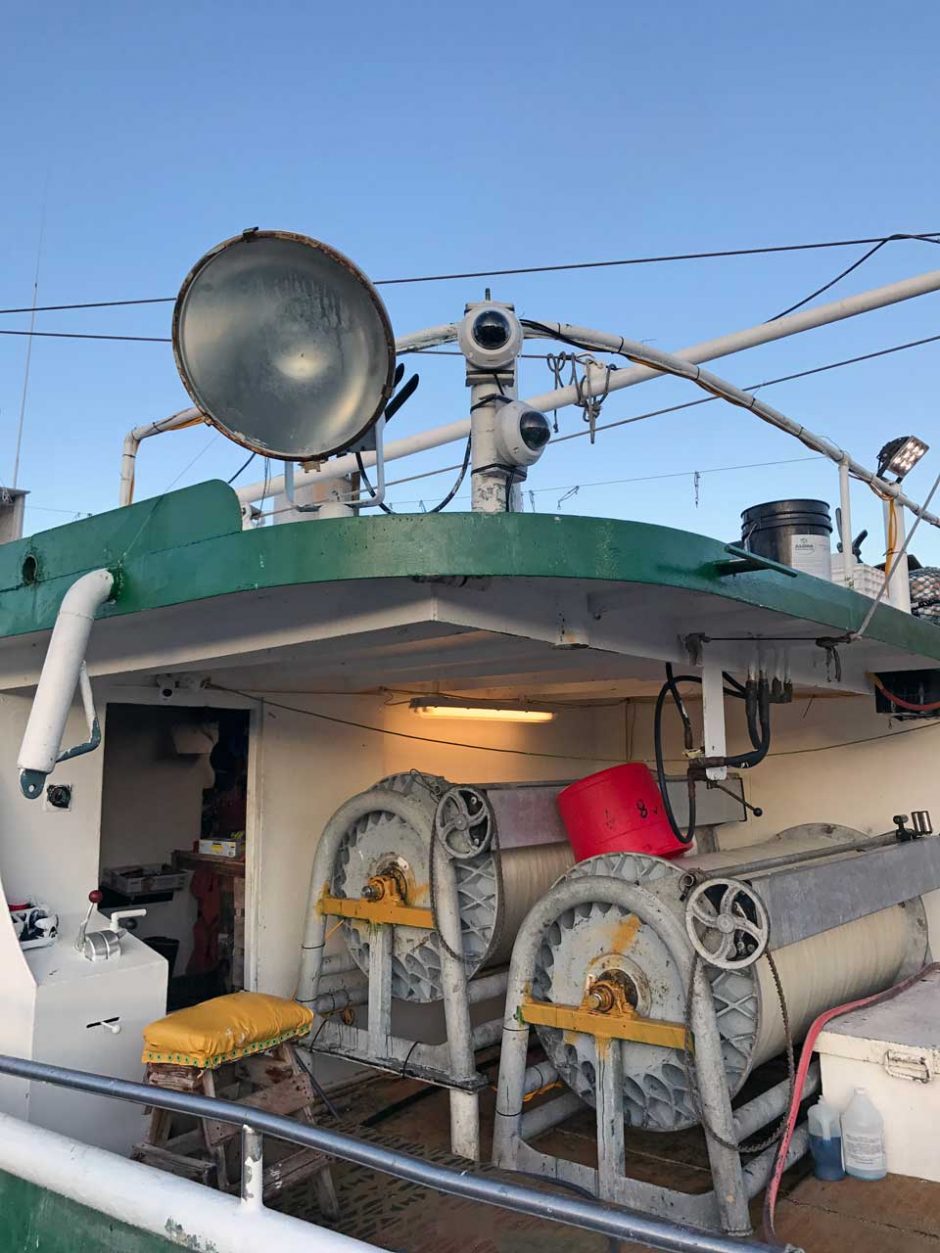 An extended photo of where cameras are outfitted on shipping vessels. These vessels go out searching for all kinds of fish across all adjacent waters in the United States. (Photo Credit: NOAA)

During an electronic monitoring conference in February, fisheries managers and fishermen watched a squiggly purple line meander across the screen. It was mapping the journey a tuna fish was taking, from being caught and landing across the deck of a fishing vessel.

Leigh Habegger, executive director for Seafood Harvesters of America, a national commercial fishing group, said everyone in the crowd had their eyes glued to the screen.

“It was fascinating, it was really cool,” she added.

The graphic was the manifestation of a machine-learning tool that was trained to follow where a fish ended up after it was caught. Depending on if the fish was stored for harvest or discarded is important for fishermen hoping to obey federal catch regulations, and for researchers looking for the most accurate data concerning fisheries.

Machine learning, or artificial intelligence, represents one of the next jumps for environmental monitoring operations. An industry beginning to evolve is starting to incorporate some of the most advanced forms of technology to assist its growth.

“We’re tracking 460-470-plus fishery stocks throughout the U.S. An important component is collecting the best available information to assess each stock in terms of total biomass,” said Brett Alger, the electronic technologies coordinator for the National Marine Fisheries Service. “Part of that exercise is determining what could be removed from a stock sustainably, and then monitoring those removals (landings and discards).”

For most of the commercial fishing industry’s regulated history, fishermen relied on human observers and paper logbooks to do the counting. The fishermen sometimes have to pay to host an observer on board their vessel, to quantify the length and weight of the catch, identify the species type and note whether it was retained or discarded. 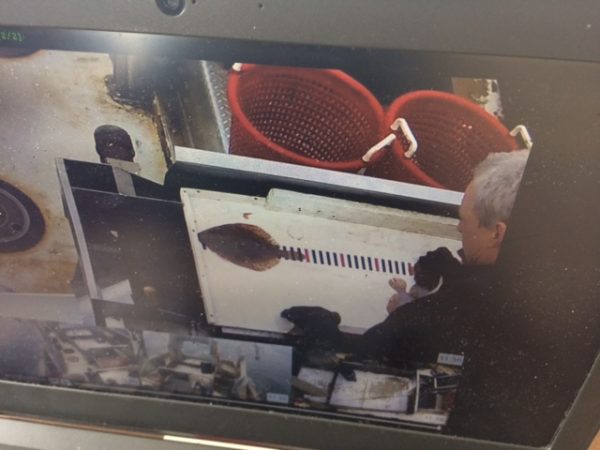 However, hosting another body aboard a vessel can be difficult to accommodate for fishermen, and expensive as well.

“The cost of sending a human out to sea is pretty large,” Habegger said. “Not only does the ship or fishing vessel have to have a place for them to sleep, they have to feed them. They also have to cover the cost of their work.”

For catch that is landed and not counted on board, dealers and processors purchasing the catch must report the data.

However, in the last seven to 10 years, fishermen have been incorporating more technology-based monitoring programs, like cameras collecting imagery of each catch event aboard the vessels.

It can be cheaper, more efficient and by expanding data collection, may assist the fishermen in better understanding where they might have more success next time they go out.

Camera-based electronic monitoring uses cameras and other sensors installed on the vessel to detect when fishing gear is being used, or a catch is being hauled in. Those catch events are stored on a hard drive in the wheelhouse, the “brain” of the system. Once fishermen go ashore, the hard drive is mailed to an office where the video is reviewed and prepared for scientists, managers or regulatory enforcement for further use. Moving forward, systems are utilizing wireless data transmission via satellites and cellular coverage, rather than using hard drives.

While the data can help inform fishery removals from the total biomass of a stock, it can also help researchers better understand the discard mortality of fish thrown back to sea.

“There’s a lot of science on discard mortality. When you throw back 10 fish, how many will die?” Alger said. “For example, research based on haddock reveals the discard mortality might be different if it was caught on a hook or in a gillnet or a trawl.”

“That’s the basic 101 of what EM (electronic monitoring) has looked like for a long time,” Alger added. “But with computer vision and machine learning applications coming on rapidly, now we can start to run those types of applications on the vessel themselves.” 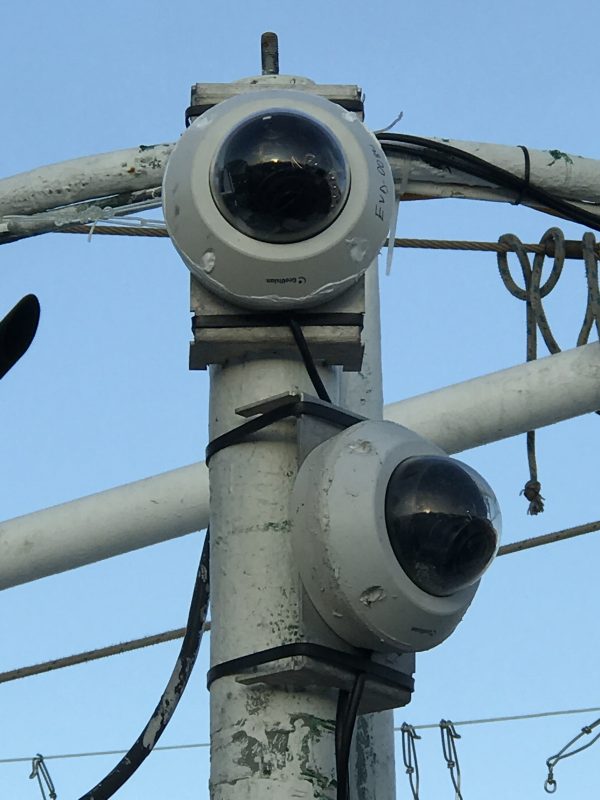 One of many cameras outfitted on fishing vessels that assist both fishermen and regulators count how many fish are caught and kept or discarded. (Photo Credit: NOAA)

New AI applications being studied out of Hawaii showed off many of these capabilities. In a demo of some of the technology, a computer could determine if a fishing line has a fish hooked before human eyes ever could. It could also identify if a shark had gotten snagged on the fishing line before a human observer would be needed to identify the species.

AI can also be trained to measure the length of a fish and discern its weight from original measurements.

The merger of fishing vessels and technology is turning the industry’s fleet into mobile computers that researchers hope will be capable of doing most of the monitoring onboard and wirelessly sending that data back to land.

“There’s a lot of great things on the horizon, we’re just on the cusp of it,” Habegger said. “It’s going to be really cool to see how much fishery monitoring changes with the advancement of tech in the next 5-10 years.”

Another facet of environmental monitoring that’s largely untapped is the burgeoning data collection method of eDNA or environmental DNA. Scientists want to take small samples of water from a fishing area or fish tank that will indicate just how many species are prevalent.

This new bit of tech could improve the monitoring and traceability of seafood markets, for example, validating data reported from fisheries landings. It could also benefit researchers when conducting hydroacoustic surveys of fish beneath the vessel.

These adaptations aren’t mainstream yet. But Alger and Habegger said the next few years will be very telling in how the fishing industry incorporates the new tech for data collection.

“We ask a lot of fishermen. They have often been required to use very siloed systems,” Alger said. “In order to develop partnerships with fishermen and raise the expectation of what we can collect from their vessels, it needs to be a very transparent and healthy conversation with how data are collected, what the data are being used for, and ideally how we can integrate systems and simplify reporting.”