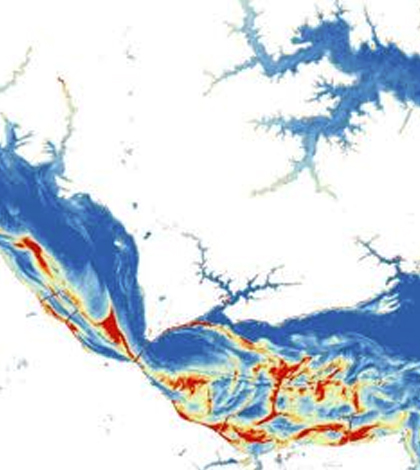 Chlorophyll in the lower York River on Aug. 29, 2016, as indicated by the ESA Sentinel-2A satellite sensor. (Credit: European Space Agency)

Last year, we covered a project led in part by scientists at the Virginia Institute of Marine Science (VIMS) who were using airborne data and measurements from the ground to learn more about a new type of algae proliferating in the York River. Alexandrium monilatum is its name and it’s known for having the ability to bioluminesce.

Among the findings that researchers gleaned from that effort was the specific range at which airborne sensors can best measure the alga’s peak blooms, around 705 to 710 nanometers. But that find was made toward the end of the effort, and very little data was gathered on it.

VIMS investigators just didn’t have enough access to hyperspectral sensors that could image the algae’s peak in 2015. But this year, scientists were able to make sure that the right sensors were imaging the blooms to gain greater insight.

They obtained imagery of the York River’s blooms from the European Space Agency’s Sentinel-2A satellite. That satellite is equipped with high-resolution sensors capable of measuring around the 700-nanometer wavelength. The sensors are capable of measuring in the specific set of wavelengths that were found to be key for tracking chlorophyll in the river’s water and have an impressive resolution of 108 square feet.

But VIMS researchers are still looking to advance their algae measurements beyond that. In the future, they’d like to implement the use of unmanned aerial vehicles to gather imaging data. And one day, they see hyperspectral sensors getting so good that they may be capable of distinguishing different types of algae from one another.