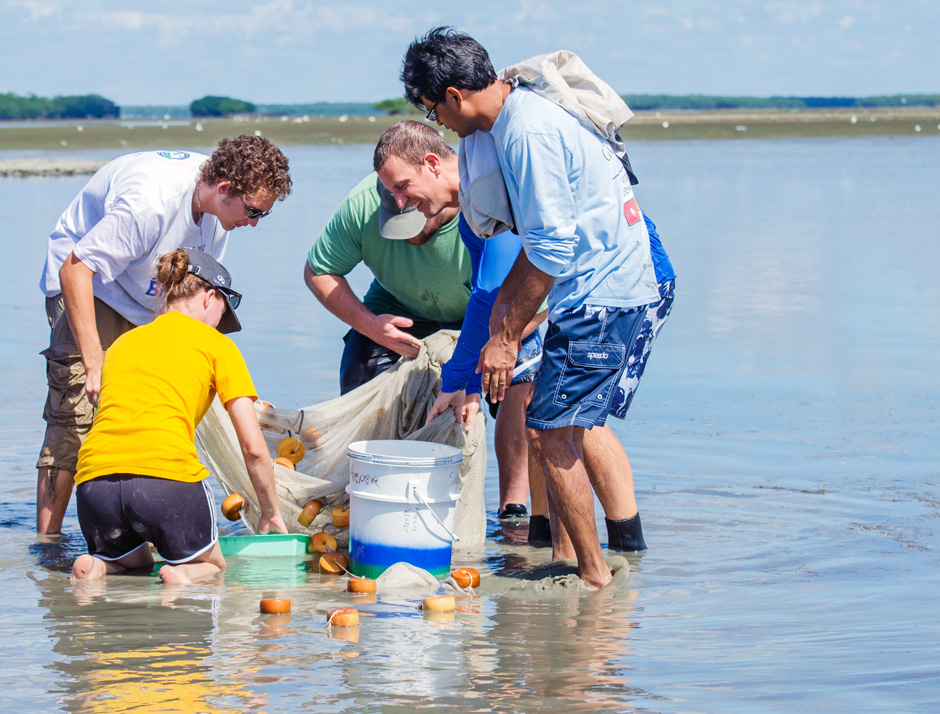 A clean environment doesn’t just mean improved biodiversity and fresher air. It also means increased real estate demand. That fact was cemented in 2015 after a Florida Realtor’s report tied hundreds of millions of property values to the Secchi disk depth of the surrounding water.

The report was explicit about how important the environment was and how it should be treated as such.

“Policymakers and the public would benefit from research into the possible effects of Everglades restoration on water quality in the estuaries of Martin and Lee Counties,” concluded the report.

The region’s water clarity is defined by a long list of environmental factors, ranging from native oyster populations and seagrass health to the ratio of fresh to saltwater populating the riverways, and weather events that alter local conditions.

When all of these factors sync up, they create what Dr. Michael Parsons of the Vester Field Station calls ‘sweet spots.’ When they don’t sync up, the ecological balance is disrupted and organisms stress. Somewhere along the way, property values also decline.

“We’ve played a big role in monitoring the ecological conditions so when they (policymakers) are managing water flow, these sweet spots should be targets for when water is released and when water should be held back,” said Parsons.

“So we’ve really helped the process by providing the data looking for these sweet spots,” he added.

The Vester Field Station at Florida Gulf Coast University isn’t just at the scientific center of this environmental monitoring, but the geographical one as well. Built on the south end of Estero Bay, the freshwater basin before the estuary waterways, the field station is constantly measuring the region’s water flow and the environmental impacts that stem from it. 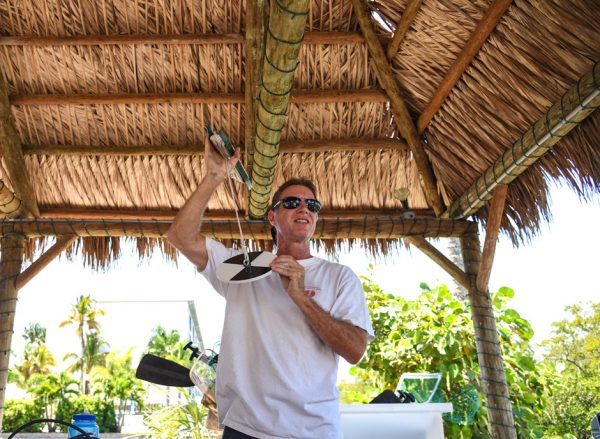 An official working with the Vester Field Station holds up a secchi disk, one of several pieces of equipment researchers use to study water quality. (Credit: James J Greco / FGCU)

Estuaries are dynamic ecological phenomena and the amount of salt and fresh water mixing is always changing. When the dry season peaks, there isn’t enough freshwater in the system, which can dehydrate species. When hurricanes barrel into the coast and flood the region, too much freshwater can have a similar, but opposite effect, diluting saltwater and stressing species.

“In both cases, too much hydration, or not enough hydration – it can really throw off your electrolyte balances, your metabolism,” Parsons said. “It can be stressful (on the species). Similar things happen with temperatures, heatstroke, hypothermia.”

When the balance is thrown off, organisms can’t reach their fullest potential, their growth is stymied, and they become more susceptible to predation. Parsons says it can impede an animal’s fitness.

For the Vester Field Station, two of the more significant species they monitor for fitness are the oysters and seagrass.

Both are imperative to the entire foodweb’s survival. Oysters filter feed and eat algae, making the water cleaner. They’re also an important habitat and food source for other species. Seagrasses provide habitat to a diversity of crabs, fish and other animals. They also reduce flow and stabilize sediment, as well as cause it to settle out of the water column.

“They’re definitely connected. They’re the canaries in the coal mine, the sentinel organisms,” Parsons said. “The general assumption we work with is if they’re healthy, everything else is going to be healthy. If they’re unhealthy, chances are all other organisms will be stressed.”

However, since Hurricane Irma made landfall in September of 2017, oyster populations have taken a hit. Their reefs aren’t as widespread as they were 50 years ago. Seagrass mortality has also increased in recent years. 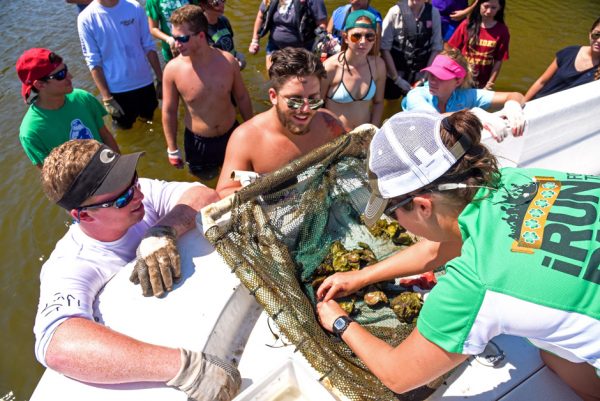 Students at Florida Gulf Coast University rummage through some of the biology collected by a net. Familiar catches include crabs and oysters. (Credit: James J Greco / FGCU)

Parsons said researchers overall are seeing “a system in decline.” Part of what has contributed to this decline are the extreme seasonal events like hurricanes that have bolstered algae blooms, which can deplete water bodies of much-needed oxygen. Too much or too little salinity also oscillates with these extremes, adding further stressors to the system.

To prepare for these events, the state manages runoff by storing and releasing water into the waterways. Massive infrastructure projects over the last 100 years have helped shape how the Florida populace interacts with the environment.

Where Vester fits into all of this is helping decipher where resources are needed to maintain balance, or find its ‘sweet spots.’

“There’s a lot of instruments that we can use to measure different parameters in the water – the chemistry of the water if you will,” said Parsons.

Researchers at the field station use microscopes for zooplankton and phytoplankton, algae and bacteria – with plans to expand environmental DNA work to get a sense of what exactly is occupying the estuaries.

They collect samples of oyster shells, crabs and fish with lift nets, to better understand how diverse – and healthy – the resident organisms are in the estuary.

Researchers even use a pulse amplitude modulation fluorometer (PAM) to measure the photosynthetic rates of seagrass. Parsons said when the instrument sends huge pulses of light to overwhelm that photosynthetic machinery, they can obtain key data on the vegetation.

“By looking at those two differences in fluorescence, the overwhelmed versus what’s being utilized, you can calculate the rate of photosynthesis based on the amount of light going in the photosynthetic pathway,” he added.

The data collected from the PAM helps researchers understand the fitness of seagrass and how it relates to environmental stressors. Maybe the seagrass is diverting more energy toward making seeds or growing. Maybe it photosynthesizes at different rates during different times.

Perhaps it’s photosynthesizing a lot but isn’t growing very much because it’s unhealthy and needs to repair its root tissues. 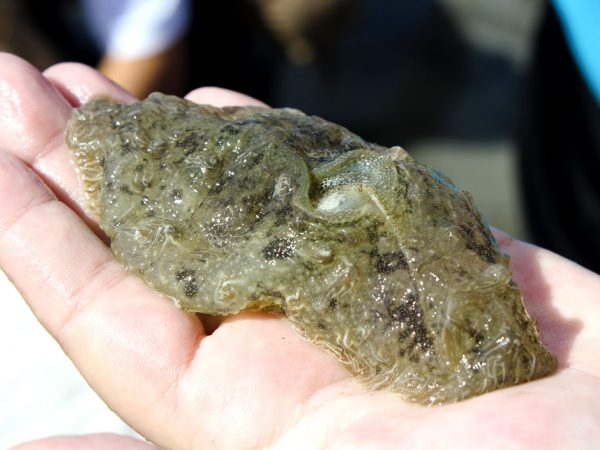 A student palms a Sea Hare found in Florida’s Estero Bay, an aquatic preserve. The students were studying area seagrass, an integral species that exists in the region. (Credit: James J Greco / FGCU)

While researchers may be experts on these environmental stressors, Florida residents and tourists visiting the state are stakeholders to these issues. As the problems have persisted, their presence in people’s lives has increasingly been magnified.

As habitats have diminished, crabs, shrimp and fishes, which are all food that game and commercial fish like to eat, people have watched their seafood product stock decline. Due to severe red tide events, the pinfish, a fish commonly used as bait for fishermen, has also declined.

It’s when these events became human problems that politicians and decision-makers began investing more in solutions.

“What it really comes down to is when you have a lot of water coming off the land, we have to prevent flooding and manage the water for people’s sake,” Parsons said. “(But) we don’t always think about the seagrasses and the oysters, so that’s where some of the issues come in where we have these environmental impacts because we’re not managing necessarily for the estuary health.”

And Florida’s population isn’t getting any smaller. Parsons said almost 1,000 people are moving to the state each week. And a growing population means further pressure on the land and its resources.

“They’re moving down here for the beaches, the estuaries, the mangroves, for the fish and birds that are relying on the oysters and the seagrasses. So they realize we have to invest and protect these resources – it does matter now,” Parsons said.

“Basically, it comes down to a happy oyster is a happy tourist.”