“Accident Of Geography” Brings Rare Galapagos Penguin Back From The Brink 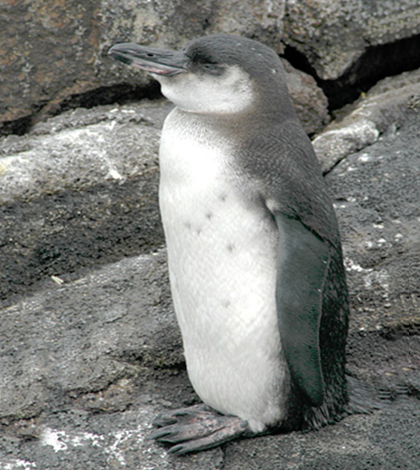 The Galapagos penguin is the second smallest penguin and the rarest in the world. (Credit: Aquaimages)

In the 1980s, the Galapagos penguin — already the rarest penguin in the world due to its range being limited to the archipelago that bares its name — experienced a startling decline, its population dropping by 70 percent.

A new study from the Woods Hole Oceanographic Institution examined satellite data from the past 30 years to determine how a conflux of unusual oceanic and atmospheric events brought in cool, nutrient-rich water to the islands and led to the Galapagos penguin’s resurgence. The results of the study are published in the journal Geophysical Research Letters.

Kristopher Karnauskas, lead author of the paper and WHOI climate scientist, spent a decade studying how the Galapagos Islands influence currents and climate throughout the tropical Pacific, and noticed a growing cold patch of water while investigating surface temperature data in the region.

“One of the most fascinating coincidences I’ve ever come across is that the Galapagos Archipelago is in just the right location, and just about the right size, to block the path of a very important underwater current called the Equatorial Undercurrent,” Karnauskas said.

Comparing the effects of that interaction to an airstream encountering a mountain on land, Karnauskas said that the islands deflect some of that current upward, bringing in cooler water capable of supporting a robust marine ecosystem. Just over 1,000 Galapagos penguins call the archipelago home today — up from only a few hundred in the 1980s. (Credit: NASA)

Examining data from 1982 forward, Karnauskas found that trends indicated a shift in the undercurrent that could have major implications for terrestrial life in the area.

“My inclination was to walk across campus to the biology department and talk to one of my good friends and colleagues who also happens to be a world-renowned seabird researcher,” he said.

Population data on the penguins showed that while their numbers dwindled to only a few hundred in the 1980s — the result of a strong El Niño — they exceeded 1,000 individuals by 2014. This finding coaligned with Karnauskas’ research, which showed that the cold pool surrounding the archipelago has expanded north by 35 kilometers throughout the three decades covered in the study period.

The expansion likely brought more algae — and therefore more fish — to the region, supporting a greater number of penguins on the islands. Karnauskas also noted that the expansion of the cold pool is consistent with trends in the Equatorial Undercurrent reported between 1871 and 2008, and with future projections from global climate model simulations. A study from WHOI examined satellite data from the past 30 years to determine how a conflux of unusual oceanic and atmospheric events led to the Galapagos penguin’s resurgence. (Credit: Snowmanradio / Flickr)

Although Karnauskas admits that three decades provides a relatively short dataset to determine whether these trends are actually connected to anthropogenic climate change, he says that putting the data in context with other long-term trends offers a greater degree of confidence.

“Nonetheless,” he noted, “we cannot be sure this trend will not reverse a decade or two from now.”

While the satellite and atmospheric data helped the researchers connect trends in the currents’ upwelling to the penguin resurgence, Karnauskas said that a collaboration with researchers conducting “on-the-ground” studies could provide even more useful insights.

The study’s findings could help resource managers better develop marine protected areas to conserve the rare penguins, as they illustrate how serendipitous shifts in ocean circulation can give efforts in the region a greater chance of success.

Although it’s exciting to see a species come back from the brink of extinction, Karnauskas warned that the study shouldn’t be used as evidence for an “upside” to global warming.

“This quirky setup of an ocean current getting stronger, running into an island and feeding the penguins is just a coincidence — an accident of geography,” he said. “Other factors such as ocean acidification may well trump the undercurrent.”

Top image: The Galapagos penguin is the second smallest penguin and the rarest in the world. (Credit: Aquaimages)