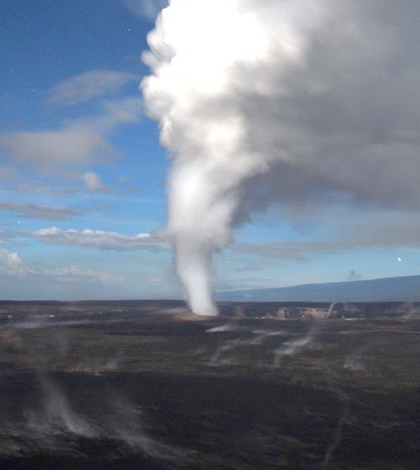 A gas and particle-rich plume emanates from molten lava beneath Halemaumau Crater on the Island of Hawaii. The plume reacts and converts in the atmosphere, forming the acidic volcanic pollution locally known as “vog.” (Credit: Michael Poland / U.S. Geological Survey)

Kilauea Volcano is the most active volcano on Earth, and has been erupting since 1983. The most significant effects of this long-term eruption have been felt by islanders who have to deal with increases in volcanic gas entering the state’s atmosphere, something called “vog.”

The gases are largely comprised of sulfur dioxide, which is a common component of acid rain. In addition, particulate matter, water and carbon dioxide are also commonly ejected from the volcano. Efforts to characterize these emissions have been underway for some time, as have those to turn the findings into useful modeling tools.

Researchers at the University of Hawaii say that gas fluxes from the volcano appear to be increasingly common, and believe their impacts are felt across the state. To learn more about the effects of vog and to come up with strategies to mitigate its effects, the scientists recommend the development of accurate forecasting tools.

A group of scientists at the university has already spearheaded one effort, called the Vog Measurement and Prediction Project (VMAP), which is a feasibility study to evaluate the possibility and usefulness of vog forecasts around Hawaii.

The team involves those from the Hawaiian Volcano Observatory, who have helped develop a model for predicting the dispersion of vog around the state. It uses sulfur dioxide measurements taken from around Kilauea and predictions of prevailing winds to forecast the movement of vog.

Details of the effort are published in a paper in the journal of the Bulletin of the American Meteorological Society. In it, scientists discuss how there is a lot of uncertainty when it comes to characterizing emissions of sulfur dioxide because of meteorological conditions, such as turbulence and winds.

Taking those into account, the researchers go on to describe how they employed a meteorological strategy tailored to the area around the Halemaumau Crater, the emissions’ main exit point, to address uncertainties surrounding under-sampled fields near the vent sites.

Through the effort, the researchers have developed an ultraviolet spectrometer array to provide near-real-time volcanic gas emission rate measurements. They have also developed and deployed sulfur dioxide and meteorological sensors to record the extent of Kilauea’s gas plume to verify modeling efforts.

These tools, scientists say, provide useful information for safety officials and the public, as well as help to raise awareness of the potential hazards of volcanic emissions to respiratory health, agriculture and aviation.

The modeling tool has proven useful for those who suffer allergies or have respiratory conditions because they can use its data and maps as a guide to which areas might become filled with vog in the future. Though not completely foolproof, the model is accurate enough to provide useful guidance, the study indicates.

But this utility appears to be threatened, as funding for the VMAP has dried up. And the lead vog modeler, a graduate student at the university, is set to graduate soon. To avoid that, professors at the school are working with various state and federal stakeholders to jointly fund an ongoing vog modeling effort, but support for continued forecasting has not yet been secured.

Top image: A gas and particle-rich plume emanates from molten lava beneath Halemaumau Crater on the Island of Hawaii. The plume reacts and converts in the atmosphere, forming the acidic volcanic pollution locally known as “vog.” (Credit: Michael Poland / U.S. Geological Survey)