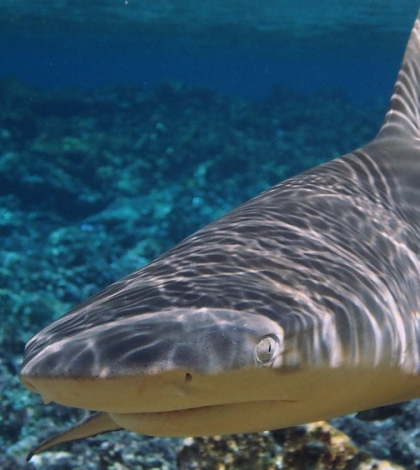 Shark populations aren’t doing too well globally. This has prompted researchers to come up with new and better ways to track them, like using bait strewn around coral reefs to attract sharks so video cameras can count them.

But other investigations have relied on more high-tech ways of advancing the cause of shark conservation. These include the likes of a study led by scientists at the University of California, Santa Barbara, who have used existing technology — dual-frequency identification sonar, a type of acoustic camera — to track shark traffic through coral-rich Palmyra Atoll between Hawaii and American Samoa.

The study area, holding about 5 square miles of coral, is part of the Pacific Remote Islands Marine National Monument that provides a sanctuary for a great number of mobile species including sharks, manta rays and turtles. Within this area, the marine biologists sought to determine just how important the region was as a transit point for sharks as well as the times during the day that sharks most commonly swam through.

Their approach depended on the creation of a sound gate, made possible with the sonar, that could detect when sharks passed by. Investigators left the gate in place for nearly a month while it collected 443 hours’ worth of data. In all, the acoustic camera made 1,196 shark observations. The maximum number captured in a single frame was 10.

With that data, researchers were able to compare shark density and their direction of travel across four tidal periods. The scientists found that smaller sharks, like the blacktip variety, were the most common. That was backed up by visual surveys. And at least seven species of sharks were found to frequent Palmyra Atoll.

As for the time during the day that most sharks pass through, scientists pinpointed that as between 7 and 8 p.m. local time. But investigators were also able to nail down that large sharks transit into the atoll from a fore reef into its lagoons.

This observation is useful, researchers say, because it shows how acoustic cameras may provide better understanding of areas where sharks are rare and other data collection methods aren’t good options. Backing that up, the camera recorded a definitive transit of large numbers of sharks from the fore reef, which hadn’t been directly observed at the site through other methods.

With all of the conservation issues concerning shark populations around the world, researchers see acoustic sonar as part of new technological tools coming online that will be able to better track the fish and understand their behavior in the future.

Before this effort, there had been no other demonstrated way to quantify how often and which sharks were using the Palmyra Atoll. Full results are published in the Journal of Experimental Marine Biology and Ecology.