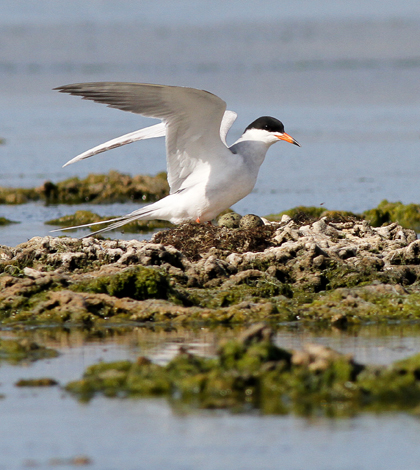 Among the screeching seabirds roosting on a handful of remote islands across the world, specialized microphones stand silently, intermittently recording the racket. Scientists use the recordings to gauge the size of colonies and the effects of conservation projects undertaken to benefit seabirds–a highly threatened group of marine animals.

Recording animal calls to estimate population numbers is a popular tactic among scientists studying whales and frogs, and the method is increasingly being applied to seabirds. Sensors and methods developed by the Coastal Conservation Action Lab at the University of California Santa Cruz are especially useful for detecting annual changes in the number of birds at a nesting site.

Improving remote monitoring for seabird populations is motivated by the steep declines this group of animals is facing as a whole. One analysis shows 28 percent of seabird species across the globe are on the International Union for Conservation of Nature’s Red List of Threatened Species.

Fortunately, some populations appear to respond well to conservation measures, including habitat restorations or the wholesale removal of invasive vertebrates from the landscape.

“They’re hugely effective,” said Abe Borker, a doctoral student with the lab. “Seabirds can increase by an order of magnitude after an eradication project. Being able to measure those changes is really critical.”

But tracking the effects of those projects can be difficult. Getting a team of scientists to some far-flung nesting sites to count birds is expensive. The birds often nest in impossible-to-reach places like cliffs. Many species only visit the colony at night or nest in underground burrows, making them difficult to count. Some species are also sensitive to intruders and will abandon their eggs if disturbed.

That’s where acoustic monitoring can help. By installing unintrusive monitoring stations equipped with omnidirectional microphones, some memory and a computer that restricts recording time to a battery-saving sampling scheme, scientists can capture the cacophony of the colony and use computer analysis to relate the sound to the number of birds nesting there. At least, that was the assumption. A study authored by Borker and recently published in the journal Conservation Biology shows that it was a good one.

The study is based on research conducted in San Francisco Bay on Foster’s terns, which nest in plain sight during the day. That makes the birds easy to count, giving the researchers hard numbers to compare against the estimates from the call recordings captured by their monitoring stations.

The results affirmed that the method can detect large difference in relative abundance based on the number of calls per minute.

“This was the proof-of-concept of what seems like a relatively simple statement, that larger seabird colonies make more noise, and if we go out and measure acoustic activity at a seabird colony we can make educated guess about how many birds there were,” Borker said.

And they can do it at a lower cost sending a team to count birds on a remote island.

The study was based on research conducted in 2009 and 2010, and today the lab already has monitoring projects in place across the world, including Alaska, Hawaii, Chile, New Zealand, and Hawaii.

That’s not a bad batch of places to do fieldwork. Borker, who has helped with sites in California, Hawaii and New Zealand, said it’s a privilege to work in these remote places and walk among such a concentration of life, surrounded by birds both hatching and dying.

“It’s really amazing. You see the entire cycle of life going on right in front of your eyes,” Borker said. “It’s a loud, crazy place to work, but I couldn’t think of any other place I’d rather be working.”