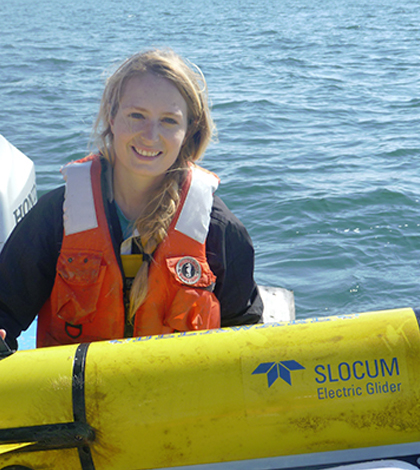 Populations of sand tiger sharks (Carcharias taurus) worldwide have been on the decline in recent years. And though the animals are not endangered currently, they are vulnerable to becoming so.

With their population numbers on the edge, understanding the life cycles and choices of sand tiger sharks has never been more important. To that end, scientists have ramped up efforts to put a pulse on the sharks’ declines and are using a variety of methods to do so. One recent investigation, conducted by researchers at the University of Delaware, relied on acoustic tracking devices implanted in the sharks and a Slocum glider to map the locations of sand tigers down the United States’ east coast, from Delaware’s Indian River Inlet to Chincoteague, Virginia.

“We chose this area to study because previous research has shown it to be an area where sand tigers seem to congregate during the fall and spring as they are migrating in the nearshore waters off the coast,” said Danielle Haulsee, a doctoral candidate at the school and the lead author on a paper detailing the work published in the journal Marine Ecology Progress Series. “Having the sharks congregated increased our chances of encountering sharks carrying tags with the underwater robot, as well as allowing us to measure the environmental characteristics of an area of high use by the sharks.”

Using the glider to take those measurements added an environmental context to the acoustic detections of sand tiger sharks. Traditional, moored, stationary acoustic receivers are limited because they can only detect acoustic pings, says Haulsee. The glider, on the other hand, can detect the sharks’ acoustic tags as well as ocean parameters along the way. A map shows the path of a shark along the Delmarva coast. (Credit: University of Delaware)

Of interest to the researchers during the work were measurements of water temperature, dissolved oxygen, salinity, chlorophyll and color dissolved organic matter, or CDOM. CDOM is a mix of dissolved plant and animal material floating in the water. It typically makes for a yellowish-brown color, says Haulsee.

The glider collected data on those parameters as it zig-zagged its way down the coast over 19 days, encountering some 23 sand tiger sharks. During that time, moored receivers counted 300. The glider’s measurements for most metrics were fairly straightforward, but those for CDOM revealed an interesting relationship about the paths that sand tigers were taking.

“The sand tigers encountered by our underwater robot were significantly associated with nearshore waters that were lower in salinity and higher in color dissolved organic matter than the waters available to them,” said Haulsee. “We interpreted these results to be cues for feeding or navigation while they migrated south along the coast.” Since CDOM is not normally measured in the field as part of shark studies, Haulsee says the investigation is the first, as far as she knows, to show an association of a shark species with its presence.

“From a biological perspective, it makes sense that this parameter might matter to a shark because of their well developed olfactory (sense of smell) systems,” said Haulsee.

The finding, along with others relating to how sand tiger sharks make their habitat selections, will be used to form a species conservation plan to help better protect the species and hopefully prevent the sharks from being listed as endangered.

“Sand tigers are currently considered a threatened species and so it is important for us to take steps now to help their populations recover,” said Haulsee. “In addition, the results from this study will help inform a predictive habitat model for sand tigers in the Delaware Bay and surrounding coastal waters to help prevent bycatch of the species in our area by commercial fisheries.”