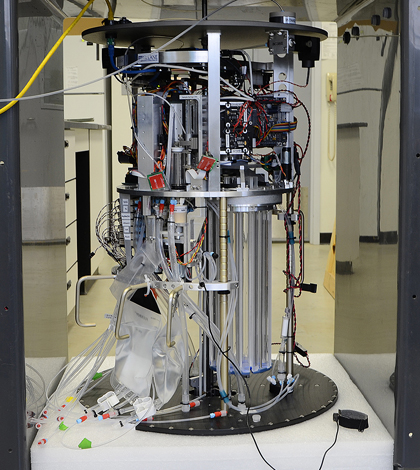 For the water flowing off much of the lands of the Pacific Northwest, the Columbia River Estuary is the last stop on the way to the ocean. But it’s no rest stop: The estuary is an active factory of chemical and biological processes that influence the character of the water that eventually flows into the Pacific Ocean.

“We think of the estuary as a bioreactor that effectively removes, or filters organic matter and pollutants from the water,” said Holly Simon, an associate professor in the Oregon Health and Science University’s Institute of Environmental Health. “And so we’re interested in understanding how that filtration processor works and what factors impacts it.”

The estuarine bioreactor consists of several biological “hotspots” that are the focus of Simon and her colleagues efforts to understand microbiological processes influencing the filtration process. Microbes are the workers in the filtering factory, and an important part of describing their functions involves determining the types of microbes present in these hotspots and how their activities vary over time.

With the help of a pioneering piece of environmental monitoring equipment that has seen only a handful of applications across the country, scientists like Simon can begin painting a clearer picture of how the activities of microbial populations relate to the filtration process in the estuary.

The instrument is the Environmental Sample Processor, or ESP, developed by Chris Scholin and colleagues at the Monterey Bay Aquarium Research Institute. The ESP has been recruited to help the efforts of the Beaverton, Ore.-based Center for Coastal Margin Observation and Prediction, or CMOP, where Simon is an affiliate scientist. The center is a National Science Foundation-funded research and education partnership between several universities, businesses and other regional stakeholders.

The ESP automatically collects water samples from below the ocean surface, either drawing samples at specific time intervals or whenever associated water quality sensors detect certain conditions. CMOP scientists have been working to integrate the ESP into SATURN, the center’s long-term monitoring network of physical and biogeochemical sensor stations throughout the estuary.

But the most pioneering part of the ESP comes from the “Processor” part of its name. Beyond just taking samples, the instrument can perform automated genetic identification tests that previously required water samples to be brought back to the lab for analysis. Once the ESP is fully up and running on the estuary, the tests will happen in-situ. Information about the abundance and activities of specific microbial species sampled from the estuary will be sent back to shore through wireless communications. That kind of power will be especially useful for the estuary, as its many inputs–the river, ocean water, and productive peripheral bays–can make for dramatically variable water quality conditions. Those water quality shifts provide opportunities to capture important ephemeral microbial processes, but they’re difficult to capture if you’re relying on a boat and an armful of sample bottles.

“Interesting things happen in microbial community composition and activities in response to changes in this dynamic environment,” Simon said. “The ESP allows us to target those changes, which is really hard to do if you’re just out there on any given day trying to sample.”

For example, the estuary is occasionally subject to intrusions of high-nutrient, low-oxygen ocean water upwelling along the coast. CMOP scientists will be able to see what effect that has on microbial communities by programming the ESP to collect samples when sensors in the SATURN system detect dissolved oxygen below a certain threshold and salinity above another.

There is still work to be done before the ESP will be broadcasting the results of in-situ genetic tests. Those assays have to be developed for the estuary’s microbial populations. Before that work could begin, CMOP researchers first had to make sure the instrument could sample the estuary’s turbid waters without clogging. The sampling system was designed to work in the clear waters of the open ocean, and it wasn’t clear whether the sediment and organic matter in the estuary would gum up the works. CMOP performed a round of tests earlier this summer and the ESP worked fine.

That those tests happened at all is largely thanks to the efforts of Lydie Herfort, a CMOP senior research associate in the Simon group, who worked closely with CMOP modeler and communications specialist Charles Seaton, and Michael Wilkin and his team from the Astoria field station.

“It takes a small army to get this thing deployed, with the sensors all functioning correctly and the communications working,” Simon said. “And she orchestrated it all.”