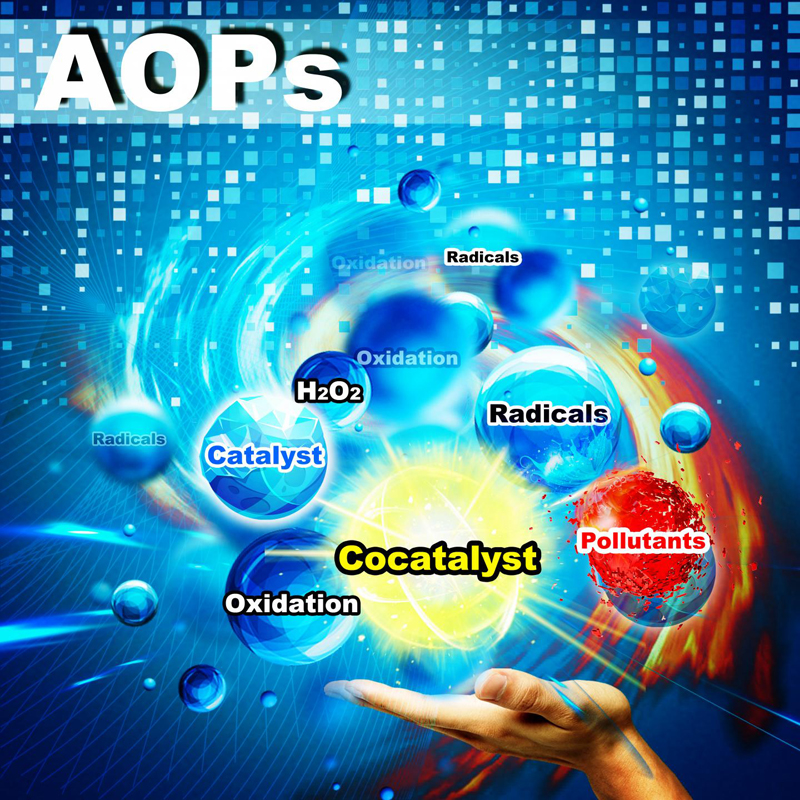 In the ongoing quest for better wastewater treatment, a team of researchers from the University of California, Riverside (UCR) have developed a technique to improve the way Advanced Oxidation Processes (AOPs) remove pollutants from wastewater dramatically. AOPs remove organic materials from water using oxidation.

These AOP reactions take place when hydrogen peroxide, a powerful oxidizing agent, decomposes, leaving hydroxyl radicals along with oxygen and water behind. This makes the processes appealing, but until now they’ve required both a long period of time and large amounts of both hydrogen peroxide and ferrous salt (Fe2+, a divalent iron ion). The Fe2+ acts like a catalyst, but also produces a secondary pollutant in the form of an iron-containing sludge.

Chemistry professor Yadong Yin of the UCR’s College of Natural and Agricultural Sciences and the team have improved the efficiency and speed of AOPs by adding powdered metal sulfide (MoS 2), a co-catalyst.

“Our initial motivation was to improve the efficiency of AOPs,” explains Professor Yin. “The rate-limiting step in the AOP reaction is the Fe 3+ reduction, which requires H +. MoS 2 is known to have the ability to catch H +. We therefore simply thought that by adding MoS 2 can remove H + and promote the Fe 3+ reduction. It turned out that our simple idea was not entirely correct, but the catalytic enhancement with the addition of MoS 2 was real.”

The addition of the co-catalyst also prevents the formation of the iron sludge byproduct.

“For the first time, we developed an inorganic co-catalyst that can dramatically enhance the efficiency of AOPs,” remarks Professor Yin. “The greatest advantage of the metal sulfides based co-catalytic system is that it can help speed up the reaction with decreased sludge production.”

Yin, whose typical area of expertise is in the creation of nanomaterials, is in an unusual work area with this research—but given how the research will continue to progress, it’s an area that makes sense.

“The core technology is the use of exposed active metal sites on metal sulfides to promote the cycling of Fe 2+ /Fe 3+ ions in the catalytic decomposition of hydrogen peroxide in AOPs,” Professor Yin details. “The rate-limiting step in the conventional AOP reaction is the reduction of Fe 3+ to Fe 2+, which can be greatly enhanced by the presence of metal sulfides.”

The team will now be working to further increase co-catalyst performance by creating smaller metal sulfide particles with more surface area—one of the hallmarks of nanomaterial development.

“This is one of the very few papers that I co-authored but do not relate to nanomaterials,” states Professor Yin. “The materials involved are either metal salt or bulk powders. Our next step, however, would naturally move towards reducing the size of the co-catalysts to increase the active surface area and further promote the catalytic performance.”

The team anticipates municipalities being able to incorporate this process into existing treatment plants.

“The process is highly scalable,” adds Yin. “Our collaborators are now carrying out the pilot-scale study on treatment of wastewater. There is no need of major modifications to the process used in the existing treatment plants.”

There may also be consumer and industrial applications for this technology, which is suitable for sterilization and for treating wastewater produced by various industrial processes, such as those containing inks, dyes, oils, and many organic chemicals.

In the future, the team may be able to develop other useful applications for this technology. In fact, it might be effective at removing pollutants in the air.

“The inorganic co-catalytic system is not limited to the solid-liquid AOPs reaction,” clarifies Professor Yin. “It may be extended to catalyze many oxidation reactions involving gas molecules, thus find applications in the co-catalytic removal of volatile organic compounds (VOCs).”