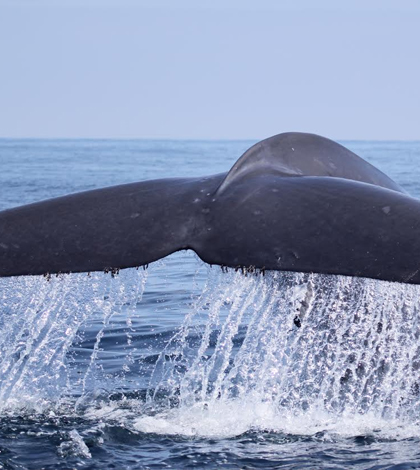 Every year around late spring, blue whales migrate from off the coasts of Mexico and Central America to the shores of Southern California. The seasonal migration allows them to forage through the summer and fall and then return in early winter.

Scientists with the Scripps Institution of Oceanography are interested in how the migration, and behavior of the whales overall, is affected by the presence of U.S. Navy ships in the area, as well as the stability of whale populations there. They have just completed a multi-year study using passive acoustic equipment to monitor blue whales in the Southern California Bight from Point Conception to San Diego. Researchers are interested in both how the whales use the Bight spatially and over time.

“A lot of studies are done through visual means. They’re usually limited to good conditions in the summer and fall,” said Ana Sirovic, marine bioacoustician at Scripps and lead author of the investigation published in Endangered Species Research. “But acoustics, once we deploy them, we can get year-round records. It provides a long-term view of when the animals are calling in the area.”

She and others deployed passive acoustic recorders on the bottom of the ocean beginning in 2006. The devices send pings up into the water column to detect whales in a non-invasive way. They are also equipped with hydrophones, sensitive enough to record frequencies at 100 kilohertz, to measure whale calls beneath the wake.

The battery-powered receivers consist of data loggers, hard disks for data storage and floatation nodes. They are anchored to the seafloor until researchers at the surface send pings commanding them to release their weights and rise to the surface. Data are then manually downloaded for study. A blue whale crests in the Pacific Ocean. (Credit: Regina Guazzo under NMSF Permit No. 17312)

Sirovic says that data collection on the whales is ongoing. But the study’s period, looking at a timeframe between 2006 and 2012, covered some interesting dynamics about blue whale populations in the Bight. The blue whales, scientists say, are mostly distributed close to the shore and near the Channel Islands.

“Looking at the long-term trends from 2007 to now, there seems to be a steady presence of blue whales,” said Sirovic. “That is surprising to see because blue whales were subjected to intense whaling in the 20th century. You would expect the populations to be increasing.”

Those findings are consistent with visual studies, which Sirovic is glad to see. The question then concerns if the population has fully recovered from the whaling or is it something else that’s hindering it?

“We don’t know the answer to that. One possible explanation is that the population here may be stable as the overall population grows,” said Sirovic. “They have expanded their range and are moving north into the Gulf of Alaska.”

That knowledge plays into future work that Sirovic is planning for studying blue whales.

“We’re also interested in understanding the environmental factors that are helping describe the distribution of blue whales we see,” said Sirovic. These include things like food availability, water temperatures and ecosystem production rates. “The next step is looking at finer environmental cues in the ocean itself to see how they distribute themselves.”

Scientists from San Diego State University also assisted in the study. It was funded by the Chief of Naval Operations N45, the Office of Naval Research and the U.S. Pacific Fleet.