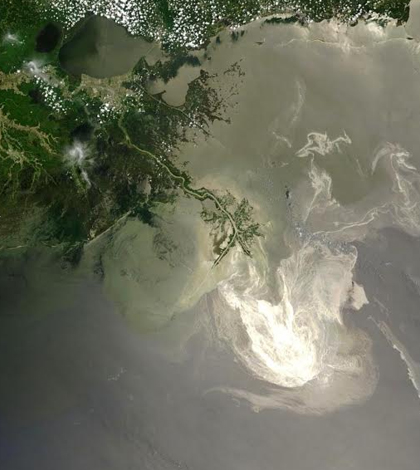 NASA’s Terra satellite captured this image of sunlight illuminating the lingering Deepwater Horizon oil slick off the Mississippi Delta on May 24, 2010, about a month after the spill. (Credit: NASA/GSFC, MODIS Rapid Response)

Oil dispersants used after the 2010 Deepwater Horizon oil rig explosion were plenty effective at dispersing oil, with the main goal of their application being to keep it from sloshing up on beaches and killing animals living along them. But the dispersants had unintended effects on microorganisms in the Gulf of Mexico that could have eaten up some of the oil naturally.

According to a study led by the University of Georgia, the main dispersant used, Corexit, significantly altered the composition of microbial communities in the Gulf. And instead of aiding the natural oil-eating microbes, like Marinobacter, it actually aided microbes that could chow down on the dispersant itself, namely Colwellia.

To make the determination, scientists at the university had to simulate the Deepwater spill in their lab. They were aided in the effort by other researchers at University of North Carolina, Woods Hole Oceanographic Institution, Oregon State University, University of California, Santa Barbara, and Germany’s Max Planck Institute for Marine Microbiology.

The simulations required team members to gather water samples from a site in the Gulf of Mexico where hydrocarbons naturally seep into the ocean. In the lab, they set up microcosms filled with the water and subjected them to a set of treatments meant to mimic conditions during the Deepwater disaster and its aftermath.

In analyzing the treatments, scientists counted microbial cells and sequenced them to identify which species were present. Enzymes that the cells produced were quantified, allowing researchers to gauge how active they were. Scientists also checked the production of the different molecules that were trying to break down oil and leveraged the strength of radioactive oil compounds to directly measure the rates at which things were being degraded.

These techniques helped researchers document the rise of Colwellia, the dispersant eater, and the limitation of Marinobacter, the natural hydrocarbon diminisher. Specifically, scientists found that Colwellia went from 1 percent of the microbes’ total to 43 percent of it in the oil-only water sample. Marinobacter, meanwhile, went from 1 percent to 42 percent, a figure that researchers believe would have been higher had Colwellia not surged.

Results of the study, which are detailed in the Proceedings of the National Academy of Sciences, mean that future investigations looking into the issue will have to consider how dispersants can degrade some organic compounds while enriching others, scientists say.

In addition, researchers say that future study will be needed to address whether the natural hydrocarbon degraders were outcompeted by dispersants or directly affected by compounds derived from the dispersants themselves.

This is not the first scientific investigation that has brought the effectiveness of oil dispersants into question. A 2012 study published in the open-access journal PLOS ONE found that they may have hurt the Gulf’s zooplankton populations. Another study in the same journal, published in 2015, uncovered a link between oil dispersants and gill damage in fish as well as lung damage in humans.

Still other questions remain, including what happened to all the hydrocarbons in the Gulf that scientists simply can’t find. Estimates for the oil not accounted for range from 24 to 55 percent of the total.

Top image: NASA’s Terra satellite captured this image of sunlight illuminating the lingering Deepwater Horizon oil slick off the Mississippi Delta on May 24, 2010, about a month after the spill. (Credit: NASA/GSFC, MODIS Rapid Response)