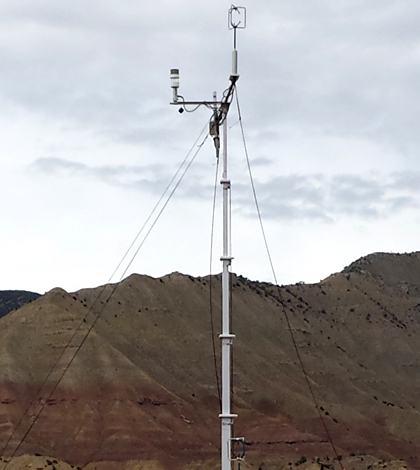 Colorado’s Garfield County has some of the highest oil and gas activity in the state. Not surprisingly, there is a lot of concern locally about air quality near fracking operations there.

A recent investigation led by scientists at Colorado State University has documented the constituents that rise off the county’s natural gas wells from the beginning of gas exploration, involving drilling, fracking and ultimately the collection of gas. The results of the work will be used in an upcoming statewide human health risk assessment planned by the Colorado Department of Public Health and Environment and also have implications for other parts of the nation.

The findings point to an interesting discovery: More volatile organic compound (VOC) emissions come during flowback operations, which is when water and fracking fluids flow up from the ground following hydraulic fracturing. Colorado State U. scientists say they weren’t surprised at the find, noting that their original hypothesis was that the flowback period would convey the highest emissions.

To make that discovery, investigators surveyed 21 new well formations from 2013 to 2015 at different sites around Garfield County. This was possible thanks to significant cooperation from partners in the oil and gas industry.

“We focused on characterizing emissions of VOCS and methane from new well drilling and completions (hydraulic fracturing and flowback) because there was both widespread interest in understanding air emissions and possible health and air quality impacts associated with these operations and a lack of good emissions information with which to examine these potential impacts,” said Jeff Collett, professor of atmospheric science at the university.

Characterizing the emissions involved a novel plume tracer method that let researchers identify and calculate emissions rates of compounds including methane, ethane, propane, benzene and toluene. Most of the experiments included measurement of a suite of 48 VOC emissions. Using acetylene as the tracer gas, researchers employed a mobile plume tracker, to gather real-time measurements of methane, and canisters that collected air samples for three-minute periods. They released the tracer, then located the tracker downwind of each natural gas well pad in order to capture snapshots of typical emissions.

Several sets of canisters were set up at each experiment location and later analyzed in a university lab using gas chromatography. The researchers also performed real-time sampling of methane emissions at each site with a cavity ring-down analyzer. Continuous weather data were also gathered to support efforts to model the dispersion of emissions downwind of the well pads.

“We do also expect our observations of methane emissions to add to a growing body of knowledge concerning emissions from various parts of the natural gas sector, from our work looking at new well drilling and completions all the way through production, gas processing, long distance transmission and distribution to end users,” said Collett.

The data may also help in steps that are being taken to mitigate emissions coming off new and modified natural gas wells both in Colorado and elsewhere. A new rule set by the U.S. Environmental Protection Agency in May 2016 is seeking to limit carbon dioxide-equivalent emissions from those wells by 11 million metric tons by the year 2025.

“One area of useful focus is reducing emissions during well flowback. ‘Green completions’ technologies have been designed to reduce methane emissions,” said Collett, stressing the need for a broader look at how to reduce air toxics like benzene, toluene, ethylbenzene, and xylenes during flowback. “We are engaging with natural gas operators in Garfield County now to help analyze more specifically how measured methane and VOC emissions relate to details of on-site equipment and activities during flowback, with an eye toward identifying approaches to emission reduction.”

Garfield County provided $1 million to fund the investigation. Around $700,000 in additional support came from industry gifts to the university from Encana Corp., WPX Energy, Ursa Resources Group, Bill Barrett Corp., Caerus Oil and Gas and Laramie Energy. Emission experts from government, industry and the National Center for Atmospheric Research helped by consulting with the research team and reviewing findings.

Data from the investigation are published on the Colorado State University website.