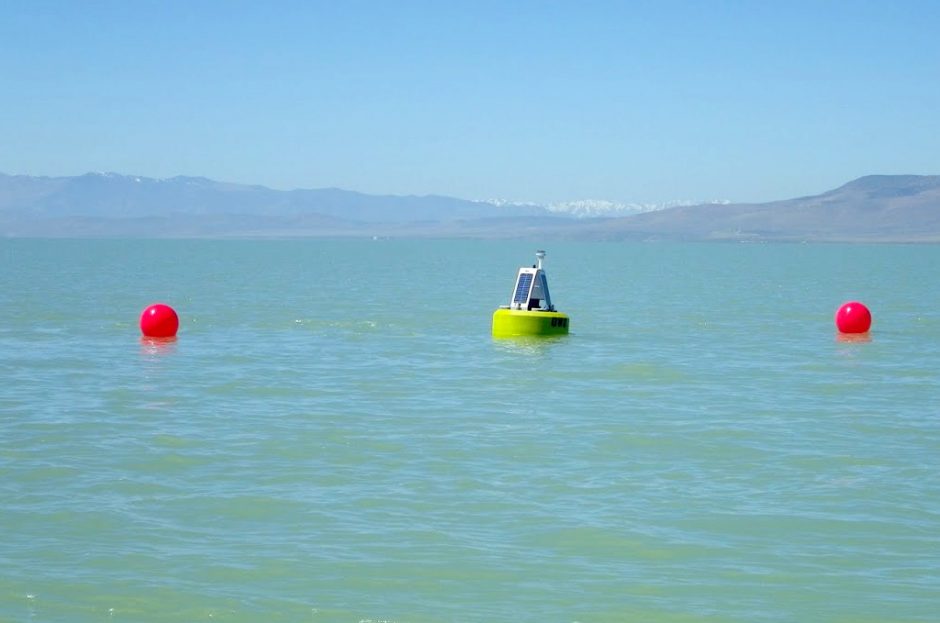 The result of a harmful algae bloom in the summer of 2016, the enhanced Utah Lake water quality monitoring program reached its one year milestone in September.

Located near the Provo and Orem metropolitan areas, the lake is Utah’s largest freshwater body and a popular water recreation and fishing spot. In the summer of 2016, recreation users reported an unusual amount of scum on the surface of the water.

Utah Lake is monitored by the Utah Division of Water Quality (UDWQ). Prior to the 2016 harmful algae bloom (HAB), the UDWQ successfully used regular water sample testing and citizen reporting to stay on top of any incidents. Typically, government agencies will recommend certain water recreational activities be suspended when the cyanobacteria concentration is greater than 20,000 cells per milliliter. When the bloom was reported, water sample tests showed a concentration of 40 million cells per milliliter.

In addition to having excessively high numbers, the bloom also happened earlier in the year than normal. The Utah County Department of Health, along with other coordinating agencies, made the decisions to close to the lake.

“The bloom was a surprise. Shutting down the lake was an unprecedented event. It had never been closed before, for any reason,” said Holcomb.

The bloom was mostly comprised of the cyanobacteria Aphanizomenom but it also included Microcystis, another cyanobacteria that can produce the toxin microcystin. This toxin can cause serious illnesses in humans and animals, as well as the death of aquatic life.

Within two weeks the bloom had run its course and the lake was reopened. Recreation activities, such as boating, at the lake resumed; however, swimming advisories remained through the end of the recreation season.

But the UDWQ knew that their work on the matter was just beginning. They established a plan to enhance monitoring efforts.

“The UDWQ presented a funding proposal to the Utah Water Quality Board. We wanted to be able to get out in front of similar blooms in the future and notify the public before any of our citizens could come in contact with the water,” said Holcomb. With the funding secured from the board, the department purchased three NexSens CB-450 data buoys for the lake. Each buoy includes a YSI EXO Water Quality Sonde. Together the devices measure the turbidity, dissolved organic matter, conductivity, temperature, pH levels, dissolved oxygen, phycocyanin and chlorophyll of the lake around the clock. The buoy utilizes wireless telemetry to log data on the WQData LIVE Web Datacenter.

Seven days of buoy data is available online to the public at all times.

This season, the buoys were deployed in April. As the first year with around the clock data, the UDWQ is coupling the buoy data with sampling from in-lake and tributary inflows to test for nitrogen and phosphorus, and other water quality parameters.

“The buoy data and water sample test data are complimentary,” said Holcomb. “Combined, they provide a very good overall picture of how the lake is behaving this year.”

The method has proven successful so far. An algae bloom was identified and the public alerted before a large number of lake users could be exposed. This year only 37 exposure cases were reported to the Center for Poison Control, an improvement from the 170 cases reported last year.

In addition to providing early notification about HABs, the data is also shedding light on some interesting aspects of the lake’s ecological system. Unlike other lakes in Utah, this lake has shown three different types of algae blooms at the same time.

“Typically, you will see one type at the beginning of the season and then it will progress to a different type,” explained Holcomb. “We don’t usually see three different types at the same time.”

The results show that the near-shore area has Microcystis, the middle has Dolichospermum, and the northern part has Aphanizomenom. Due to potentially different sources, this could result in different mitigations in each area of the lake in the future.

Because this is the first full year with the water buoys, the UDWQ is still determining all of the ways the data can be used and what the permanent monitoring protocol will be for Utah Lake. Moving forward the department will continue to evaluate the data and make decisions about the locations of buoys. If it’s determined that the lake doesn’t require the use of three different buoys, one buoy could be moved to a different lake in Utah.

The department is also planning to examine the data alongside satellite images of the lake provided by the Cyanobacteria Assessment Network to see how the test results match up with the images. The network is a multi-agency project involving National Aeronautics and Space Administration, National Oceanic and Atmospheric Administration, U.S. Geological Survey, and the Environmental Protection Agency to develop an early warning indicator system using historical and current satellite data to detect algal blooms in U.S. freshwater systems. This year, use of this imagery was critical in the identification of an HAB formation in the lake.

Officials involved with granting the equipment funding have expressed appreciation for the project.

“The buoys have been an outstanding tool. The board is working as a partner (with the UDWQ) to have an influence, look at the (water quality) standards and determine the appropriate monitoring levels,” said Tooele County Commissioner Myron Bateman, who serves as the chair of the Utah Department of Environmental Quality’s Water Quality Board.

Recently, UDWQ accompanied local watershed groups and state legislatures on a tour of Utah Lake to discuss the future of the lake. As part of the tour, UDWQ provided up-close inspections of the buoys and discussed the merits for this type of monitoring.

“It was an excellent opportunity for UDWQ to not only discuss, but show everyone how some of our monitoring is conducted,” said Marshall Baillie, an environmental scientist with UDWQ that was instrumental in the department’s real-time monitoring advances.

If first impressions are everything, UDWQ’s enhanced program is off to an impressive start.