America’s Elusive Crayfish and the eDNA that’s Finding Them 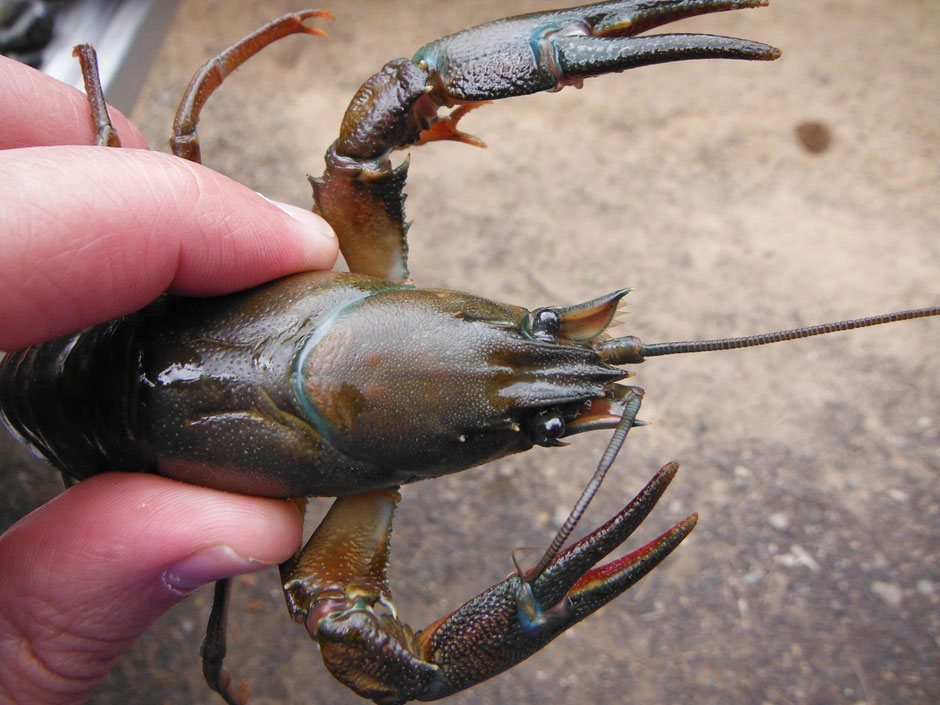 The Shasta crayfish and signal crayfish are two similar looking arthropods on two very different ecological trajectories. As one spreads in abundance, originating in the Pacific Northwest and spreading throughout the world, the other has been reduced to a handful of remaining populations spread throughout one river and its tributaries.

Pacifastacus leniusculus – the signal crayfish – has met few obstacles in its widely successful expansion from the Pacific Northwest southward in California and Nevada, as well as Europe and Japan. By some expert accounts, it has reached invader status. And while invasive species are rarely good for the surrounding food webs, it’s Pacifastacus fortis – the Shasta crayfish – that’s suffered the most at the signal crayfish’s fortune.

Signal crayfish are displacing Shasta crayfish. Believed to have already forced the sooty crayfish (Pacifastacus nigrescens) to extinction, signal crayfish have outcompeted their Shasta cousins to near extinction. However, a growing trend of environmental monitoring, typically referred to as eDNA, is helping scientists isolate the scarce species in an effort to save it.

It was a 2008 research paper out of France that revealed just how feasible environmental DNA could be. The study assessed the effectiveness of this method in monitoring invasive bullfrogs. Compared to more conventional approaches, environmental DNA was far more sensitive to the presence of the species. After the study was published, its findings “sparked a big boom and an interest in looking for evidence of an organism from an environmental sample.”

“This is something that went from one or two papers a year in 2008 to now there’s a journal called Environmental DNA that’s been around for 18 months,” said Eric Larson, an assistant professor in Natural Resources and Environmental Sciences at the University of Illinois. “From marine to freshwater to even terrestrial ecosystems, there will be hundreds of papers this year.”

Among the few well-publicized examples of eDNA pivoting from a kind of proof-of-concept to managerial implementation is government monitoring of bigheaded carp in the Illinois River. As invasive bighead and silver carp neared Lake Michigan, federal officials concerned about its impact on the Great Lakes food systems have deployed eDNA sampling methods in monitoring for potential spread.

But Larson isn’t an Asian carp expert. His field of study for the last 15 years has been native and non-native crayfish populations. He’s researched an array of different crustacean varieties that have found their own niche throughout North America’s rivers and lakes.

The rusty crayfish, an aggressive dark brown freshwater variant, now dominates much of the Midwest’s water systems. The red swamp crayfish, best affiliated with the boiled crawfish dish, is commonly harvested out of Louisiana. The spiny cheek crayfish, known to be a carrier of crayfish plague (Aphanomyces astaci), can call two continents home.

And then there’s the Shasta crayfish, which requires an adequate presence of volcanic rock rubble to allow it cover from predators. They also show off colors from dark brown to brownish green on the top to bright orange and red on the bottom. 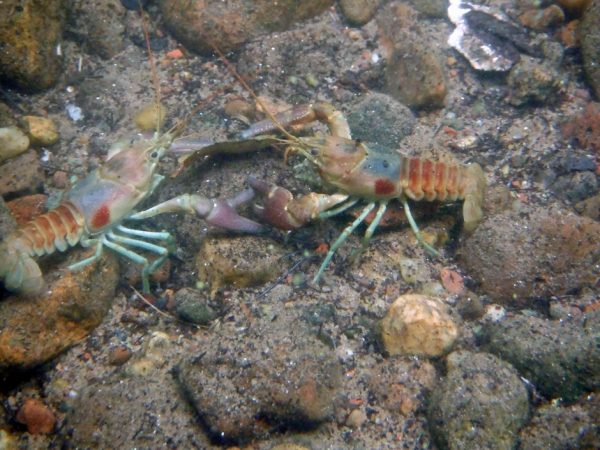 Two rusty crayfish sit on a riverbed. Most commonly spotted in the Midwest river systems, the brown-colored crayfish is an aggressive variant that has displaced other native species in its rapid expansion throughout the Ohio River Basin. (Photo credit: Eric Larson)

A one-two punch of rapid urbanization and expanding displacement has forced the Shasta crayfish “in danger of extinction throughout all or a significant portion of its range,” as the U.S. Fish & Wildlife Service puts it.

For Larson and other crayfish conservationists, preserving the species has meant identifying known habitats where it resides without disrupting the habitat itself.

“For our crayfish, lots of conventional monitoring is by baited trapping. In rivers, conventional sampling would be holding a seining net, flushing things downstream into the net,” Larson said. “For those really rare Shasta crayfish, we don’t want people to go in and disrupt this rare habitat for an endangered species.”

“eDNA is appealing in that case (compared) to conventional methods that disrupt the habitat,” he added.

Environmental DNA is best used as an occupancy tool. When a scientist runs an eDNA test on a water sample, the final result will either fluoresce a certain dye color under sensors if the organism’s DNA is present, or it won’t – signaling its absence. For those looking for a particular species, they might try a quantitative polymerase chain reaction (PCR) test.

Or they could expand the eDNA test by looking not for one species, but a variety of species, which is called metabarcoding. Utilizing universal primers in the PCR sequencing process, the method can tell a scientist all of the animals in a specific area – often useful for those monitoring ballast water discharged by large shipping freighters.

Either method can be an efficient tool when searching for an animal’s presence, and especially helpful when searching for an endangered species without risking a disruption to the habitat. It’s what scientists used to isolate Shasta crayfish populations in a study published in the Journal of Crustacean Biology in 2018. 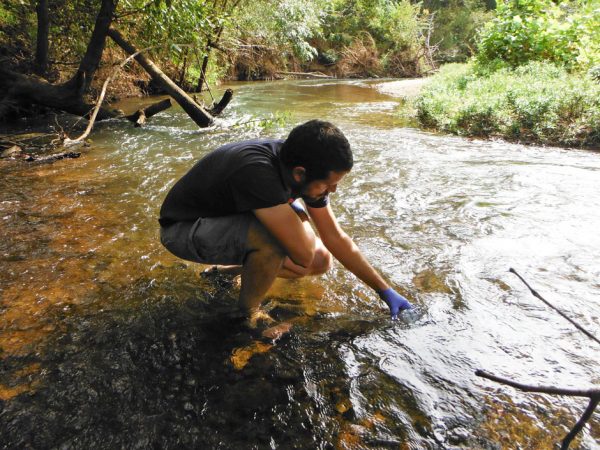 Assistant Professor Eric Larson collects a water sample from a stream in the Missouri Ozarks. Whereas more traditional methods of biological detection require searching for the actual organism, eDNA detection requires only a sample of the water to tell scientists what is present. (Photo credit: Dusty Swedberg)

It’s also what researchers used in their search for alligator snapping turtles, whose status is listed as vulnerable in the wild. It took years of netting possible habitats for scientists to acquire a few samples. Environmental DNA accomplished the feat in half the time.

But it’s also become a helpful tool for identifying sites where invasive and non-native species now reside. For an environmental manager in the Chicago River hoping to reduce the spread of red swamp crayfish, it helps to know if the organism is even present.

“In my case, the work that my lab does is very interested in the field biology side of eDNA,” Larson said. “How do organism’s behavior, the timing of events, conditions, affect eDNA persistence and detectability?”

Advocates hope that one day real-time results will be available for eDNA samples, enabling managers to make faster decisions without expending money and time somewhere they’re not even sure has what they’re looking for. Sampling itself is already quick, requiring only a water bottle instead of extended time, bulky equipment, and extra manpower.

But deploying to the market will require more efficient and timely results. It can take hours before a lab has the result it’s looking for.

It’s still unknown just how sensitive eDNA is at detecting an organism’s presence. Studies done by Larson found the carcasses of dead crayfish won’t be picked up by eDNA methods, helping managers avoid false-positive results. Click To TweetBut it’s unclear what kind of abundance is necessary for detection.

“There are things eDNA is really great at and things it can’t do. Things it can never replace in the fields of fisheries biology or wildlife biology or conservation biology,” said Larson.

The imperfect metric is also limited by what it can measure. Age size or structure, sex ratios, and body conditions can’t be assessed – scientists still need their own two eyes for that.

Additionally, it can be hard to engage people into citizen scientist roles for environmental monitoring when they’re merely sending in a water sample, not finding the real thing.