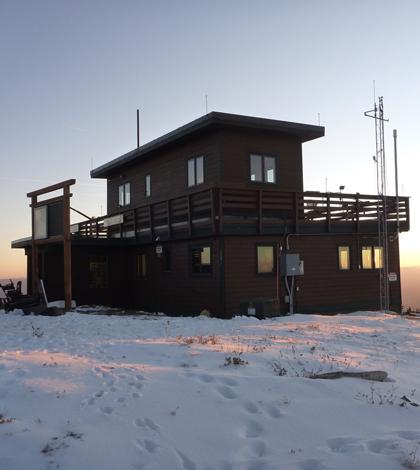 Perched on Mount Werner in the Park Range of the Rocky Mountains, the Storm Peak Laboratory near Steamboat Springs, Colo., is accessible to scientists in the winter a via a gondola trip and two ski lifts, with stints on skis in between.

Those who have heavy equipment to haul or don’t ski rely on snowmobiles or a snowcat. In the summer, it takes a ride up a rough Forest Service road in a high-clearance, four-wheel-drive vehicle.

Though the lab’s remote, mountain-top location can make getting there a task, it’s also part of what makes it “one the world’s premier high-elevation atmospheric science laboratories,” according to Gannet Hallar, Storm Peak’s director since 2006.

“It really allows us, we always say, to have our head in the clouds,” she said.

She means that literally. At 10,500 feet above sea level, the laboratory is inside of a cloud 35 percent of the time during the winter. That’s crucial to the mission of the lab, which hosts research on particulate matter in the atmosphere, the formation of clouds and how the former effects the latter.

Operated by the Desert Research Institute, Storm Peak is unique world-wide for the breadth of monitoring equipment it houses and its accommodations for students and researchers, Gannet said. The lab has beds for up to nine scientists on extended stays to take advantage of its aerosol and cloud physics instruments.

Aerosol research is important because atmospheric particulate matter presents some of the greatest uncertainty when it comes to modeling and predicting future climate change. One dimension of that uncertainty is how aerosols interact with light in the atmosphere, Gannet said. While it’s understood that dark particles absorb light and heat the atmosphere while white particles reflect and cool it, data from the lab will quantify that effect to integrate it into climate models. Storm Peak scientists are also researching the role aerosols play in cloud formation. Water in the atmosphere needs an aerosol particle to condense around to form a cloud droplet Gannet said.

“If you have more particles, you’ll end up spreading that water amongst more particles, forming more, but smaller, cloud drops,” she said. “That makes for more reflective clouds. ”

The lab investigates these and other issues with a lineup of monitoring equipment includes an array of roof- and tower-mounted sensors measuring standard climatic variables like temperature, humidity, wind speed and direction, and solar radiation.

But among the instruments that set the lab apart are the imaging probes, or “cloud probes.” The probes capture image of every single snowflake that passes through it, measuring their size, shape and number. The probes normally rely on airplanes to carry them through clouds, but the lab’s spot in the sky allows them to run theirs on the roof.

“Storm Peak lab was the first place that ever did this on the ground,” Gannet said. “In an airplane, you can cover a lot of distance, but you move through clouds very quickly. So we end up collecting larger quantity of data about clouds because we stay in one place for a long time.” A look inside the lab (Credit: Storm Peak Laboratory)

Perhaps among the most important additions to the facilities came in 2009 when the lab gained running water, septic system and flushing toilets. Before that, tenants relied on incineration toilets that process waste by burning it up. Gannet, who spends many nights at the lab, said the upgrade was “life-changing.”

“And also science-changing,” she said. “There was a lot of concern that those combustion toilets were actually contaminating our samples.”