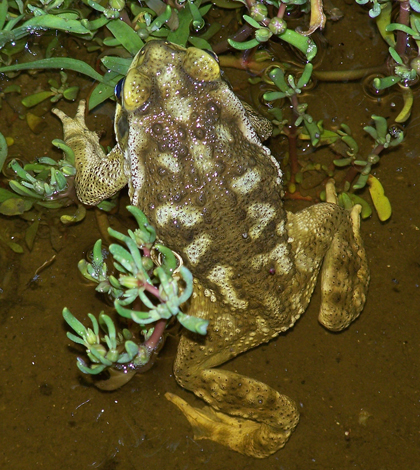 For some time, scientists around the world have been concerned with declines in amphibian populations. These are owed to a number of factors, including spread of disease, loss of habitat, pollution and encroaching invasive species that have thinned amphibian stocks.

Many studies have taken place or are underway to better understand the issues amphibians face, as well as their responses to environmental stressors. One such investigation led by researchers at the Institute of Environmental Sciences & Health in Buenos Aires, Argentina, has evaluated the effects of aluminum toxicity on frog embryos, something largely influenced by the pH of the water that the embryos live in.

Using a species of toad easily found in Argentina, Rhinella arenarum, researchers put to the test a hypothesis holding that the embryos, as a population, might be able to adjust the pH of the waters surrounding them to create conditions ideal for survival. The results of the work have been nothing short of surprising, as scientists found that the frog embryos were indeed able to change pH levels to fit their needs.

“Our point was: Could living organisms in front of adverse conditions try to modify the environment for their benefit? That is, complement the actions to limit or avoid internal damages with actions to limit the hazard from the environment,” said Jorge Herkovits, president and research director of the institute held within Fundacion PROSAMA, in an email.

The idea was that a population of amphibians could work together to tweak conditions for survival. Those embryos most likely to survive would be the individuals most resistant to the adverse conditions, Herkovits says, setting up a survival-of-the-fittest scenario.

Scientists found that aluminum toxicity in the petri dishes is more related to pH than the actual concentration of the metal. And so, to reduce the toxicity of aluminum they experience, the frog embryos have to modify the pH in their surroundings. This sets up an interesting illustration, Herkovits says, showing natural selection and resilience in one experiment. The results may very well have implications for the global problem of ocean acidification, something itself measured in acidity, or pH.

He adds that it’s possible to evaluate toxicity and resilience at the same time using ecotoxicology methods. And charting the creatures’ developmental stages also allows for peering into what environmental conditions there were in ancient times.

“From a global perspective, it (our results) provide support for the GAIA theory, the so-called extended phenotype and a complementary mechanism for the natural selection process within an evolutionary perspective,” said Herkovits. “It is a new vision on how living organisms fight for survival.”

The results were not only observed in frogs, though. Herkovits adds that he has seen similar reactions within fish embryos.

Full results of the study are published in the journal Chemosphere.