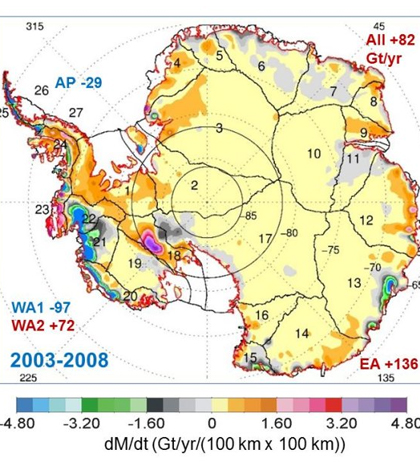 The Antarctic is gaining more ice than it’s losing, according to a recent NASA press release. NASA scientists say that snow buildup from 10,000 years ago is responsible for keeping the Antarctic ice sheet stocked in spite of shrinking glaciers.

Their findings refute current studies that declare the Antarctic ice sheet is disappearing. Recent examination of satellite data dating back from 1979 shows Antarctica procured 112 billion tons of ice during a nine-year period from 1992 to 2001. From 2003 to 2008, ice levels decreased by nearly 30 percent.

They found that prehistoric snow slowly accumulated on the ice sheet, making it thicker — adding nearly an inch each year. Additionally, the Antarctic is decreasing sea level rise. However, this means an unknown source is contributing instead. In order to accurately assess the variation in Antarctic ice, NASA is planning a follow-up mission in 2018.