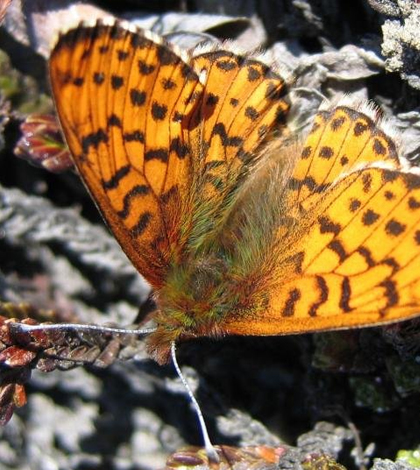 Arctic fritillary is one of two species that have become smaller due to climate change. (Credit: Toke T. Hoye)

Although many scientists have documented changes in species all over the planet due to global warming, not many have turned their attention to changes in butterflies, another species discovered to be sensitive to climate change. But according to a release from Aarhus University, changes in Arctic butterflies have been all too clear: They have become smaller as temperatures have risen.

Aarhus scientists say that global warming causes a decrease in larval size for the Greenland butterflies in the study. The larvae are smaller because the warming climate increases their metabolism, making them use more energy than they are able to store, resulting in smaller body size. The response of warming is not the same in all butterflies, as some have been found to respond to increased warmth by getting larger.

The study was conducted on 4,500 butterflies between 1996 and 2013, one of very few investigations of its kind. The consequences of global warming for these butterflies are especially worrisome since they’re unable to go farther North as their southern range becomes warmer.

Top image: Arctic fritillary is one of two species that have become smaller due to climate change. (Credit: Toke T. Hoye)