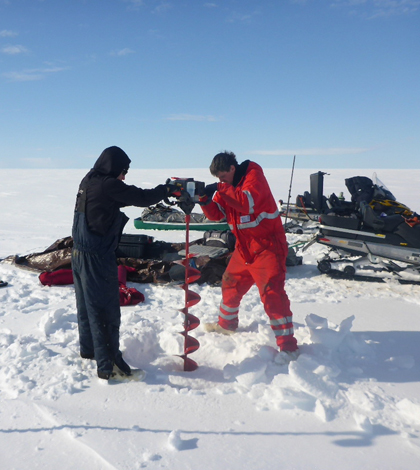 Scientists in the midst of a 900-mile snow machine journey across Alaska’s North Slope occasionally encounter the Great White Yonder, a phenomenon that occurs when the line between the clouds and snowy landscape disappears in the flat light.

“You can’t distinguish the ground from the sky,” said Ben Jones, a research geographer with the U.S. Geological Survey’s Alaska Science Center. “It just makes for a very white world out there.”

Luckily, Jones and his colleagues only spent two or three days throttling headlong into nothingness during a recent three-week traverse across the North Slope. They hauled food, fuel and scientific equipment between Arctic lakes while collecting data and servicing monitoring stations that serve as test bed for a Circum-Arctic Lakes Observatory Network.

In fact, the average temperatures in the teens and relatively little wind made for the best weather he’s experienced since first embarking on some variation on this annual expedition since 2007.

Along their journey, they stopped at around 10 nodes of 6-8 lakes each where they took point measurements of ice thickness, under-ice water chemistry and collected water samples for later analysis in a lab at the University of Cincinnati. They also maintained weather stations and downloaded data from equipment that collect data year-round. The collection of study lakes in Alaska is meant to be a launching-off point for CALON, a globe-circling observation network for part of the planet that appears especially sensitive to climate change. The network will help researchers get a feel for how lakes are responding to various environmental dynamics and change in the Arctic, Jones said.

“It’s still not very well understood, in part just because of a lack of data collection,” he said. “That’s why we go off on these thousand-mile snow machine traverses.”

This year’s expedition had an auspicious start, when the suspension broke on the the first leg out of Toolik Field Station, and what should have been a 6- or 7-hour 110-mile trip ended up taking 13 hours.

“We had to come up with some field-savvy fixes to get the extra 50 miles to Umiat,” Jones said. “Stuff like that happens every year, but it doesn’t usually happen on the first day of the trip.” It was relatively smooth sailing from there. That included a trip to Teshekpuk Lake, the largest Arctic lake in Alaska and the state’s third largest lake overall. Teshekpuk’s size makes it particularly interesting to the scientists because its easily resolved in long-term records of satellite imagery. Based on those records, scientists have documented a trend that shows the lake is losing its ice cover about two weeks earlier than it did in the 1970s and 1980s.

Other than that, there’s little known about Teshekpuk, Jones said. It has never seen a detailed limnological study and observations are sparse.

Along with John Lenters, a senior scientist with water science and technology company Limnotech, the researchers are hoping to bolster understanding about the lake by installing a new data buoy there this summer. The instruments will include a string of temperature sensors that will give scientists real-time data on ice formation on the lake. That data will also be useful for land managers who have to make decisions about when the ground is cold enough and ice thick enough for vehicles associates with oil and gas development to safely travel over the landscape.

The monitoring stations at several lakes include automated cameras that help the researchers keep track of the dates when ice covers or breaks up. Jones is using cameras on one lake to support the Toolik Ice Classic, an outreach effort that asks for guesses of the day when Toolik goes 100 percent ice-free. The winner will get a Toolik Field Station 2014 Ice Classic coffee mug, perfect for warming up with a hot beverage while stuck in the Great White Yonder.