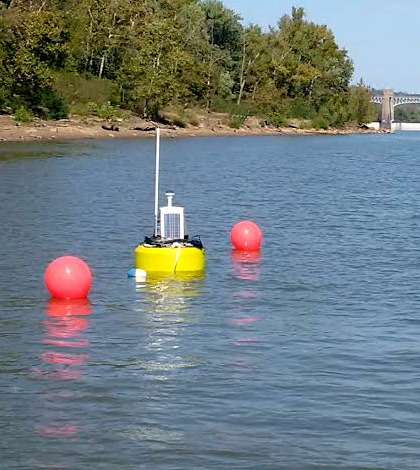 The NexSens CB-450 Data Buoy floats on the Ohio River as it shoots pings to the river floor to gauge its depth. Researchers with the U.S. Army Corps of Engineers use that measurement and other data to ensure dredging doesn't affect the river's wildlife.

A complex series of locks and dams up and down the Ohio River enable interstate commerce, travel and recreation by maintaining a usable pathway for watercraft, but come with the inevitable byproducts of disrupting the river’s natural systems.

To combat this, the U.S. Army Corps of Engineers uses a complex monitoring and response technology designed to minimize the negative impacts of dredging on the river ecosystem.

Steven Foster, a limnologist with the Corps Water Quality Team, works at the Robert C. Byrd Lock and Dam in Gallipolis Ferry, West Virginia. He said one key area he focuses on is the welfare of mussels in the river. River dredging can smother mussel beds, so Foster and the team of engineers monitor the beds to ensure their safety.

“One of the things we do, is we use steering currents by changing the operation of the dams,” he said. “We can direct the currents away from the mussel beds.”

Foster explained that by only opening two of the outermost eight roller gates on the river, the Corps can alter the flow of water to prevent sediment from accumulating on the mussel beds, which can harm the young organisms.

To make sure the currents are flowing properly and not affecting the mussel beds, the Corps uses a NexSens CB-450 Data Buoy, customized by Aridea Solutions that uses a Seatek Ultrasonic Ranging System to ping the river bottom and measure its depth. A shallower depth would indicate sediment build up, and vice versa. The monitoring platform measures the build up every 15 minutes, which the engineers typically check on the hour to make necessary adjustments. And Foster said with the erratic weather and river patterns in 2015, the data played a key role in making the call to cease dredging operations after detecting a buildup of sediment.

For instance, the Corps used to allow dredging in the fall. However, as the engineers gathered data, Foster said they realized the low-flow of the fall season is correlated with the heavy impacts of dredging. Thus, the Corps moved dredging earlier in the summer to run with higher flows, leading to lower impact on the beds.

Foster said at this point, the Corps has a solid hold on how to keep sediment off of mussel beds during the dredging process.

“There’s not much deposition anymore,” he said. “We’ve done it long enough and we know what flows we need to do a dredge operation. It’s a good thing when we don’t see any data. When the sediment platform reads pretty much a zero increase for the whole year, then we know we’ve done good.”

For 2017, Foster said he’s hoping to see another low impact year. So come hell or high water, Foster and his team will be keeping a keen eye on the river bottom, making sure its inhabitants stay safe.