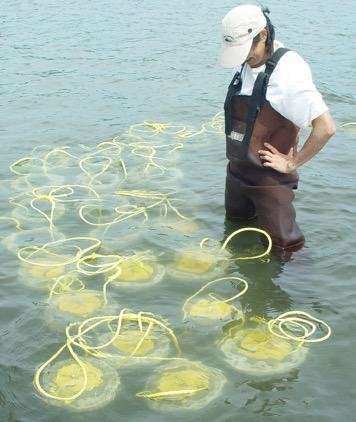 Sailing the seven seas was never without peril, but thanks to shipworms, which are actually a type of clam, it was often downright fatal to sailors. These pests would bore their way through the wooden bodies of ships, rendering them useless in water. Ancient mariners eventually found ways to combat them, though, and by the 18th century the state of the art shield against them was copper-clad wood.

This was no accident; copper doesn’t just keep the soft-bodied clams out of wood. It is also toxic to many forms of marine and insect life. This inherited knowledge was one factor in the modern creation of protective wood coatings like those that guard telephone and power poles against rot.

Kay Ho and Rob Burgess of the Atlantic Ecology Division of the United States Environmental Protection Agency (EPA) have a wealth of knowledge on this arcane subject; they are studying the effects of nano-copper in waterways. Nano-copper has come to replace more toxic forms of copper wood treatments that gained popularity starting in the 18th century.

“You know, if you picture wood you often see in the environment, one side has that greenish color to it?” Burgess prompts. “That’s what the nano-copper that we are describing came in to replace, the CCA [copper chromated arsenate] that was used in most applications alone.”

Ho adds, “It’s good to keep an eye out for that, if you see someone trying to burn wood that looks like that, don’t let them burn that, no matter what they want to try and do. If you burn it, you volatilize a lot of arsenic, and that’s not good for you.”

It is the potential toxicity of copper that is of concern, for this research and any such study. Since nano-copper comes in various sizes, it’s possible that smaller particles are more biologically available—and therefore more toxic. How toxic these nanoparticles would be depends on how bound they are within the matrix of the material they’re in. If something is securely bound, it isn’t bioavailable, and therefore it is neither soluble nor toxic.

“That kind of general toxicity would increase certain enzymes and stop certain proteins from binding up,” Ho explains. “Copper is one of those things that is a necessary element. So a little bit is necessary, but too much is too much. So your body pulls it in, but excess copper will certainly kill you.”

“And it turns out a lot of marine organisms happen to be very sensitive to copper, which is one reason the manufacturers used it as the toxic material in these substances,” Burgess adds. The nature of the copper is only part of the equation, however.

“A lot will depend on the ecology of the organism. Things like filter feeders are more likely susceptible to the particle part of the copper because they get stuck in their gills and their eating apparatus,” Ho clarifies. “On the other hand, an organism that’s a predator that would eat the prey and the copper would stay more in their intestine. And whether or not that particle crosses that intestinal epithelia, that’s another barrier in the way.”

Delving into Nanomaterials with a Two-pronged Approach

The Atlantic Ecology Division, located in Narragansett, Rhode Island, is part of the EPA’s nanomaterials research program. The program brings together scientists from various divisions to parse out how nanomaterials are interacting in our environment.

“A recent focus of what we’ve been doing is looking at nanomaterials that are actually in products, as opposed to the virgin material,” Ho explains. “So it’s really kind of a practical applied research program. This formulation of copper can be found in wood on the market, so that’s how we got into looking at it.”

Ho, Burgess, and their team sought an approach that would combine lab and in field techniques so they could maximize their control of variables while providing them with the most accurate results. Given the toxic chemicals under study, and the potential to contaminate adjacent sites, this was the best possible strategy.

“Field studies are notoriously hard to control,” Ho explains. “You can set up the best field study in the world, and then someone will just drive a boat right through your site, and you get all that mixing, and that really doesn’t help you figure out what’s going on. On the other hand in the lab, conditions are really controlled, but it is really impossible to mimic the interactions between the tens of organisms or the hundreds of organisms that are potentially out there in a field site. I think that as the science and the testing become more sophisticated, people will try and use more of these hybrid field/lab approaches.”

In the context of the current literature and state of the science, Ho and her team see this as a kind of cautious start to a fascinating area of research.

“The current literature is kind of mixed, with some studies saying that nanoparticles are probably more toxic, and some saying they’re not as toxic, or just as toxic as soluble copper. The implications, and what we should take away from this work, are that there is still more work to be done out there,” Ho explains. “There are a lot of wonderful new materials out there that have great potential, but we need to make sure that we understand how they interact in our natural world so that we avoid any unintended consequences. The science to do both of those things, to both create those really great nanomaterials and understand what they’re doing out there in the natural world, they’re both growing and changing on both sides, and it’s really not a static situation. As new materials come out, we come up with these methods to use materials, so it’s a constantly changing, exciting equation.” New Developments, Thanks to Genomics

One of the more fascinating aspects of this research isn’t really mentioned in the paper at all, as Ho and Burgess revealed.

“In addition to looking at the meiofauna and macrofauna visually, we actually also took a small sample of sediments, like a few grams, and we extracted the DNA from that, and then we sent it to our colleagues in Australia,” Ho described. “And they used that DNA to actually determine what kind of meiobenthos were present in that sediment. So it’s kind of a new, sophisticated way of using DNA. When you have to visually count the meiobenthos and macrobenthos, it takes a long time. So theoretically, as our methods of extracting, sequencing, and assembling DNA to determine which organism it’s from get faster, the ability to assess these communities will also become faster and more accurate.”

This technique has the potential to improve sensitivity in testing and get closer to field site results in studies like the one Ho and Burgess just conducted.

“If we looked at RNA instead of DNA we wouldn’t have that much of a difference I think between our field controls and our lab controls. The difference between the field controls and the lab controls is that we apply the layers of sediment, there’s a lot of smothering that goes on, and with DNA you need to use two layers,” Ho elaborates. “That second layer ensures that any living organism comes up. You can’t distinguish between dead DNA and live DNA. However, with RNA, you’d only get the RNA if that organism was living. So we would be able to use fewer sediment layers, and that would decrease smothering, and, by extension, the differences between field and lab controls, and we could get a little closer to the field.”

In the realm of nanomaterials, things change at lightning speed. New nanomaterials that can do things that are no less than astounding are revealed frequently, and there seems to be no limit to what they can do, particularly considering the potential they have as composites. However, at this point the materials science is progressing far faster than our knowledge of the environmental effects is expanding.

Still, this knowledge does not dampen the enthusiasm these researchers have for both nanoscience and understanding the effects of new materials in the natural world.