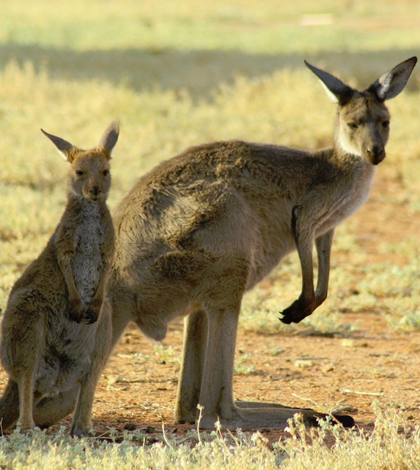 Researchers have found that kangaroos produce methane as part of their digestive process. (Credit: A. Munn / University of Wollongong)

Yes, kangaroos do fart, a new study from the University of Wollongong reveals, according to LiveScience. Since the 1970s, a popular misconception was that kangaroos don’t pass gas, or that the gas they passed had low methane levels. Methane, found in herbivores’ intestines, helps the animals digest grass and leaves. As a greenhouse gas, it traps several times more heat than carbon dioxide.

In the study, 10 kangaroos were placed in separate rooms and fed. Australian scientists then measured the types of gas produced. They also analyzed the animals’ feces to determine the number of nutrients left behind and varied the amounts of food.

The kangaroos produced as much methane as other animals their size. Although the kangaroos may not have special intestinal bacteria, scientists say their bacteria may operate differently.

Scientists say being able to understand the methane processes is important for allaying climate change effects.

Top image: Researchers have found that kangaroos produce methane as part of their digestive process. (Credit: A. Munn / University of Wollongong)