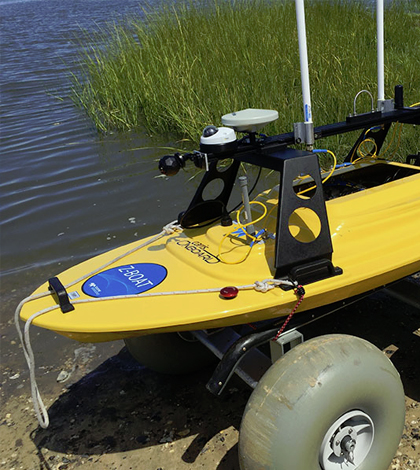 The Teledyne Oceanscience Z-Boat is an autonomous surface vehicle that uses sonar and radio communication to survey. (Credit: University of Delaware)

With tropical storms starting to rev up in the Atlantic Ocean, the timing of the University of Delaware’s Autonomous Systems Bootcamp was perfect for capturing some useful data in August 2016.

The effort aimed to develop a detailed, baseline profile of a nearly 2-square-mile area of Delaware Bay’s Broadkill Beach while also providing some training to researchers on using high-tech surveying equipment. Investigators were keen to learn more about the differences between two sections of beach, one of which had just been replenished thanks to a U.S. Army Corps of Engineers dredging program.

The total area of beach hadn’t been surveyed by the National Oceanic and Atmospheric Administration for more than 40 years, and so the Autonomous Systems Bootcamp would fill a key data gap and accomplish a thorough survey that might take months or years to do otherwise.

Capturing such profiles just before major storms is a great plus from a researcher’s perspective because it provides a baseline of data for comparison later. Analysis from there can reveal how the storms affect coastlines and underwater landscapes.

The Autonomous Systems Bootcamp included students and scientists from nine universities, the U.S. Naval Academy and several tech firms. They fanned out in four teams each day to gather images and other data to map the area, including several waterways near the beach. At their disposal were a fleet of robotic devices for surface, underwater and aerial surveys. There were also two research vessels, several kayaks, assorted underwater cameras and sonar sensors. Luis Rodriguez of the U.S. Naval Academy and Tor Inge Loenmo of Norway carry an 85-pound EcoMapper into the water. (Credit: University of Delaware)

For hours each day through the effort, there were drones in the air, autonomous kayaks moving up and down the shoreline and torpedo-like underwater devices measuring conditions about 3 feet from the bottom of the seafloor.

Analysis of the enormous amount of data captured by the teams is underway and a new map and three-dimensional model of the beach are under construction. Scientists say that some collaborations have developed and a manuscript on the effort is also in the works.

But among some preliminary findings, researchers saw that the offshore area immediately adjacent to Broadkill Beach is surprisingly diverse in terms of seafloor texture and shape. They also learned that shallow-water mapping is very challenging but can be meaningfully addressed by autonomous platforms ranging from aerial drones to autonomous kayaks and underwater vehicles.

More than 50 students, professors, researchers and technical experts participated in the event, including some from Australia, China, Norway, Italy, Spain, California and New England. There were marine and environmental scientists, engineers, biologists, geologists, grad students and undergrad students. It was the fifth Autonomous Systems Bootcamp.

Top image: The Teledyne Oceanscience Z-Boat is an autonomous surface vehicle that uses sonar and radio communication to survey. (Credit: University of Delaware)