Bacterium Breaks Down Ammonium in Sewage and Runoff Without Oxygen 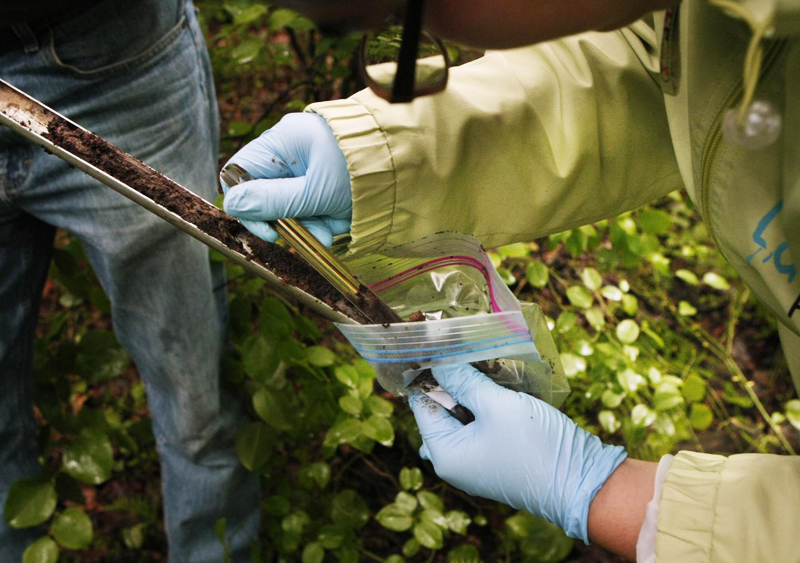 Wetlands are one of nature’s plans for treating water. Home to a host of different microbes, riparian wetland soils play matchmaker to nutrient-rich runoff and bacteria that feast on nutrients and other environmental toxins.

Princeton University researchers have discovered one such bacterium—Acidimicrobiaceae bacterium A6—that can break down ammonium, part of both fertilizer and sewage runoff, without oxygen. This ability could mean wastewater treatment without expensive aeration machinery. Peter Jaffé, Princeton’s William L. Knapp ’47 Professor of Civil Engineering and a professor at Princeton’s Andlinger Center for Energy and the Environment, corresponded with EM about the latest research.

“We first reported of the existence of this bacterium at the same location, Assumpink Wildlife Management Area, NJ,” explains Dr. Jaffé, recalling the research steps that led to the current discovery. “We proposed then that it plays a role in the oxidation of ammonium under iron-reducing conditions (Feammox). We then showed that this Feammox process occurs at many locations where soils have high iron content and are acidic and that this bacterium is present in these soils, providing further evidence that it is linked to the Feammox process. Having now isolated this bacterium, we could show that it can oxidize ammonium and reduce iron when it exists in a pure culture.”

The bacterium is called Acidimicrobiaceae bacterium A6, in part because of its function, and part due to observations during the characterization process.

“It is an Actinobacteria,” details Dr. Jaffé. “When we initially did denaturing gradient gel electrophoresis (DGGE) to separate DNA fragments from incubations of sediments at the Assumpink site, we noted that band A6 (our labeling) became stronger with time after adding ferrihydrite and ammonium. Hence the name A6.”

Oxygen-dependent wastewater treatment methods are more costly than those that can function without oxygen. Providing oxygen to a waste treatment plant requires aeration, which is energy intensive.

“Anaerobic treatment is of interest because it can be achieved without much energy input and in many cases with some net energy production,” Dr. Jaffé describes. “For example, a process called Anammox requires partial oxidation (nitritation) of ammonium to nitrite, and then anammox bacteria can use nitrite to oxidize ammonium under anaerobic conditions. It still needs some aeration for the nitritation. The Feammox process can in principle be implemented without any aeration, although there are major challenges remaining to do so in a reactor given the required supply of iron oxides.” 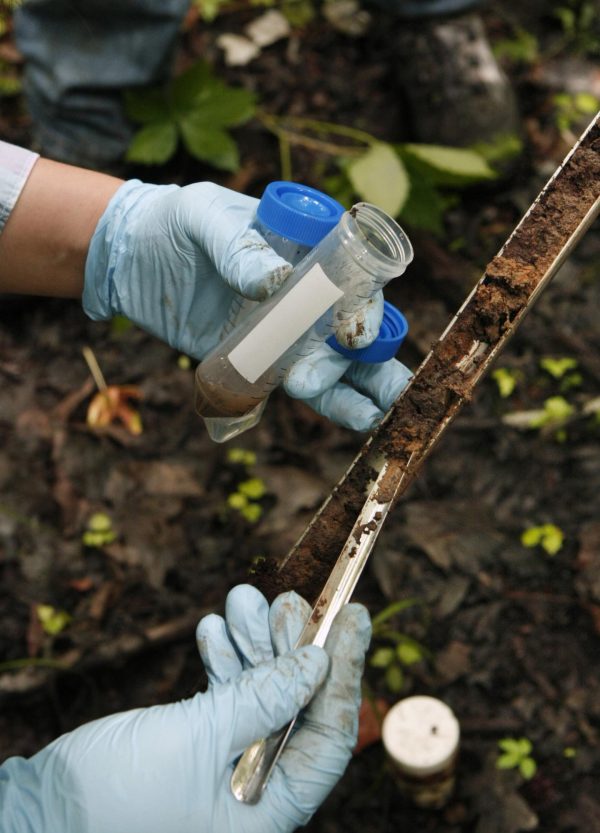 A6’s anaerobic process might also mean more efficient treatment of ammonium and other environmental pollutants in underground aquifers and other oxygen-poor areas.

The idea of treating sewage with bacteria to remove ammonium isn’t new. Most sewer plants that discharge into rivers or oceans already use bacteria this way, but they must feed the bacteria oxygen for the process to work, which means churning lots of air into the sludge. The bacteria consume oxygen as they turn ammonium into nitrite, and other bacteria later convert the nitrite into harmless nitrogen gas. However, too much ammonium in waterways can cause eutrophication as the oxygen is consumed.

The anaerobic Feammox reaction takes place in wetlands, in areas with iron-rich soil. However, researchers weren’t sure what made the reaction happen.

“We first noticed that ammonium was being oxidized in soils that were under iron-reducing conditions conducting fieldwork at Assumpink in 2005,” remarks Dr. Jaffé. “The goal of that research was to study the effect of nitrogen runoff from agricultural areas to riparian wetlands.”

The team conducted a follow-up study, and in 2012, researchers from Berkeley reported that they found ammonium oxidation under iron reduction in rain forest soils in Puerto Rico. Until that point, no one else had reported this reaction, except a researcher in Japan who noticed ammonium oxidation under iron reduction in a reactor (Sawayama, 2006), and called the process Feammox.

“At that point, we had evidence that our observations at Assumpink were not an isolated finding, so we made an effort to understand the process better,” states Dr. Jaffé. “This is a novel pathway in the nitrogen (N) cycle and both applications for water treatment as well as understanding how it affects N cycling in nature is ingesting with many potential applications.”

Isolating the bacterium and confirming the role it plays took years of additional work. The team collected soil samples from the wetland in New Jersey, mixed the samples with water, and added ammonium and iron oxide to the vials. The samples then incubated for almost a year. All of the mixing took place in an oxygen-free chamber, and the vials were airtight to recreate the anaerobic conditions of the wetland soil.

During the year of incubation, the team removed a small sample from each vial about every two weeks to assess whether the ammonium and iron oxide was being degraded. They identified a sample in which this reaction was happening, and sequenced the genetic code of the bacterial species in that sample. It was this last step that revealed that A6 was carrying out the Feammox reaction.

“We noticed that Acidimicrobiaceae bacterium A6 was always present in samples where we observed Feammox, although we could not tell if it played an important role or if it was responsible for the process until we could isolate it,” clarifies Dr. Jaffé.

The team thinks that A6 can break down ammonium, trichloroethylene and tetrachloroethylene—and possibly other compounds.

“Acidimicrobiaceae bacterium A6 gets its energy to make a living by oxidizing ammonium, we believe, but still much work remains to fully understand the process that other compounds are degraded cometabolically,” remarks Dr. Jaffé. “So far we have seen that concentrations of benzene and phenanthrene also decreased during Feammox incubations.” 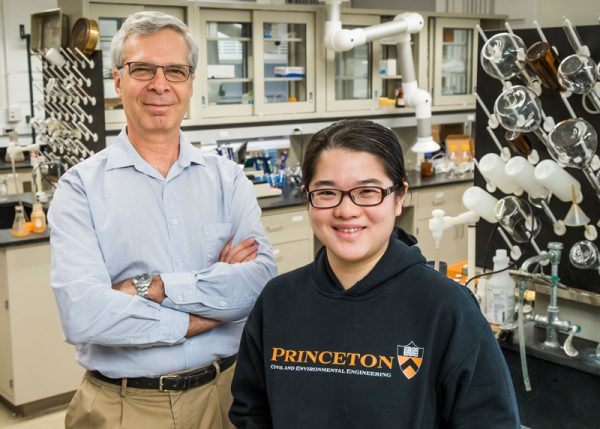 Jaffé and Huang in the lab. (Credit: Frank Wojciechowski for Princeton University, https://engineering.princeton.edu/news/2018/04/11/swamp-microbe-has-pollution-munching-power)

Interestingly, the team has also observed that, like other heterotrophic iron reducers, the organism can reduce hexavalent uranium [U(VI)], which is water soluble, to U(IV) which is insoluble, in addition to ferric iron.

“We could also reduce Cu2+ to Cu+, which is interesting but does not have many obvious applications, but there might be other trace metals, metalloids, etc. that we can reduce,” adds Dr. Jaffé. “Right now we are testing selenium and the results are encouraging.”

Now the team is working to build an industrial-scale reactor that uses A6 to process ammonium. To lower the cost of operation posed by iron consumption, the researchers are experimenting with electrodes, trying to create a small electrical potential between electrodes in the liquid “microbial electrolysis cell” of the reactor. This strategy, if successful, would replace the iron needed by the Feammox reaction.

“When ammonium is oxidized under iron reduction, ammonium is the electron donor and the iron oxide takes the electron and iron is reduced to ferrous iron [Fe(II)],” explains Dr. Jaffé. “Many heterotrophic iron reducing bacteria can transfer the electron from organic carbon to an anode instead of iron oxide. We have shown that Acidimicrobiaceae bacterium A6 can do that too. Hence, it might be possible to grow A6 and oxidize ammonium in a microbial electrolysis cell in the absence of iron. Much work remains to see how to do that with a vigorous growth of Acidimicrobiaceae bacterium A6, and then scaling electrolysis cells is a challenge too.”

The team from Princeton is collaborating with the environmental ministry of China to develop a prototype reactor for treating wastewater for ammonium and heavy metals. This line of research might also reveal solutions for eutrophication problems.

“We are working towards [building the reactor], but I really do not have a date,” Dr. Jaffé says. “Much depends, as always in these cases, on funding. We still need to answer some fundamental questions on the growth characteristics of Acidimicrobiaceae bacterium A6 in pure and mixed cultures.”

While Acidimicrobiaceae bacterium A6’s iron requirement might make it tough to apply this work for use in existing treatment systems, the work may yet find applications in treating natural systems such as contaminated aquifers or wetlands.

“We have built small-scale constructed wetlands and operated them in a greenhouse under conditions that facilitate Feammox,” Dr. Jaffé describes. “We have shown that we can substantially increase ammonium removal in such wetlands. The advantage of wetlands is that iron cycles naturally, it is reduced but then reoxidized on root surfaces. Hence, even though right now it is challenging to build a Feammox reactor, building a wetland for ammonium removal via Feammox might be an interesting application.”

The work also holds promise for rebalancing the nitrogen cycle—an important issue that is not often discussed.

“Although we talk more about the carbon cycle, which has, of course, incredible implications on climate, the N cycle is more out of balance than the C cycle,” adds Dr. Jaffé. “In many locations, way too much ammonium from agricultural and livestock operations is entering waterways. This is a major problem in China, for example. Hence, finding a new pathway within the N cycle responsible for ammonium oxidation is exciting—as are possible applications for ammonium removal.”