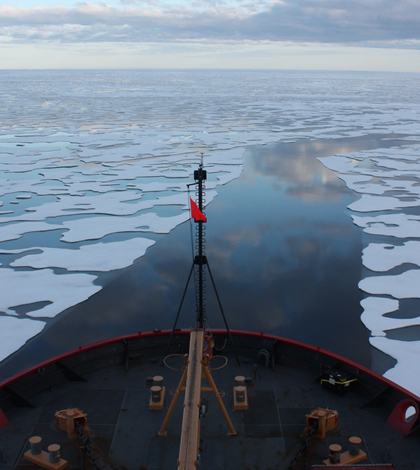 The Arctic has become the target of some ironic attention lately. While part of the international community eyes the region as a climate change indicator, many other entities have set their gaze on the oil and gas reserves that could fuel such change. Now a collaboration between federal and private sector organizations, as well as U.S. and Canadian scientists, seeks to uncover the workings of the Arctic Beaufort Sea ecosystem so that its potential for human use is understood alongside the requirements for its protection.

Being the federal agency responsible for offshore energy development, the Bureau of Ocean Energy Management is leading the Marine Arctic Ecosystem Study with help from the other nine members of the National Oceanographic Partnership Program. While the need for a broader general understanding of the Beaufort Sea ecosystem is shared by all the NOPP partners, each contributes according to its own unique set of information needs.

In addition to energy development and climate change concerns, “decreased sea ice, potential for increased commercial shipping and national security issues are also driving interest in the Arctic,” said Marjoie Weisskohl, public affairs specialist at BOEM. An independent board of international scientists will help “steer and peer review the project.”

The MARES project will examine the various physical, chemical, biological and social mechanisms at work in and around the Beaufort Sea. A plume of freshwater discharge from the Mackenzie River is the subject of particular interest for several of the partners, as its intense mixing with marine waters is believed to have a significant impact on the Beaufort Sea shelf. Weisskohl said that the researchers will use “high-resolution in-situ and satellite observations” along with modeling data to study the plume.

Six satellite systems from the U.S. Air Force, NASA, the Canadian Space Agency and the European Space Agency will provide plenty of useful information for the study. A network of sensors will measure salinity, chlorophyll, pH level and currents to answer questions about the Mackenzie River plume, as well as the changes that occur when the Beaufort Sea ecosystem is covered in ice between October and July. “Working in the Arctic is very challenging,” Weisskohl said. “Ocean and atmospheric conditions, including sea ice, winds and storms can all affect the work. The remoteness of Arctic research requires that ships must be fully equipped and able to respond to any situation.” However, she noted that study members were selected for their experience working in these sorts of challenging conditions.

“We expect to gather a huge amount of data and learn as much as we can, and that there will be many uses for the findings,” Wiesskohl said. While BOEM will use these data to inform leasing decisions on the outer continental shelf — and to mitigate damage from potential energy acquisition operations — other partners could leave a different legacy on the region.

“Another agency could establish a new protected area if MARES identified an emerging biological hotspot, or use the data to improve modeling predictions,” Wiesskohl said.

The MARES project is currently underway, and is set to run through 2019.