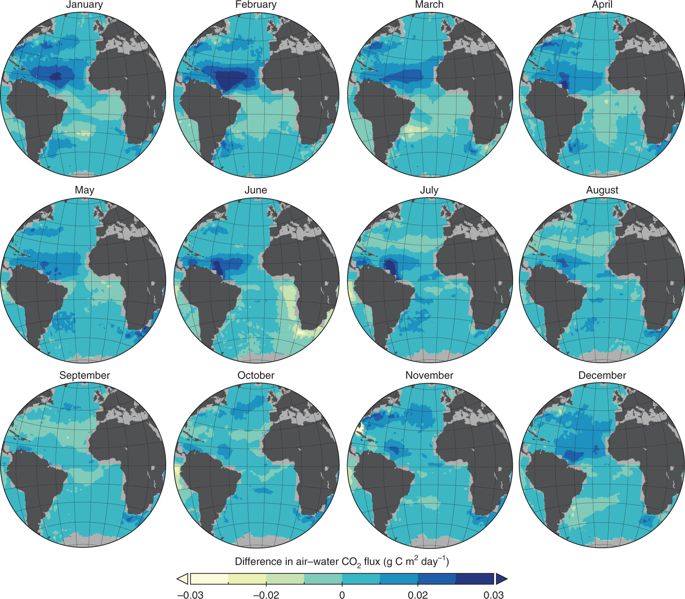 Recent research from scientists in the UK reveals that the rate of CO2 exchange between the Earth’s atmosphere and oceans is reduced by an invisible layer of biological surfactants on the water’s surface. This development will impact scientific forecasts of future climate change conditions.

Around the world, our oceans are hard at work, absorbing about one-quarter of all anthropogenic CO2 emissions. This ability to soak up CO2 from the air makes our oceans the biggest long-term carbon sink on Earth. However, turbulence and wave action affect how quickly the atmosphere-ocean exchange of CO2 happens.

The research team, in this case, set out to determine how biological surfactants, naturally-occurring byproducts from, for example, phytoplankton and zooplankton grazing and excreting, affects this CO2 exchange. To do this, they designed an innovative experimental system to compare the “surfactant effect” measured in real time, at different locations.

“[We determined the surfactant effect] using a gas exchange tank onboard a vessel, and measuring gas exchange using samples of sea water taken at 13 sample stations throughout the Atlantic on the AMT cruise,” explains Dr. Ian Ashton of the University of Exeter’s Renewable Energy team. “This gives direct measurement of the level of gas exchange compared to that expected, the difference is due to surfactants. As such, we get a measure of the reduction in exchange due to surfactants (the suppression factor).”

Combined with satellite observations, this data allowed the team to determine that biological surfactants can reduce the rate of CO2 exchange by up to 50 percent. As sea surface temperatures (SSTs) rise, surfactants do, too. This means that warmer SSTs will come with more surfactants forming an invisible barrier atop the oceans, and a reduction in the rate of gas exchange.

Natural biological surfactants aren’t visible like foam or an oil spill, and it can be difficult to identify them, even using satellites imaging the surface of the ocean. The team needed reliable metrics and technologies suited to their task.

“SST was, in the end, selected partly, as it showed a strong correlation with the measured data, but also as it is an important parameter in production,” adds Dr. Ashton.

Next, the team derived relationships between the transfer velocity and total surfactant activity for Atlantic Ocean surface seawaters. 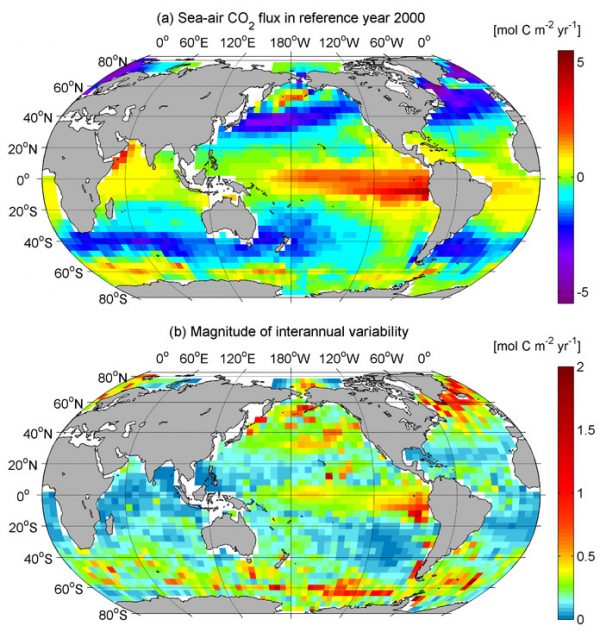 “Using the observed relationship between suppression of exchange and SST from the measured data, we took satellite measurements of SST across the whole Atlantic and estimated the level of suppression,” details Dr. Ashton. “We then used satellite wind data to estimate the transfer velocity and applied the suppression factor to account for surfactants when calculating gas exchange.”

The researchers then developed tools for experimentally determining transfer velocity.

“When estimating transfer velocity, the most common method is to use experimentally observed relationships with the wind speed,” Dr. Ashton describes. “We have developed the FluxEngine—an open source toolbox for calculating gas exchange—that allows the user to directly calculate transfer velocity from gridded data (usually satellite data) using a wide range of previously published methods.”

In this work, the team also used the in situ evaluation of air-sea gas exchange parameterizations from Nightingale (2000), as well as results from others to assess uncertainties in the results.

“Gas transfer also depends on other factors such as wind speeds (transfer velocity), salinity, and temperature (solubility of CO2),” remarks Dr. Ashton. “Predicting how each factor will change in future scenarios and the effect on gas exchange, is trying to predict a number of highly variable systems and how they will interact. However, this work gives us an important step towards understanding one part of the system better in support of that aim.”

According to Dr. Ashton, the team’s next steps will involve developing new methods for determining how naturally-occurring surfactants move, spread geologically, and affect gas exchange.

“Surfactants are likely playing an important role in the global carbon cycle, yet we do not fully understand their impacts and lack a satisfactory method for predicting their geographical spread,” adds Dr. Ashton. “There is a wealth of new satellite data becoming available through new ESA launches and earth observation missions. Projects such as SOCAT are continually improving the CO2 data available. These things make this research possible, so we will attempt to take advantage of these improvements to further define the role of surfactants.”