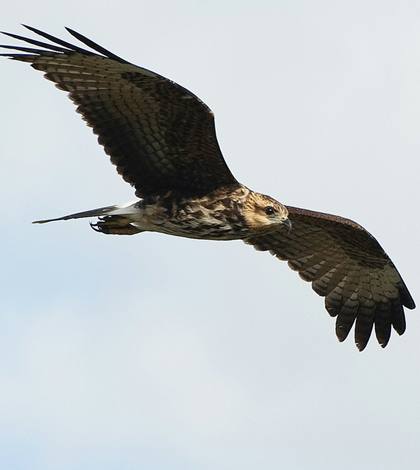 The snail kite is one of many birds found in the Everglades’ stormwater treatment areas. (Credit: Brian Garret/CC BY-ND 2.0)

It didn’t take years of research to see that south Florida’s artificial wetlands were attracting an astounding number of birds. A simple trip to one of those marshes — which are used for stormwater treatment — was enough to recognize that, according to Tyler Beck, snail kite conservation coordinator with the Florida Fish and Wildlife Conservation Commission.

Beck was a graduate student at Florida Atlantic University with aspirations to study wood storks when his adviser showed him just how clearly birds were preferring the artificial wetlands over their natural neighbors.

“We went out there and looked at them and said, man, these are amazing areas,” Beck said. But observation alone doesn’t cut it in academia: “Sometimes something’s really obvious, but still needs to be studied and quantified and published.”

Working with his adviser and colleagues from FAU, Beck developed a study to determine population densities of birds in the stormwater treatment areas. The study, published in the Wilson Journal of Ornithology, found that bird population densities were 38 times higher in the artificial wetlands than in natural marshes.

Designing a method to estimate bird populations was made difficult by the nature of the environment, Beck said. Stormwater treatment areas are laid out in cells, the first of which are chock full of cattails and other thick vegetation to slow the flow of water and absorb excess nutrients from the contaminated runoff. The density of the vegetation in those cells made it near-impossible to count birds using standard line-transect surveys.

On the other hand, the next set of cells feature plenty of submerged vegetation, such as hydrilla. While the open layout of these cells provided great visibility, it also contributed to another set of challenges.

“You can see for a mile and try to count all the birds, but you’d be counting all day,” Beck said, noting that the improved visibility also gave an edge to the less personable birds in the marsh. “In the open areas, there are a lot of ducks that are very skittish,” he said. “They would be long gone before we could even start counting them.” 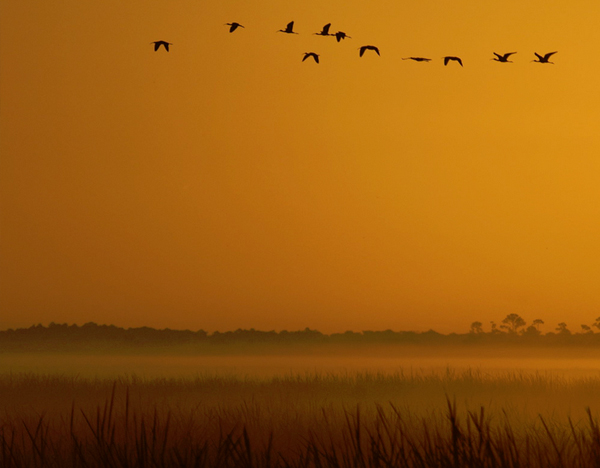 Beck and his colleagues used an airboat to attain better vantage points within the wetlands, and to flush out birds hiding in the thick vegetation. With the greatest bird activity occurring just after sunrise, Beck said he had to rise around three in the morning to allow himself time to get the airboat and haul it to the study area. There, he and his colleagues surveyed bird densities for a couple of hours, while also sampling populations of the birds’ prey fish.

After two years of surveying for two-week periods each season, Beck had enough data to quantify the considerable disparity in bird populations between natural and artificial wetlands. He says that the intentional design of the stormwater treatment areas — particularly in the open-water cells — provides birds with plenty of space and access that might not be available in natural marshes. Furthermore, the submerged vegetation found in those cells are a coveted food source to many birds.

Although Beck’s current job requires him to focus on the snail kite, he says his work still brings him to stormwater treatment areas on a regular basis. He’s hoping to conduct further research to examine the individual drivers of bird productivity in artificial wetlands, but noted that these habitats are favored by many other species as well.

“We saw a lot of bobcats, coyotes, small mammals,” Beck said. “There’s also a number of alligators and turtles and other reptiles. It’s astounding; I’ve seen areas where it looks like you can walk across their backs over the water.”

Overall, Beck said, he hopes his study makes it clear that artificial wetlands are a powerful tool with many benefits to humans and their non-human neighbors.

“These kind of treatment wetlands are really the new thing in water quality improvement,” Beck said. “They’re being used all over the world — they’re also being really well-regarded.”

Top image: The snail kite is one of many birds found in the Everglades’ stormwater treatment areas. (Credit: Brian Garrett/CC BY-ND 2.0)