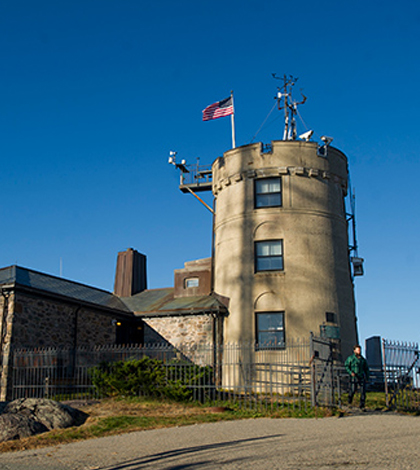 Sitting atop a hill overlooking Boston, in what looks to be part of an old castle, the Blue Hill Observatory and Science Center is home to the United States’ longest-running daily weather record. The stats kept by those at the observatory date all the way back to 1885.

Back then, the station’s founder and source of the funds supporting its construction, Abbott Rotch, worked to keep meticulous data records. They were arguably more extensive than the ones we keep in modern efforts.

“Meteorology was still very much a budding science back then. In some ways, they collected more data than we collect today,” said Brian Fitzgerald, chief observer at the observatory and a master’s student in the School of Education at Boston University. “They had a lot of interest in clouds and looked at the amount and type of clouds each hour. There were studies of different (cloud) velocities using some form of the earliest videography.”

Other than that, Fitzgerald says that they recorded many of the same parameters still recorded daily at the observatory. These include a lot of measurements that would have been seen as important for agricultural back in the 1880s, like temperature, humidity, wind speed, wind direction and visibility.

A lot of those parameters are still tracked using the same sensors that were used in the 1880s, including the oldest sensor on hand at the Blue Hill Observatory, a mercury barometer that Rotch made a special trip to London to buy.

“We use it every day to measure off-station pressure. It’s first measurement was Jan. 1, 1888 and it is still our most accurate and precise barometer, even with more of the modern ones on hand today,” said Fitzgerald. “It’s of very high quality and was hand-made in London.” The oldest mercury barometer at the Blue Hill Observatory and Science Center (second from left) has been in use since Jan. 1, 1888, and is still used to gauge the accuracy of the other barometers. (Credit: Boston University)

Because of its reliable accuracy, the barometer is still used today for measurements and for calibrating the station’s other barometers. It also helps in calibrating other old and long-forgotten measurement devices. Some at the station include an ombroscope, hygrothermograph and sunshine recorder.

The Campbell-Stokes recorder is one of the most beautiful sensors that the Blue Hill Observatory has, Fitzgerald says. Its purpose is to measure sunshine strong enough to cause shadows throughout the day. And though it is certainly a rare instrument, it is still possible to source sunshine recorders.

“It’s essentially a big crystal ball that acts as a magnifying glass when the sun is out and strong enough to produce a shadow. It burns a line into a piece of paper and that line tells us sunshine minutes,” said Fitzgerald. That measurement essentially shows how often the sun is out. Fitzgerald notes that the paper is of special stock and comes specially treated with a flame retardant so that it doesn’t burn too much. And the biggest routine maintenance concern is swapping out the card every day.

But there are some times, especially in Boston, when there is freezing rain. This can complicate measurements of sunlight. “So we’ll bring a hair dryer out to melt the ice and then change the card,” said Fitzgerald.

The ombroscope is meant mostly for measuring the starting and stopping points of precipitation, namely rain and snow. It achieves the recordings by using a chart colored with washable marker that is strapped around a cylinder with a rubber band. The cylinder rotates thanks to a hand-cranking system, which Fitzgerald winds up from time to time.

It is accurate for measuring rain, as you can easily judge splash marks to determine when events started. But it is much more so when it comes to measuring snow. The magnifying-glass-like focus of the Campbell-Stokes sunshine recorder burns into paper to record sunshine minutes per day. (Credit: Boston University)

“It will almost leave a near-perfect snowflake shape,” said Fitzgerald. “Under heavy precipitation, it runs. The main thing is to chart the start and stop point, and it’s great for snowflakes and drizzle.”

The hygrothermograph uses an innovative system that incorporates wavy human hair in a method of measurement. Hairs are strung to measure relative humidity.

“Wavy hair is placed under tension and depending on the humidity in the air, the hair reacts by pulling up,” said Fitzgerald. Instruments like the hygrothermograph have been around since the time that studies of evaporation first began and it is still possible to purchase one today. Companies that make them are likely older than Blue Hill Observatory itself.

Of course those old-timey monitoring devices aren’t the only ones used at the observatory. The station has all the latest and greatest tech out there, including anemometers and other weather-tracking devices. There are also some left behind by the National Weather Service, which operated the observatory for about three decades.

Fitzgerald says that a non-profit organization has since taken over running the station, but that much of the NWS equipment is still running. The sensors set up by the Weather Service are modern, standard measuring equipment and collect data each hour.

“As far as the National Weather Service goes, they can use our climate record for direct comparison with their automated records that run for the past 30 years,” said Fitzgerald. “Our data are also sent to the National Climatic Data Center which in turn uses them for climate modeling and long-running forecasts, things like that.”

Whenever funding is available, Fitzgerald says the data also help to inform in-house research projects like one currently looking at drops in wind speed that the Boston area has seen since the 1980s.

The long-term record is also used in testing new types of meteorological equipment, which the Blue Hill Observatory does on request, because it’s possible to compare a sensor’s performance directly to the dataset. Data are also posted on the observatory’s website for public access.