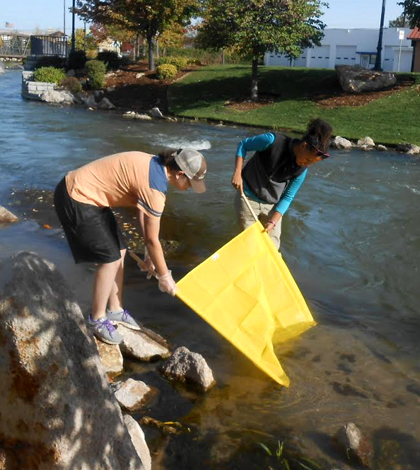 Having just wrapped up its ninth year, the Boise River Watershed Watch program is an increasingly popular citizen science program in Boise, Idaho. It takes interested volunteers and joins them with expert scientists from the U.S. Geological Survey (USGS) who teach them about the river’s health and sampling water quality using transparency tubes, dip nets and chemical test kits.

“Our focus is to educate folks on the parameters that we measure, to give them an idea of the river’s health,” said Tim Merrick, public information officer at the USGS’ Idaho Water Science Center. “So they can collect data on the river’s conditions and get plugged in.”

To help, scientists with the agency give volunteers training upfront on things like how to sample for macroinvertebrates or how to spot certain invasive species that the Boise River is facing. They recently helped participants sampling along 14 sites from the Lucky Peak Reservoir all the way to Parma.

The citizen scientists are looking at parameters like temperature, pH and dissolved oxygen. Others include phosphorus, typically measured through lab analysis, and turbidity levels that are tracked with transparency tubes. Some of those are a little more complex than the rest, but the gear used is meant to keep things easy.

“Because it’s a citizen science effort run by the City of Boise, these are simple test kits that we use,” said Merrick. “Sometimes we bring out gear that we use for sampling, but not this year. We always open up one of our streamgage sites to explain what it’s measuring and why that’s important.” The introduction to one of the USGS’ most basic tools for data collection goes to any mix of volunteers. Depending on the year, they can consist mostly of elementary or high school students, and several adults usually chip in as well.

This year, most of the crew was made up by students from the College of Western Idaho. It’s nice to know that they weren’t awarded any extra class credit for coming. Their attendance was completely up to them, says Cindy Busche, education coordinator with the Boise WaterShed Environmental Education Center.

The students got to get out of the classroom while getting their hands dirty with some scientific methods they’d mostly not seen before.

“We also do a grab sample that’s analyzed by labs nearby, looking at total suspended solids, total phosphorus and E. Coli. We’re also kind of assessing if there are aquatic invasive species,” said Busche. Purple loosestrife and eurasian watermilfoil are a few that volunteers have found. In the downstream reaches, there are New Zealand mudsnails, but there have luckily been no quagga mussels so far. “We get training from the state invasive species coordinator prior to the event. At each site, we also get training from the USGS macroinvertebrate specialist for Idaho.”

Those populations are sampled using dip nets, and both Busche and Merrick agree that the macroinvertebrate activity is the most exciting every year. A large part of that is just because folks often don’t know that there is so much life thriving in a streambed. “They just go out with dip nets and kick up some sediment. It’s always the most popular part of Watershed Watch,” said Merrick. “Volunteers can see all the tiny living things in ice trays, and they love it. And with that, we’re looking at species that are more or less tolerant of pollution like caddisflies and stoneflies.”

“Others really like the pH, when kids can see a color change when they drop a tablet in,” said Busche. “It may be the first exposure to chemistry for some of the kids.”

Amongst the findings that volunteers reported this year contained few surprises for Busche. Temperatures were higher downstream than they were upstream, which makes sense. Phosphorus levels also creeped up.

“That’s the trend or has been the trend for some time. In our valley, how the watershed is laid out, we have snow falling in the mountains that makes for cold streams. And those flow through agricultural and urban areas on the way down,” said Busche. “It’s really picking up heat from urban canals and things from wastewater treatment facilities.”

All of those findings, along with other data gathered in the annual effort, are shared with the public on the Boise River Watershed Watch website. They’re also uploaded to a database overseen by IdaH2O, a citizen-science program overseen by the University of Idaho Extension that provided some funding for the Boise River work. Busche says that some students at the College of Western Idaho have also created an app for the event to share results.

Other entities partnering in the work include the Bureau of Reclamation, Partners for Clean Water, SUEZ Water Idaho, the cities of Meridian and Caldwell, and the Idaho Department of Environmental Quality.