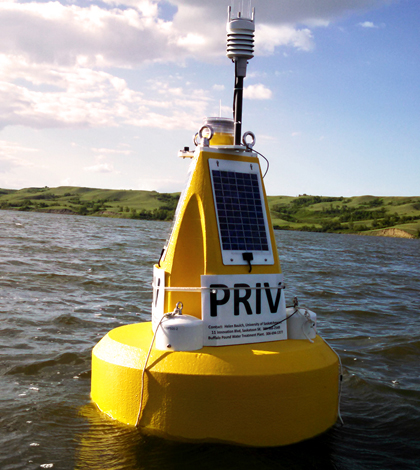 At 22 miles long and just over a mile wide, the slender Buffalo Pound Lake strikes a worm-like figure amid the rolling prairie of southern Saskatchewan.

The lake’s shape and slight depth — an average of just 10 feet — pose a challenge for scientists looking to model changes on this highly engineered reservoir. And the region’s naturally phosphorous-rich soils fuel frequent blue-green algal blooms, which complicate matters for the drinking water treatment plant that draws water from the Buffalo Pound.

Data from a new water quality buoy wrapping up its first field season on the lake should be able to help with both.

Paleolimnological studies and early reports suggest that lakes in the region have produced blooms long before intensive agricultural exacerbated erosion, according to Helen Baulch, an assistant professor at the University of Saskatchewan’s School of Environment and Sustainability. Algal growth isn’t just a problem for Buffalo Pound Lake. Any standing water on the region’s prairies is vulnerable.

“Every year, farmers who have dugouts will have blue-green algal blooms, and you’ll hear about cattle deaths or dogs getting sick,” said Baulch, a lead investigator on the buoy project.

But the issue is magnified on Buffalo Pound Lake, the source of drinking water for roughly a quarter of the province’s population living in Moose Jaw and Regina. The Buffalo Pound Water Treatment Plant’s work keeping that water tasty and above standards gets more difficult during the lake’s algae blooms.

For one, the algae produce the chemical compound geosmin, which can affect the taste and smell of water at extremely low concentrations. Plant workers remove geosmin by running the water through activated carbon, which costs money and takes time.

The blooms are also associated with elevated pH and dissolved gasses which affect treatment processes such as alum applications. The buoy data will give operators a look at chlorophyll, pH, oxygen and carbon dioxide levels in the water a few hours before it hits the plant, giving them a chance fine-tune their procedures and potentially reduce costs.

The buoy, which came out of the lake in October ahead of the ice, also measures water temperature and photosynthetically active radiation to gauge light penetration. A weather sensor mounted above the buoy measures meteorological parameters like wind speed and direction. Those data will be especially useful in sussing out the effects of winds on blooms. When the wind is perpendicular to the lake, which lies in a valley, blooms are more likely, Baulch said. When it’s parallel to the lake, the conditions are too turbulent. Beyond the blooms, the data could help scientists better model Buffalo Pound Lake and other shallow lakes across the prairie. The lakes’ have an unusual wind fetch effect and hold ice cover for up to sixth months a year, neither of which fit well with past modeling strategies.

“We really need to adapt our modeling to try to understand those conditions as well,” Baulch said.

The region’s snowmelt-dominated runoff leads to significant water level fluctuations in most lakes, but Buffalo Pound Lake stays stable because managers have complete control over the reservoir’s major inflow. But change can still happen. Baulch there’s a plan underway to ramp up flows through the lake to support potash mine development downstream. The buoy will help sort out how that affects water chemistry in the reservoir.

On top of all that, the researchers are also interested in learning more about measuring productivity with carbon dioxide sensors versus oxygen sensors. And they’ll work with GLEON, the Global Lakes Ecological Observatory Network, to share their data and try to get at more global-scale questions that you can only answer by comparing responses across different lakes.

“I think there’s a million options for things we can do with the data,” she said.