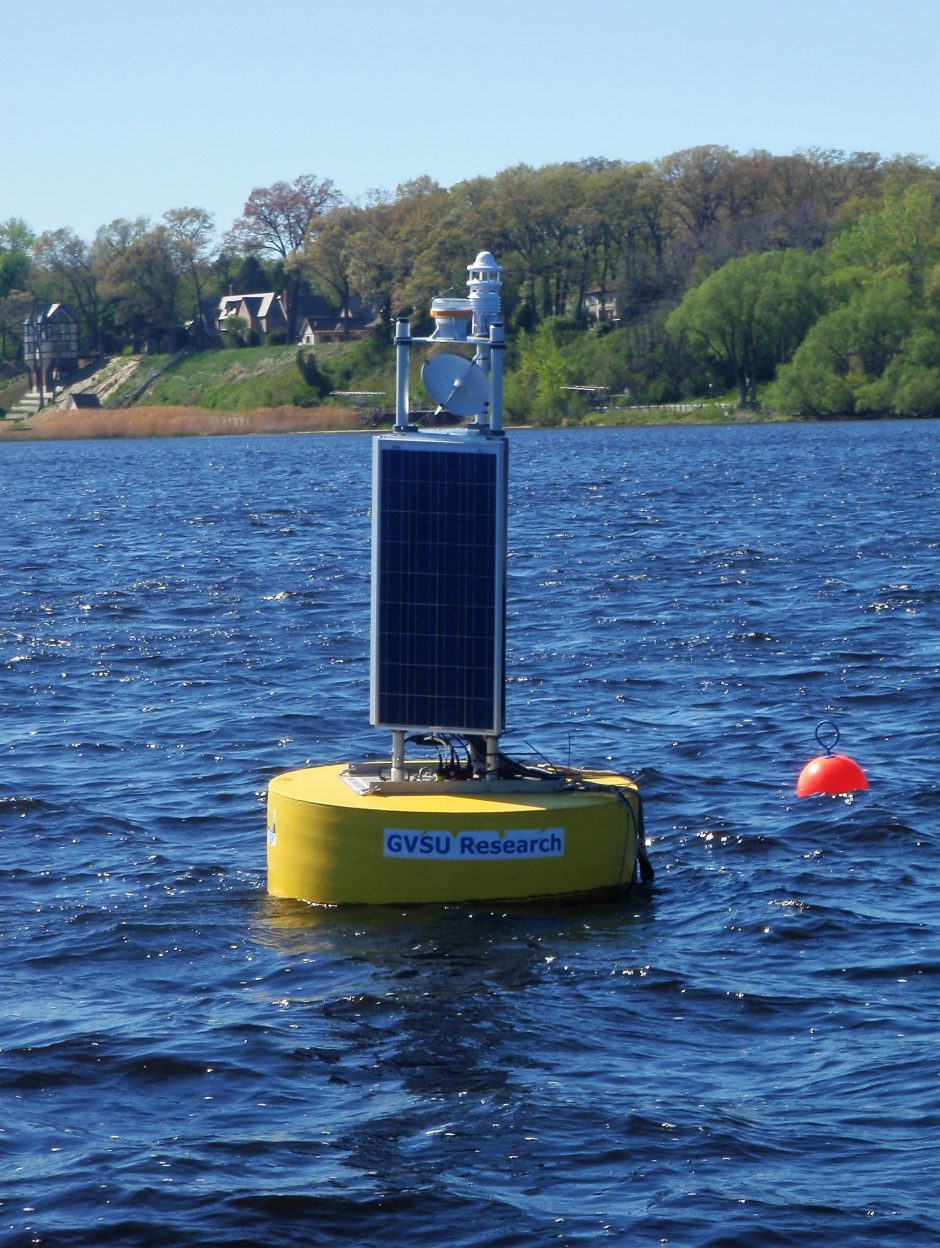 Sixty years ago, the famous ecologist George Evelyn Hutchinson wrote, “A skillful limnologist can possibly learn more about the nature of a lake from a series of oxygen determinations than from any other chemical data.” Since then, oxygen measurements have only grown more relevant as the problem of hypoxia expands in lakes, oceans and estuaries across the globe.

But ecologists’ ability to measure oxygen has grown too. When Hutchison wrote that in 1957,  the “series of oxygen determinations” produced by a data buoy like the one floating on Muskegon Lake in Michigan was unthinkable.

“Every year it takes about a hundred thousand oxygen measurements at four different depths in the water column,” said Bopi Biddanda, professor of water resources at the Annis Water Resources Institute, which operates the Muskegon Lake Observatory buoy.

The buoy has been collecting water quality data since 2011 — data now powering new research that captures with unprecedented clarity the lakewide hypoxia afflicting this Great Lakes estuary every summer and fall. Two recently published studies detail the cycle of oxygen depletion in the lake’s bottom waters, and the ecological impacts from bacteria to fish. Muskegon Lake sits along Michigan’s west coast at the mouth of the Muskegon River, which drains the second-largest watershed in the state. Deeper insights into its hypoxia problems could help restoration efforts on this economically important lake and others like it.

“Really, it’s a model Great Lakes estuary,” Biddanda said. “It’s at the land-water interface and carries with it that entire watershed’s signal.”

One of the studies, published in an April issue of the Journal of Great Lakes Research, combines three years of buoy data with more than a decade of ship-based sampling to show that hypoxia is an annual occurrence in Muskegon Lake. The paper leads off with the Hutchinson quote, a literary move that Biddanda was surprised made it past the journal’s editors.

“We were worried they would want us to take it out, that it was too classy or something,” he said.

But the quote stayed, perhaps because the study goes a long way to prove the utility of time series of high-resolution oxygen data. Long-term manual sampling programs on Muskegon Lake had hinted at this, but the buoy data make it especially clear.

“Up to 2011, there was only anecdotal evidence — an occasional measurement. Some seasonal measurements, some sampling of bottom waters noted low oxygen,” Biddanda said. “But nothing enough to really paint continuous and consistent and irrefutable evidence that hypoxia occurs every year.”

Additional sampling during the study period showed that conditions throughout the lake matched those and the buoy location. The researchers calculated that around 10 to 30 percent of the lake volume is hypoxic for one to three months, which Biddanda called “substantial.”

Another study, this one published in an April issue of the journal Ecosystems, shows how the lack of oxygen in the bottom waters reshapes the ecology of the lake at every level, from bacteria to fish.

The most notable result of the Ecosystems study was the high phosphorus concentrations they found in the hypoxic bottom waters compared with the surface waters, where it was almost undetectable. That’s likely result of a chemical change that occurs under low dissolved oxygen that releases phosphorous previously bound to metals in the sediment, according to lead author and Annis research technician Anthony Weinke

All of that dissolved phosphorus in the bottom water might play an important role in fueling the harmful algal blooms that sometimes plague the lake. There is some evidence that phycocyanin — an indicator of harmful algal blooms — shows an increase following these mixing events. The thought is that algae and cyanobacteria got a boost when strong winds occasionally mix the phosphorus-rich bottom waters into the top layer.

“Kind of like a feeding frenzy for a period after the mixing event to get nutrients that they didn’t already have,” Weinke said.

Higher up the food chain, the researchers found stark evidence of habitat degradation for fish during hypoxia. Muskegon Lake is a productive fishery, and one round of netting at the bottom during peak dissolved oxygen in November found 67 fish of nine different species. But during peak hypoxia, sampling at the same location netted no fish at all.

One peculiar finding showed that during periods of hypoxia the dense, cooler mass of low-oxygen water didn’t always settle to the bottom of the lake as is normally the case. Instead, the hypoxic water was “floating” on a layer of even colder, oxygen-rich water. During such times when coastal upwelling is occurring, cold oxygenated” water from Lake Michigan was occasionally creeping up into the channel and plunging down into Muskegon Lake and slipping along the lake bottom. That pulled more and more cold water in like a conveyor belt, Biddanda said, occasionally reaching as far up as the mouth of the Muskegon River.

The impacts of these intrusions aren’t fully understood, Biddanda said.

“It sounds like a good thing, right? Oh look, this lake in the summer and early fall is experiencing bottom-water hypoxia. And in comes this nice oxygenated cold water,” he said. “But then there’s this floating of the hypoxia exposure to more of the shallow layers which may not have occured before.”

So fish that were swimming up in the water column to avoid the low-oxygen water have to swim up even higher, turning even more of the lake into inaccessible habitat. And sampling during these periods didn’t show any noticeable uptick in fish abundance during the influxes of Lake Michigan water, Weinke said.

“There have been times where I’m talking at seminars and I’ll ask, ‘Has anybody thought, is this guy talking about Lake Erie?’ And most would lift their hands,” Biddanda said.