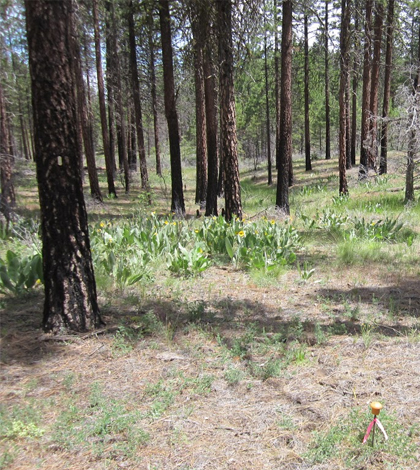 In the western U.S., summertime brings wildfires like spring brings showers to the Midwest. While large conflagrations can damage property and threaten livelihoods, more mild events are a natural means of promoting plant diversity in forests.

Researchers at the University of California, Davis, conducted a study examining 12 wildfires to better understand how fires and other natural disturbances impact diversity, and how forest management in the state can play into that interaction. The study found that plant species typically associated with a southern distribution became more abundant than northern species in forests after a fire.

“Many forests that have a history of frequent fires have not had fire in more than 100 years, and that has dramatically changed the composition of many of these forests,” said Jens Stevens, a postdoctoral scholar with the UC Davis John Muir Institute of the Environment. He is also the lead author on a paper detailing the results of the study, published online in the Journal of Ecology.

When forests go for long stretches without a regular burn, they grow denser and more susceptible to the types of fire that tear through canopies and kill lots of trees, Stevens said in an email. These high-severity fires can occur in any forest system, but they’re becoming more common in fire-suppressed forests, a trend that poses a problem for managers. Fire suppression is most commonly carried out by ridding forests of the thinnest trees, which are most vulnerable to burns.

“There is concern that these forests are not resilient to large, high-severity fires because they are not adapted to regenerate following fires that kills their canopies,” Stevens said. “Because forest fuel treatments are a common management strategy to reduce fire-caused tree mortality in these forests, we were interested in how the combination of treatments and wildfire would affect plant diversity.” From 2010 to 2013, field crews studied 12 wildfires, spending a couple weeks at each location. Personnel from the various national forests in which the sites were located maintained contact with the crews and helped keep them safe in the field, Stevens noted.

“The crews drove these big 12-passenger vans that we rented from UC Davis, and they basically lived out of these vans for weeks at a time, filling them with plant specimens to be used for identification later on when we stumbled upon species we couldn’t identify in the field,” Stevens said. “One year the crew named the white van ‘Vanna White,’ but it was pretty brown by the end of the field season.”

It wasn’t always easy to identify the plants in many of the sites during the first two years of the study. By the time researchers were able to visit the sites in the summer, many of the plants had already dried out, requiring forensic botany in some cases, and earlier site visits in others. But by the end of the fourth year, Stevens said the researchers were able to identify 329 plants at the genus level and 318 at the species level, “which we were very happy with.”

The study found wildfires promote the growth of typically southern plant species by thinning or removing the forest canopy, creating a “sunnier, warmer and drier” habitat on the forest floor — conditions toward which species in the “northern” group are less tolerant. Stevens noted that fire also propagates these species by cracking open the seeds of fire-tolerant shrubs, which are classified among the southern group. The researchers were surprised to find that not only did northern species decrease in the warmer, drier forests, but also diminished in the wetter forests to a comparable degree. Interestingly, they found that the least rainy forest in the study also happened to be the northernmost of the bunch; furthermore, it featured very few typically northern plant species.

“This reinforces that California is very much a ‘floristic crossroads,’ with plant species coming together that may have evolved in very different climates from each other,” Stevens said.

The study’s findings indicate that the paleobotanical record of California’s plant species can inform managers and ecologists today about the potential future of forests in the state. A changing climate that promotes more frequently burned forests could result in a shift from northern temperate plants to more drought-tolerant southern species, Stevens noted. While this shift is likely already occurring, the study suggests that more common or intense disturbances could expedite the process.

“If we want to keep a diversity of plant species in our forests, we should be encouraging a diversity of forest conditions,” Stevens said. “We found that treated forests that subsequently burned in fire had the highest overall plant diversity, and also the most equal balance between northern and southern species.

“This suggests that fuel treatments that promote some variability in how fire burns through them can create a very diverse landscape, but introducing fire into those landscapes after the treatment is implemented is important, because that fire will promote additional plant diversity.”