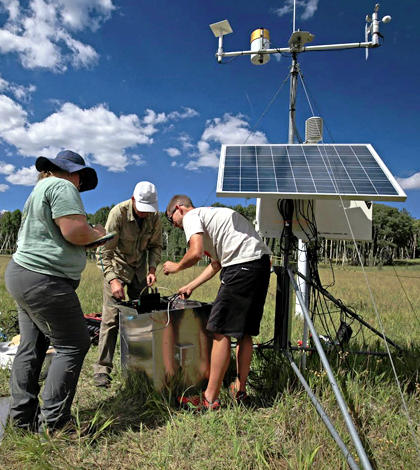 There are lots of nature reserves in the world, including several administered by universities. Of those, the University of California’s Natural Reserve System is the largest.

With 39 sites covering more than 756,000 acres, research underway there hits on every type of major ecosystem in the state. These include coastal tidepools, inland deserts, lush wetlands and the Sierra Nevada mountains, among others.

If you haven’t heard of California’s Natural Reserve System, you’re not alone. Until recently, we had no idea that it even existed, despite the state’s excellent track record with various sensor networks for monitoring wildfires, hydrology and more.

The system was first established 51 years ago by scientists with a vision for protecting some of California’s lands and preserving them for education, outreach and research.

“It started when one of the researchers went back to a site he was working at and found it had been paved over,” said Becca Fenwick, research program director at the Institute for the Study of Ecological and Evolutionary Climate Impacts (ISEECI), housed at the University of California. “He was obviously disturbed by that. I believe there were seven sites in 1965, and the network has been growing since then.”

With nearly 40 sites these days, the Natural Reserve System has expanded into an impressive array boasting pretty much every kind of sensor imaginable. But getting to that size and staying there are two different things.

“Maintaining our sites over a wide variety of ecosystems is tough. One of our weather stations in the eastern mountains, our wiring keeps getting eaten by bears,” said Fenwick. “So things work in the lab, but once you put them outside there are things like bears. Or wasps that decide your camera is the perfect place to put a nest.”

Fenwick says that the most popular sensors deployed across the sites are multi-parameter weather stations. In addition to those, there are sensors for tracking solar radiation, soil temperature, soil moisture and even leaf wetness in some areas. In others, there are fuel moisture sensors that help to gauge the risk of forest fires starting. Fenwick says that the reserve system is looking to expand more into the future, with sights set on building infrastructure to support PhenoCams. The cameras gather images that could help researchers see how ecosystems are changing over time and, from there, with climate change.

“We’re installing additional sensors to complement the weather stations and PhenoCams, measuring air temperature at 10 centimeters, 1 and 3 meters,” said Fenwick, noting that sensors for soil moisture are also being added. She says the developing PhenoCam network will help scientists to better know when trees bloom and later lose their leaves. “The fuel moisture sensor looks very much like a dowel rod you’d get from a hardware store. I believe there’s a wire that runs through it and measures differences in the moisture content of the dowel as it changes, as you’d see on the ground on twigs or in the duff.”

Data from all the new sensors will add more resolution to western regional climate models, she says, which feed into scientific papers and media reports. But sites throughout the Natural Reserve System have already uncovered plenty of interesting insights.

Fenwick can’t comment on specific findings, but has seen a few trends taking shape over time.

“For the last three to four years, there’s been a significant decline to snowpack in the White Mountains and Sierra Nevadas. It’s tied closely to drought,” said Fenwick. “We’re seeing about 60 million mixed pine trees dead up to the 5,000-foot mark in the Sierra Nevada. It’s a combination of the lack of precipitation stressing out the trees and the already existing pine beetles.”

In Colorado and other areas across the West, the native beetles have likewise taken advantage of trees weakened by drought. Conifers that would have normally been able to expel them with excess sap simply don’t have the moisture needed to mount such a charge. And it doesn’t take long for the beetles, which prefer to eat around trees, to gird them enough that they can no longer survive.

Hopes are that the Natural Reserve System can continue to expand and provide more interesting insights in the future. Fenwick notes work currently underway to deploy a new sensor network as part of the University of Northern Arizona’s Southwest Experimental Garden Array.

Data from the whole system will continue to be free and available to those interested.

“If any researcher who’s doing research on our reserves needs info for a particular year, our climate data are freely available,” said Fenwick. “They’re also available to the public as well.”