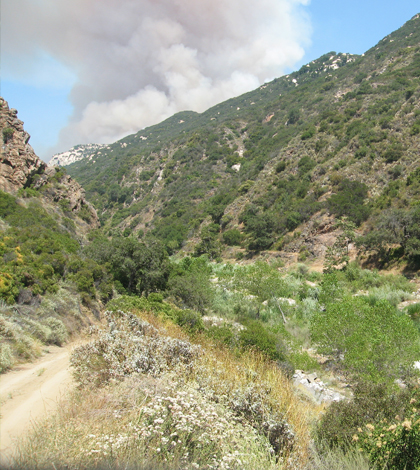 Forest fires aren’t anything to mess with in the U.S. West. They create billions of dollars of damage and are clearly hard to control. But managers in the western states have made strides in recent years in predicting and tracking wildfires. And some of their biggest tools for doing so are camera networks.

One of these is the HPWREN, or High Performance Wireless Research and Education Network, that spans from San Clemente Island in the Pacific Ocean all the way to parts of Arizona. The network predates a newer one, AlertSoCal, that has launched with the help of experts at Scripps Institution of Oceanography.

“We started a project called HPWREN in 2000 to put internet connectivity into the environment, with IP-capable sensors, to get data to who needs it,” said Frank Vernon, research geophysicist at Scripps and lead researcher on the HPWREN network. “We put cameras on HPWREN to track weather but it soon became apparent that wildfire is an important application of the cameras.” Vaisala weather stations are on many of the platforms.

Just complete a web search for an HPWREN YouTube video to see some of the destruction the cameras have captured. Some of the prominent fires that stand out for Vernon include the San Diego firestorms of 2003, 2007 and 2014. Given the extensive damage that those fires and others have wreaked on the West, it’s not hard to prove the worth of camera networks for tracking wildfire spread.

The AlertSoCal network also joins forces with Alert Tahoe, a smaller network of cameras around Lake Tahoe. With its viewpoints, researchers can keep tabs on areas of California and Nevada at the same time.

By taking the three camera networks into account, the coverage that scientists have is quite good for safeguarding the West from fire. Vernon says that AlertSoCal and HPWREN provide a combined viewing area that stretches 200 kilometers north to south and 300 kilometers from east to west. Alert Tahoe will add to that coverage as it is still expanding into the Sierra Nevada Mountains.

Vernon and many others involved with the networks have put in a lot of effort to get them in place and advance their capabilities. Some of the organizations helping include University of California – San Diego, CAL FIRE, University of Nevada – Reno, Nevada Bureau of Land Management, Nevada Seismological Laboratory and numerous county fire authorities.

“We’re trying to provide an ability to see fires as they start and provide information for people to deploy resources in a timely and accurate manner,” said Vernon. “If we can keep these fires small instead of becoming big conflagrations, everyone is better off.”