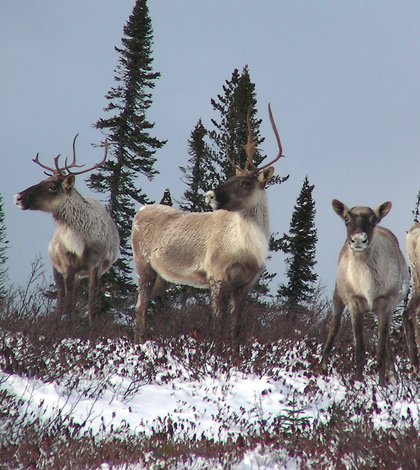 A herd of Caribou near James Bay, Canada (Credit: peupleloup, via Flickr)

The small town of Wekweètì—huddled beside the broad Snare River in Canada’s Northwest Territories, just south of where the boreal forest gives way to wide-open tundra—is not without its modern comforts.

An airport provides the community’s roughly 140 residents, mostly members of the Tlicho First Nation, a link to Yellowknife, the territorial capital about 120 miles south. In midwinter you can get there by ice road. And if you visit in the warmer months, bring your golf clubs—there’s a four-hole course with greens of indoor-outdoor carpet.

Now scientists are using modern satellite technology to better understand why the Tlicho—also called the Dogrib—are at risk of losing what has long been a key food source and cultural touchstone.

As a CBC story in September ominously put it, “The fall caribou hunt for the Tlicho is cancelled this year because there are no caribou to hunt.”

It’s the same story across the circumpolar north. The Bathurst herd, which the Dogrib have long hunted, has fallen from 345,000 animals to about 30,000 in 12 years. Labrador’s provincial government recently announced a hunting ban for the George River herd, which is down to fewer than 20,000 animals from an estimated 775,000 in 1993.

Experts say several factors are likely to blame. Mining, logging and the associated road building encroach on caribou habitat. Hunting puts further strain on the waning herds. Meanwhile, a warming climate may be throwing caribou migrations out of sync with the spring emergence of their food plants, exposing them to dangerous new parasites and creating mosquito swarms so thick they distract the animals from getting enough to eat.

Some scientists think climate change could be harming the herds in another way.

“Caribou search for their food under the snowpack,” said Michael English, a professor at Wilfrid Laurier University in Ontario who is studying changing snow conditions in the arctic and subarctic. “Their food source is basically lichens. Accessing that food source takes a bit of energy. The thinking is that as the climate system is warming slightly, we might see differences in the snowpack structure through time.”

Computer models predict increased snowfall as a result of climate change. More snow could mean the caribou spend more energy trying to reach their food than they get from eating it.

English and colleagues are just over a year into a project to see how snow conditions are changing in the boreal forest and “to try and understand the role snow plays in caribou ecology, but more importantly the role it plays in the reduction in caribou numbers over the last 12 to 15 years,” he said. Satellite data help scientists study the effects of climate change on the snowpack along the caribou migratory routes. (Credit: peupleloup, via Flickr)

The team is collaborating with Dogrib elders who are well-versed in the Bathurst herd’s behavior and biologists who have fitted some of the caribou with satellite collars to track their migrations.

To observe snow conditions, English and colleagues use data from the Special Sensor Microwave Imager, which satellites orbiting Earth have carried since 1987 for the U.S. Department of Defense. The SSMI measures naturally occurring microwave data emitted by the earth. As snow depth increases, it blunts short-wavelength microwaves. So, by measuring the ratio of short- to long-wavelength microwaves received by the SSMI, the researchers can draw conclusions about the snow’s depth and melting on its surface.

The SSMI produces data for 25 square-kilometer “pixels.” English and colleagues also crisscross a two-pixel area on snowmobiles in the winter to take on-the-ground measurements of snow depth and density. That helps them to confirm the SSMI data and update their algorithm, which was developed in another part of the boreal forest and must be fine-tuned for the Wekweètì area.

English said it will likely be another year or so before the team can begin piecing together a meaningful picture of how the Bathurst caribou are responding to changes in the snowpack.

The predicted increase in snowfall so far hasn’t materialized, he said, but other changes associated with a warming climate—such as “ice lenses” that form when the snow’s upper layer melts and then refreezes—add stress to the caribou’s already arduous spring migration to calving grounds some 200 miles north.

English found the snow covered in an ice lens when he arrived near Wekweètì for a research trip last April. Ice and dense snow not only make it harder for caribou to reach their food, but also can scrape their legs and slow them down, leaving them vulnerable to predators.

“We saw some timber wolves out on a lake, and they seemed to have no problem running across the lake without going through,” he said. “It might slow caribou down a bit, but it doesn’t seem to slow the wolves down.”