Choosing The Right Airmar WX Ultrasonic WeatherStation For Your Project 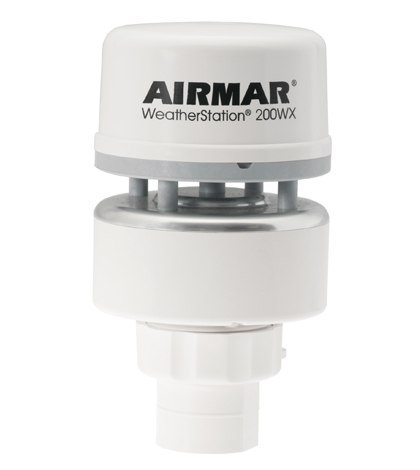 Monitoring the weather isn’t just important for producing forecasts on TV news. It’s key to managing a whole host of other things, like expensive livestock, commercial fishing operations and even in the success of military warfare.

The folks at Airmar Technology Corporation know this firsthand, as weather monitoring products they make have been integral to the good outcomes of many projects over the years. Their current lineup of weather stations is full of high-quality sensors that deliver results, including the 110WX, 150WX and 200WX Ultrasonic WeatherStation Instruments.

These three options all boast the ability to gather basic weather parameters, but are ideally suited for different projects. Since it can sometimes be difficult to sift through the variation between the models, we talked to Stephen Johnson, business development manager at Airmar, who clued us into which type of weather station is best for some of the common applications out there.

The 110WX is essentially the base model in the line, and is most ideally suited for stationary platforms. It measures wind speed and direction, air temperature, barometric pressure and humidity in a compact unit with no moving parts.

Like the other two models, it can be mounted on a standard pole with 1-inch to 14 UNS or ¾-inch NPT threads. It has an IPX6 waterproof rating. But by adding an optional humidity sensing module, this changes to IPX4.

Johnson says that the 110WX allows customers to come at their projects in innovative ways to fulfill the monitoring needs that they have.

So, for example, customers working in agriculture or livestock management can deploy the sensor to keep tabs on changing climatic conditions that affect their crops or large herds of animals. This means they can be coupled with a solar panel and data logger and deployed in the middle of a field. Or the 110WX can also be mounted near the ceiling of a large building containing animals.

For customers looking for a marine monitoring solution, the 110WX is best deployed in a stationary setup near the water body of interest.

“Weather impacts every aspect of operations on marine vessels; from racing and cruising sailboats to yachting and commercial fishing,” said Johnson. “Rapid changes in weather and sea conditions make monitoring of both meteorological and oceanographic parameters a critically important part of ensuring safety, but also maintaining operational efficiency.” Reliable weather monitoring, he says, is important both where you are and where you’re going so that operational decisions are based on real-time, site-specific data rather than intuition.

Some other things to note about the 110WX include that it can output information in RS422 and CAN Bus. Wind data can also be adjusted and unfiltered to make it possible to collect maximum wind gust measurements.

The next step up in the WX line is the 150WX instrument. Instead of being limited to stationary deployments, this weather station is much more versatile. It is also functional in portable, deployable systems, as well as mobile applications on land.

It measures apparent and true wind speed and direction, barometric pressure, air and wind chill temperature, relative humidity (as an option), dew point, heat index and GPS position. In addition, it incorporates a solid-state compass and an accelerometer that measures pitch and roll. The same deployment options apply in its case as for the 110WX and it also has an IPX6 waterproof rating.

With all of those thrown in, Johnson notes its value for first responders in emergency situations.

“Weather monitoring equipment is used to measure weather conditions at and around incident sites; this is particularly important for incidents involving the release of hazardous materials into the atmosphere in or near population centers,” said Johnson. “Knowledge of weather conditions is needed to assess risks, establish exclusion zones, protect downwind areas, position incident command posts and develop plans of action.” The U.S. Coast Guard is one agency that uses the sensor for those purposes. The true wind readings are particularly valuable in that agency’s case because guardsmen can use them in predicting conditions at disaster sites before they ever arrive.

The sensor also adds value in agricultural monitoring applications. For example, weather can influence a host of crop-management decisions, such as when to sow, plant or harvest crops.

“Wind can cause problems with the operation of sprayers. Wind problems consist mainly of ‘wind drift’ away from the site, therefore operators must document the direction of the prevailing wind in the area,” said Johnson. “Spraying would have to cease when the effect of the wind drift (wind speed and direction) would cause spray (fertilizer, weed killer, etc.) to be carried off the intended site.”

The top of the line is the 200WX (this magazine covered it here), featuring functionality for demanding mobile, land-based weather applications. It can be deployed on a standard pole with 1-inch to 14 UNS or ¾-inch NPT threads and has an IPX6 waterproof rating.

It measures apparent and true wind speed and direction, barometric pressure, air and wind chill temperature, relative humidity (as an option), dew point, heat index and GPS position. It also has 3-Axis Solid State Compass, 3-Axis Rate Gyro (gyroscope) for rate of turn and 3-Axis accelerometer that has the best pitch and roll accuracy in its class. Johnson says that customers have used it in a lot of different applications over the years, including on the tops of TV news weather vans and in securing the success of airborne military warfare operations. Both of those need reliable true wind speed and direction data.

For military operations, terrain is often a concern. Johnson adds that the compass is reliably accurate in those sort of situations.

The GPS also provides a general position point, helpful for letting project managers know where stationary or mobile platforms are at any time. This feature is particularly useful for buoy projects or other offshore weather monitoring applications, where conditions can change quickly and complicate operations.

“Having worked with many autonomous vehicle and buoy OEMs (original equipment manufacturers), we have further developed the WeatherStation Model 200WX to become more robust to meet the operational challenges of this extreme, harsh environment,” said Johnson. “We have an IPX7 version of the Model 200WX designed specifically for buoy, USV (unmanned surface vehicle) and other offshore platforms.” This version has low power requirements that help it to perform well in portable battery and solar-powered applications.

But the best feature of the 200WX, Johnson says, is its compactness while still retaining all of its functionality.

“What has always set our product apart from the competition is the integration of multiple sensors in a compact, all-in-one housing at an extremely attractive price point,” said Johnson. “The internal GPS and magnetic compass, complemented with our ultrasonic wind solution provides functionality that is normally only achieved by combining data from at least three separate sensors.”

As for accessories, Johnson points out several optional add-ons that are useful with any station in the line.

One is the NMEA 0183 Data Converter. For WX-Series stations outputting data in RS422, this accessory allows data to be displayed directly on a PC by permitting data transmission through USB protocol. In a similar vein, the Airmar NMEA 2000 USB Gateway does the same with data outputted in NMEA 2000 (CAN Bus) format.

These two data converters are complemented by WeatherCaster, a Microsoft Windows-based software that displays weather and navigational information on any PC. It is included with every WX-Series Ultrasonic WeatherStation.

“By displaying data sent from an NMEA 2000 or NMEA 0183 network over a WiFi adapter connected to the network, OnSiteWX gives you easy access to data at sea or on land on your hand-held mobile device 24 hours a day,” said Johnson.

For users looking to connect the sensor to a data logger or chartplotter, there are NMEA 0183 and NMEA 2000 output cables available. The NMEA 0183 cable terminates in bare wires or Mini-Con-X socket connector, while the NMEA 2000 cable offers the standard 5-pin male plug connector.