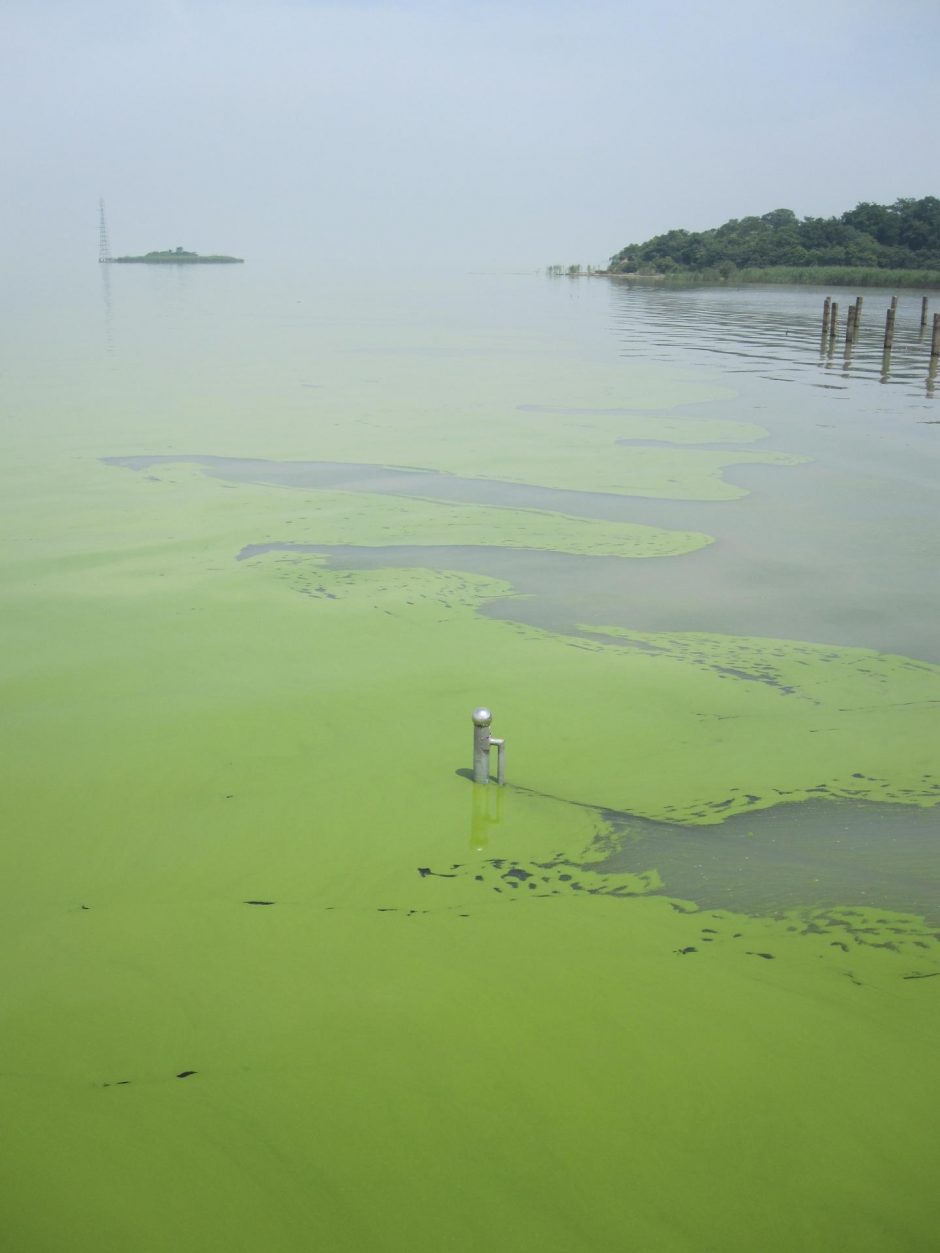 For more than two decades Lake Taihu has been stricken with toxic blue-green algae (cyanobacterium) blooms that have jeopardized the drinking water supply of more than 20 million people. Obviously this did not happen to Lake Mozingo—but it is an example of what algae can do to lakes. (Credit: Desert Research Institute)

Maryville, Missouri is home to Northwest Technical School, Northwest Missouri State University, and the Missouri Academy of Science, Mathematics and Computing as well as nearly 12,000 citizens. The unusually warm winter has allowed a large algal bloom to form in Mozingo Lake, the primary source of drinking water in the area. City and state officials began to deal with the problem in January, and within a month, those efforts were paying off.

Corinne N. Rosania, the Environmental Manager of the Water Section of the Missouri Department of Natural Resources corresponded with EM about the treatment efforts.

“Surface water treatment is a complex process for water treatment operators and must be monitored for daily changes in the raw water quality in order to adjust the treatment process,” Rosania explains. “In Fall 2017, ambient temperature changes caused what is known as ‘lake turnover’ in Mozingo Lake.”

Lake turnover is natural water movement that is seasonal, caused by temperature changes. This turnover causes fluctuations in the thermocline, or water strata, as organics are moved from the bottom of the lake to its surface. Because of that, turnover can often result in noticeable changes in taste and odor. These natural weather-related changes were at the root of the algal bloom issue in Mozingo Lake.

“Various types of algae can produce noticeable taste and odor changes in the water,” details Rosania. “These changes are aesthetically unappealing, but have not resulted in any bacteriological samples that could cause concern for public health.”

To deal with the taste and odor fluctuations, there are a range of processes that water treatment managers try, but it’s a complex process.

“PeopleService operates the City of Maryville’s water treatment plant, and began increasing their application of PAC (powder-activated carbon) which helps adsorb odors and alleviates taste issues; however, the increased use of PAC in the treatment process must be monitored closely so as not to plug the plant’s water filtration membranes, Rosania describes. “In addition, sodium permanganate and chlorine dioxide (oxidizers) were also increased to help alleviate the taste/odor issues; the raw water intake was adjusted based on pH, temperature and other water quality parameters.”

Further contributing to the complexity of the situation were changes with the mains that were initiated in Fall of 2017. On January 8, 2018, the City of Maryville held a public meeting to keep citizens in the loop. There Steve Guthrie of PeopleService presented information to the public on the taste and odor issues at Mozingo Lake, and described the steps the city had taken to address the issue. Guthrie also revealed the details of the planned process moving forward.

“The City of Maryville has engaged with other systems to initiate development of a comprehensive Lake Management Plan,” Rosania explains. “In addition, this city is considering purchasing mixing equipment to keep the lake well-mixed to prevent algal growth in the future. The Lake Management Plan would be a program to monitor their source water quality and conduct microscopic analysis/speciation of algae in an onsite laboratory to help them determine optimal operational adjustments that may be helpful in the future.”

According to the Northwest Missourian News, the mixing equipment being considered is SolarBees, a mechanical “mixing” system. SolarBees are powered by solar energy and pull deeper, colder water from the bottom of a lake and distribute it toward the water’s surface, preventing stratification and the kind of static aquatic environment that can encourage algae growth.

The city’s efforts appear to be working—a welcome result among a tableau of mixed results nationwide.

“A raw lake water sample was analyzed in late December 2017, and at that time, several known taste and odor-causing algae species were present,” Rosania describes. “On January 9, 2018, a MoDNR KCRO Water Specialist conducted an assistance visit at Maryville’s water treatment plant and inspected the raw water with a microscope; based on the few species found, it appeared that the algal bloom had largely dissipated.”

Maryville officials are following up, working to prevent further issues as the mechanical solutions are considered.

“Our Water Specialist suggested that the city continue the following: development of the Lake Management Plan proposal; development of a Source Water Protection Plan; further investigation into proper adjustments to the raw water intake levels to ascertain the best level for water quality for the treatment process; running routine tests for chemical feed adjustment at the plant; and also considering a pilot project for implementing additional treatment techniques at the intake to further treat taste and odors from the raw water,” adds Rosania.

By early February, students interviewed by the Northwest Missourian News reported that the drinking water tastes “the best it’s ever been.” Meanwhile, officials are implementing their plans.

“Each month, the City of Maryville collects 10 routine bacteriological samples for drinking water throughout the distribution system to ensure the water is safe to drink (i.e., total coliform absent) and evaluates disinfectant residuals to ensure they are within protective ranges,” details Rosania. “A review of these routine bacteriological samples, other chemical results, violation history, etc. can be viewed on the MoDNR’s Drinking Water Watch website.”