Clean Energy In Ohio On The Rise 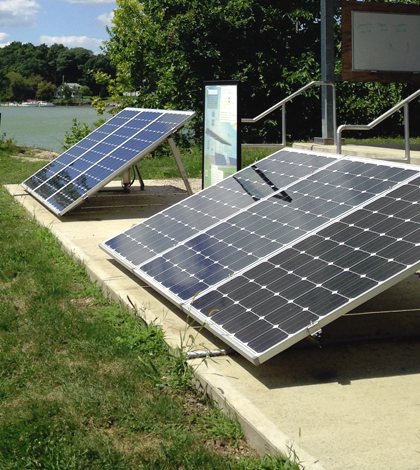 The future for clean energy in Ohio is bright, as trends indicate more wind and solar energy generation is coming online. But the state still has far to go, according to an Ohio State University Extension expert.

Speaking at a recent meeting of Great Lakes reporters hosted by the university’s Stone Laboratory on Lake Erie’s Gibraltar Island, Eric Romich discussed the shifting landscape of renewable energy resources in Ohio. As an extension field specialist, he has seen some of the shift firsthand through projects in which the Extension assists businesses and private entities installing their own green energy infrastructure.

“We’re in the midst of an energy transition,” said Romich, noting how the United States as a whole retired about 18 gigawatts of electricity generation capacity in 2015, 80 percent of which came from coal generators. “And they take decades, it’s not measured in years. But it’s happening.”

Ohio is different from other states that are working to increase clean energy use because it uses annual benchmarks in its renewable portfolio standards, which can vary between goals or mandates depending on the state. Ohio’s present benchmarks require the state to get 12.5 percent of its energy from renewable sources by 2027, of which 0.5 percent has to be from solar.

The state has also been under the effect of legislation enacted by Ohio lawmakers that put in place a three-year freeze for its renewable benchmarks. The freeze is ending soon, but some lawmakers are pushing to extend it with Ohio Senate Bill 320. A study of renewable portfolio standards led by scientists at the Lawrence Berkeley National Lab found that the goals are highly successful in translating to more clean energy use, Romich says. Investigators in that study found that around 95 percent of those in place nationwide are on pace to meet the standards set.

“(Ohio) Senate Bill 10 froze those benchmarks at 2014 levels. And so it’s still remaining to be seen if we’re going to pick those up and move and add those to the end,” said Romich. “There’s also been some discussion about Senate Bill 320, which is having some additional discussion. It’s just been introduced, hasn’t been through the Chamber.”

But despite the recent freeze, it’s easy to see that Ohio has made some strides since its benchmarks were first set in 2008.

“…If we just look at what’s happening in terms of development from a capacity standpoint,” said Romich. “Is there a connection between policy and development? Absolutely.” The figures he presented showed that there are now nearly 540 megawatts of clean energy in Ohio coming from wind. They also showed a recent surge in solar energy generation around the state.

According to the Public Utilities Commission of Ohio, 1.5 percent of the state’s total energy comes from renewable sources as of June 2015. Around 58 percent still comes from coal burning.

“When you talk about energy and energy transitions, it’s going to be driven by a number of things. It’s going to be driven by resource availability, economics, technology and then the Three P’s — policy, politics and public opinion,” said Romich, borrowing a line from Daniel Yergin’s book “The Quest.” “When you look around, there’s not many wind projects. But when you see them, they’re big. Solar is the opposite, they’re all over the place. If you look around when you’re driving, you’ll see them. They’re all over the place, they’re small.”

There were only 38 solar projects in Ohio in 2000, he says. As of July 2016, 2,064 solar projects have been certified with the state’s public utilities commission. Some of the increase has come because of declining costs for installing solar panels. The costs for the photovoltaic cells have gone down, he says, and costs per watt for solar in Ohio are somewhere around $2.50 to $3.50.

For wind, costs are also on their way down, but that’s after surging in the recent past. Nowadays, they are sitting around where they were in 2000, at $171 per watt nationally on average. Much of that is because the wind industry migrated out of the typical “wind belt” regions where wind is plentiful, where it has been more expensive to generate energy from wind but also where installers deal with higher populations that have led to higher lease rates for land, among other things.

As for the future of clean energy in Ohio, Romich says that it’s impossible to guess. As an example, he notes that no one expected the natural gas boom that has taken place in the United States in recent years. But things are looking good for now.