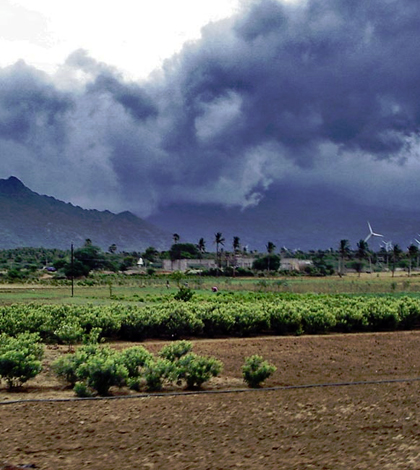 Advancing monsoon clouds and showers in Inda circa 2006. (Credit: PlaneMad via Creative Commons 3.0)

Monsoons are massive air circulations that may or may not contain rain depending on the season. Although it has long been acknowledged that climate change is likely to affect monsoons, influencing rainfall patterns over large swaths of land, researchers had expected that climate change would have to reach a tipping point, after which monsoon activity would be abruptly altered.

In a release from Yale University, scientists say theory and computer models indicated that the response of monsoons to a variety of factors that influence climate change, such as increased aerosol emissions and greenhouse gases, were likely to cause a gradual difference in monsoon behavior rather than a dramatic shift following a tipping point.

Researchers showed that including the phenomenon of adiabatic cooling, wherein air cools when it rises, into monsoon modeling behavior predictions indicated that the monsoons were likely to go through a gradual alteration in response to climate change.

Previous attempts at modeling monsoon behavior did not include adiabatic cooling effects. Year-to-year variations in monsoons are still expected to appear, even if long-term changes occur in monsoon patterns.