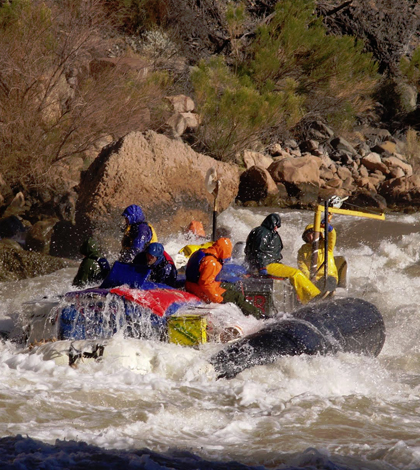 Largely seen as pristine and relatively untouched by human activity thanks to its protected status, the portion of the Colorado River flowing through Grand Canyon National Park is anything but, according to recently published research. This is evidenced by high levels of selenium and mercury found in the fishes there.

Scientists from many institutions were involved in the years-long work, full results of which have been published in the journal Environmental Toxicology and Chemistry.

It was led by the U.S. Geological Survey, but perhaps the contributors from Idaho State University got the best end of the stick. They were looking into the food webs of the river to evaluate concentrations of selenium and mercury gathering in fish. For their part, they covered a portion of the Colorado River that stretched nearly 250 miles, spending weeks at a time camping up and down the banks of the river itself.

“The logistics of working in the Grand Canyon are at once a challenge and a reward. It’s a wonderful place to work as a scientist and is great for recreation,” said Colden Baxter, associate professor of freshwater ecology at Idaho State and study co-author. “But it comes with its own challenges to accommodating research. It was a huge team effort to build food webs in addition to the sampling.”

Baxter says he and others spent weeks at a time studying along the river, and would put in at Lee’s Ferry, just like many of the tourists that go rafting in the Colorado River. But his crew wasn’t just towing life jackets and a day’s lunch. Instead, they brought along tools for scientific research like seine nets, hoop nets or electrofishing gear so that they could gather fish.

They had focus areas along the river that they wanted to zero in on, Baxter says, and would travel between those on each trip down the waterway.

“We were fortunate in many respects. When we tell people about the project, they say, ‘Oh boy, were we lucky,’” said Baxter. “I do consider us lucky to do those things that we did, but it was work.”

Some of that work involved dragging the seine nets through the river, as well as setting up hoop nets, to gather fish for study. From there, scientists would take tissue samples of fish for methylation analysis that let them see what sort of metal levels the fish were carrying. Those were the relatively simple methods they employed, Baxter says.

For the more advanced ones, his group teamed up with the Arizona Game and Fish Department for electrofishing work. This involved boating up and down the river using equipment that emitted mild electric currents to shock fish and momentarily paralyze them for easy collection. These fish were mostly gathered for stomach content analysis, Baxter says, that allowed researchers to see exactly what the fish were eating. Those efforts helped to inform the food web he and others were looking to build. In addition, data from the Game and Fish Department were used to help estimate sizes of fish populations under study.

Of interest to the scientists were all of the native and non-native fish living in the Colorado River, but there were two that had significance for the researchers: humpback chub and rainbow trout. The humpback chub is of concern because of declining populations that have netted it federal protection. For rainbow trout, they’re seen as valuable for recreational fishing and the economic impact that supports. “Glen Canyon is just upstream of what is Grand Canyon proper. Much of Glen Canyon was drowned with the construction of the Glen Canyon Dam. Its operations have consequences for Lee’s Ferry reach,” said Baxter. “Fish there are mostly rainbow trout. Downstream, the rainbow trout become less abundant and the management issue becomes maintaining remnant native populations of humpback chub.”

Looking at selenium and mercury levels in these fish is important because the metals can affect their development. The concentrations also help to show that the protected ecosystem isn’t nearly as sheltered as we’d like to think. Regardless of the manmade borders we put in place, pollution from other places can still find a way in.

Baxter notes that the roles the metals play in the food web overall is of similar concern.

“Studying the food webs that sustain fish populations of the Grand Canyon, both native and non-native, are helping us understand the terrestrial organisms that depend on the river,” said Baxter. “These include fish, insects and others. Our principal focus was understanding the energy pathways in the web of life that sustains fish in the Grand Canyon.”

The food web analysis revealed that concentrations of the metals were relatively high among sites compared with other large rivers. Going downstream from the Glen Canyon Dam, mercury increased, which is an indicator of biomagnification. Levels of the metals in organisms backed this up, with scientists finding that mercury concentrations exceeded thresholds for wildlife and humans by 6 to 100 percent. Selenium levels were found to exceed them by 56 to 100 percent.

The levels are high, Baxter says, but it’s important to keep in mind that the contaminants don’t respect the human boundaries we’ve set up to conserve the Grand Canyon. The Colorado River’s proximity to power plants, for example, contributes to mercury in its water, as does Lake Powell upstream, which contributes to mercury methylation in the river.

As for the selenium levels, Baxter says the geology of the Colorado River basin as well as its past and present climate hint at the likelihood that selenium concentrations could be naturally high there. Soil disturbances nearby, in addition to other processes, could also amplify delivery of the metal to the river.

“There’s a river near Pocatello, Idaho, that has mercury concentrations that are comparable,” said Baxter. “What’s startling is that they’re occurring in this area we’ve set aside (Grand Canyon National Park), and it’s hard to learn these areas are not entirely protected from these stressors.”

Adult rainbow trout considered in the investigation yielded another surprise, as scientists found that their metal levels were lower than other fish. This was one piece of good news, Baxter says.

As for how the results will be used, Baxter says they’ve already alerted scientists, the public and stakeholders interested in the health of the Colorado River to the fact that more investigation into the issue may need to be done. He and others are in the process of linking the concentrations info to their understanding of how energy in general moves in the river’s food web. And those analyses may result in closer monitoring to look at animals like birds, bats or insects and how they derive food from the Colorado River.

“It sets the stage for more questions. It’s part of just one thing that points to just because we’ve drawn lines on maps doesn’t mean we’ve protected fish and wildlife from the effects of this sort of thing. The decisions we make affect fish across the state, nation or even globally,” said Baxter. “Some components of mercury in the fishes could be very local, or they could be coming from some place in China. There’s a growing realization among scientists and the public that we don’t actually conserve areas only through drawing lines on maps.”