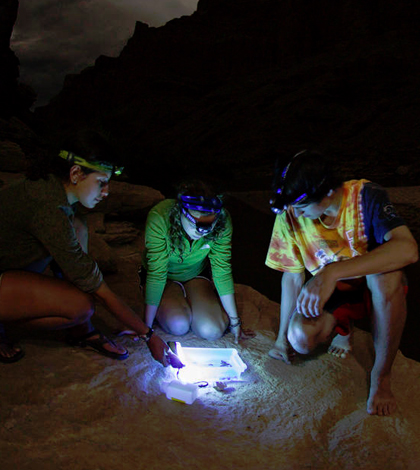 An investigation on the Colorado River led by scientists at the U.S. Geological Survey has found that some of fishes’ favorite foods — aquatic insects — may be greatly damaged by the practice of hydropeaking, or the momentary pulses of water released by dams in creating hydropower.

The research, informed primarily by data points gathered by citizen scientists, underscores the essential roles that insects play in the food webs of rivers. Findings of the work point to the possibility of reduced biodiversity downstream, something that water managers may be able to mitigate by using alternative hydropower practices.

Hydropeaking is a practice typically used when electricity demands go up, usually during daytime. The problem that it poses for aquatic insects is that the high flows it sends down the river can practically obliterate eggs.

Ecologically important insect groups, such as species of mayfly, stonefly or caddisfly, lay their eggs attached to rocks or vegetation slightly below the water surface, where they soon hatch. If water levels rapidly drop and expose the eggs, they can dry out and die before hatching.

The USGS study pinpointed how abrupt water level changes can affect aquatic insects in every stage of their lives. That knowledge can improve understanding of how to improve the health of rivers downstream of hydropower operations all over the world.

The research was based in part on a large citizen science project with more than 2,500 insect samples taken on the Colorado River in the Grand Canyon, downstream of Glen Canyon Dam. This dataset was collected almost entirely by river guides, educational groups and other citizen scientists. Researchers also tested the effects of Colorado River hydropeaking and abrupt water level changes on river health by comparing insect diversity across 16 large dammed rivers in the western United States that vary in the degree of hydropeaking they experience. Scientists tried to determine the ecological impacts of hydropeaking separated from other dam-imposed stressors, while identifying specific cause-and-effect relationships responsible for biodiversity loss below hydroelectric dams.

Hydropower provides around 19 percent of the world’s electricity supply, far exceeding solar, wind, and other renewable sources combined. Many hydroelectric dams are operated using hydropeaking, where water releases can vary by a factor of 10 or more within a day. These large hourly changes in river levels create artificial tides along river shorelines that freshwater organisms simply aren’t adapted to.

The virtual absence of mayflies, stoneflies and caddisflies from the Colorado River in Grand Canyon has puzzled scientists for decades. This study demonstrates that Colorado River hydropeaking, much from Glen Canyon Dam, is partially responsible.

Mitigation measures for managers to consider might include leaving river levels low and stable at times when impacts on power production at Glen Canyon Dam would be minimal, for example on weekends. This could allow insects a few days to lay their eggs with success.

If mitigation flows were successful, a more diverse community of aquatic insects could improve the health of the Colorado River ecosystem in Grand Canyon, scientists say, including helping the largest remaining population of endangered humpback chub.

The success of the project is largely due to the wide array of river guides, boaters and youth that contributed to an unprecedented database of aquatic insects. The citizen scientists collected more than 2,500 samples on the Colorado River in the Grand Canyon over a three-year period.

The full findings of the effort are available online in the journal BioScience.