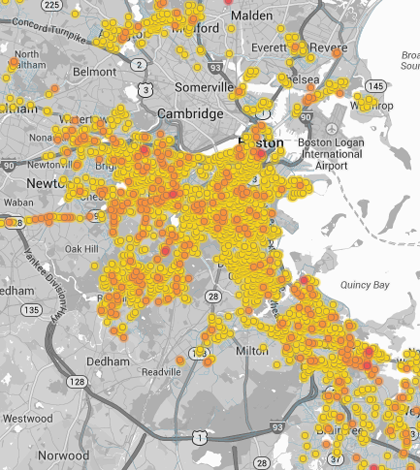 The cars of Google Street View are accustomed to transporting unorthodox passengers. A suite of panoramic cameras, laser rangefinders and GPS equipment ride atop each vehicle, gathering data and images for use with Google Maps and the company’s other projects. But a collaborative effort between the Environmental Defense Fund, Colorado State University and Google Earth Outreach is equipping Street View cars with instruments that will help map methane leaks in major cities across the U.S.

In addition to Google’s nation-roaming vehicles, CSU designed a car for intensive local monitoring and experiments. The Street View cars are equipped with a Picarro methane concentration analyzer that measures methane every half-second. CSU’s car sports a LI-COR 7700 methane analyzer, a more advanced instrument that captures methane readings up to 10 times per second.

George Burba, principal scientist at LI-COR Biosciences, developed the methane analyzer knowing that speed and precision would be necessary for the car-mounted instrument to take accurate readings as it toured city streets at 20 mph. His company, he said, was a clear choice for the other members of the study.

“It was a very important project for them of course, and our instruments have been known by them already and used in many different places,” Burba said. Those places include the rice fields of Southeast Asia, Arctic permafrost regions and various wetlands, among others. In many cases, methane leaks originate from natural gas pipes. Older cities such as Boston and New York are crisscrossed by aging pipes, releasing far more methane than newer cities such as Indianapolis. The methane leaks are not concentrated enough to be toxic or explosive, but methane emissions contribute to ozone formation, which is unhealthy at ground level. As a greenhouse gas, methane has 86 times the potency of carbon dioxide over a 20-year period.

“You want leak location and leak size — that’s the real goal,” Burba said. Determining those factors will help city infrastructure managers make necessary repairs and reduce methane emissions in their cities. Only recently, however, has methane detection technology been fast and reliable enough for use across entire cities.

“The real challenge of the project is not to make the map, but to develop the modern practical method for detection of leak sites,” Burba said. Older methods, he said, required the use of chemical solutions and drew too much power for practical applications. Burba noted an important secondary advantage of the methane-mapping study: public exposure. By making the public familiar and comfortable with methane detection methods, the study could help raise awareness about greenhouse gas emissions and climate change. While only a handful of major cities have been mapped, anyone can nominate their city for methane mapping at the Environmental Defense Fund website.