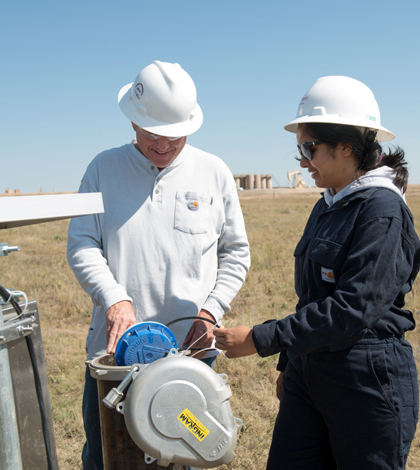 A new water quality monitoring network and data distribution platform designed for oil and gas wells around Colorado just might ease some of the tensions that have built up around hydraulic fracturing in the state.

Researchers from Colorado State University recently launched the Colorado Water Watch program with three groundwater sensor stations near active oil and gas wells in the Denver-Julesburg Basin. Data from the sensors are available for each parameter on the project’s website, which also processes the readings into a simple green-to-red spectrum that can let laypeople see if something is wrong.

Much of the controversy over fracking has been driven by a lack of independent, transparent data at drilling sites. This could help address that distrust, according to Ken Carlson, project lead and associate professor of civil and environmental engineering at Colorado State.

“It’s gotten to the point people cannot have a civil conversation about it,” Carlson said in a release from the university. “Everyone produces studies that back up their beliefs. This could lead to confusion and some people may feel they do not have enough information to make informed decisions.” An example of the data visualizations on the Colorado Water Watch website (Credit: Center for Energy Water Sustainability)

Conductivity serves as a surrogate for total dissolved solids, a measure of water quality that would almost certainly change significantly if fracking-related contaminants were suddenly present. A recently published study by Carlson and Water Watch team member Jihee Son found that oxidation reduction potential and dissolved oxygen measurements can help indicate the presence of methane, another contaminant associated with gas drilling.

“We wanted this to be based on sound, proven science,” Carlson said in the release. “We’ve spent a lot of time working on that and validating the system and our results.”

Though the data are available on the Water Watch site more or less straight from the sensors, the program also automatically analyzes the data to detect anomalies from background levels. That makes the website just as useful for scientists as it is for people who can’t make heads or tails of a oxidation reduction potential reading. In the website’s map view, for example, each of the three sites in this pilot phase of the project gets a colored dot that stays green when readings are normal and turns red when an anomaly is detected. When that happens, the Water Watch teams gets an alert and travels to the site to take a sample for analysis at an EPA-certified lab.

All of the sites so far are near wells owned by Noble Energy, which has funded the project along with the Colorado Oil and Gas Conservation Commission. The steering committee also includes members of environmental and industry groups.